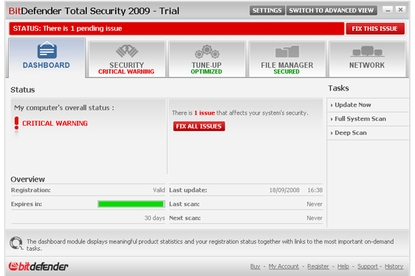 BitDefender Total Security 2009 offers good but not state-of-the-art protection, which is a pity as the product boasts a raft of neat features that make a small but noticeable difference.

'Total Security' is a bold claim, so BitDefender Total Security 2009 has a lot to live up to — and, by and large, it does.

So what's new in this year's BitDefender? On top of the usual improved anti-malware/firewall, anti-phishing, ID protection and parental controls BitDefender Total Security 2009 includes such goodies as flexible online backup, 2GB's worth, with support for incremental or differential backups, a secure storage space, aka File Vault, protecting personal information on your PC, IM encryption for Yahoo and MSN Messenger, central management of BitDefender installed on home network PCs, a less intrusive games mode (it helpfully spots ‘full screen' apps and asks if they are games) as well as better performance with lower resource consumption.

Another cute feature of BitDefender Total Security 2009 is the automatic scanning of devices you plug in, such as USB memory sticks or CD-Rs. A list of interesting additions, in other words.

The BitDefender Total Security 2009 user interface (UI) is largely unchanged — you get a choice of two; a basic, ‘big-button' dashboard to appeal to novices, and an advanced UI, for those who like to tweak. Either way, it's easy enough to master.

Scanning speeds are better with this version, although not the first time round — BitDefender Total Security 2009 ignores unchanged files, which noticeably shortens scan times.

Sometimes it can take several successive scans to remove persistent infections. And if BitDefender Total Security 2009 finds a damaged file that has been backed up online, it'll automatically replace the damaged file with the backed up one.

The firewall keeps those annoying pop-up questions to a minimum but not to the minimal levels of, say, Norton 360. Nevertheless, BitDefender Total Security 2009's is one of the better ‘suite' firewalls. Spam filtering is just as good, if a little slow.

When it came to efficacy, BitDefender Total Security 2009's ability to detect the various categories of malware is slightly unbalanced. The recent AV-Test.org test of security suites gave BitDefender an impressive 97.6 per cent detection score when it came to malware but only a so-so score of 87.8 per cent for spyware. This was more or less the same scores achieved by the 2008 version so detection rates haven't improved. Its rivals have, however, moved on and you can get near 100 per cent scores from the likes of Avira and Avast.