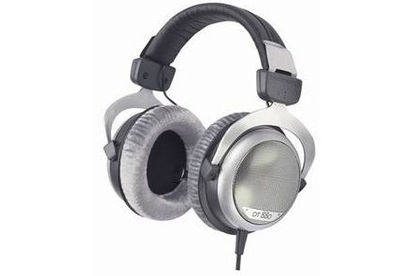 On par or better than the top of the line Sennheisers, but at a lower price, the BeyerDynamic DT880s are one of the best amplified headphones you can buy, short of spending $1000 or more.

The DT880s are BeyerDynamic's flagship headphones. Following on from their incredibly successful DT531, the later Beyers such as the DT770, DT880 and DT990 have captured many people's hearts with their unique sounds.

The DT880s are widely regarded as one of the most neutral headphones in the world. Most brands will add their own distinct colouration to the sound; Sennheisers tend to produce a bassy, dark aural signature, whilst Grados are quick, bright and fun. These headphones on the other hand are as close to the original sound of the recording as can be.

Many people will take this to mean that they are automatically the best, which is not the case at all. For some, the coloured sound of other models may simply sound better; many people find the Sennheiser sound incredible for classical music for example. For our money however, there is nothing quite like putting on a pair of DT880s and letting the music itself overwhelm us, as opposed to the headphone.

The problem this presents is that if you listen to poor recordings, the sheer accuracy of these headphones will expose all the flaws. Low bitrate MP3s will sound grainy and thin. To get the most out of the DT880s you need to be listening to CD quality audio, but when you shell out $400 to $500 on headphones that should really be a given.

You also need a headphone amplifier to adequately drive this model. The DT880s are a power hungry beast, and will sound lifeless without proper amplification.

Hook it up to the right components however and you will be greeted by a mind boggling symphony of sound. The luscious highs are smooth and ever so slightly emphasised (perhaps the only colouration the DT880s have) which gives piano based music a wonderful lively sound. Albums like Rocking The Suburbs by Ben Folds have never sounded so good to us.

The mid range is equally well presented, lending male and female vocals a sweetness that is nothing short of exquisite. Detail and clarity is incredible, allowing you to hear elements of your songs you never thought existed (you'd be surprised how often there are subtle sounds such as bells or children laughing in a lot of rock songs).

The most debated element of the DT880s is their bass. Some feel it is lacking, and compared to models like the Sennheiser HD600 it is missing a little, but what it lacks in quantity it makes up for in quality. The DT880s have quick, tight bass that has great impact. It may not have the booming sound some people like for their rap and rock music, but we found it to be both powerful and accurate at the same time. Bass-heads may be a little disappointed but the rest of you will find the bass on this model to be of exceptionally high quality.

Now whilst we hate to gush over any product, sometimes a product earns such praise. The DT880s have a phenomenal sound stage to complement their phenomenal sound. No other model in this price range offers the incredible immersion and three dimensional projection that the Beyers present. Music seems to hit you from every direction at once and if you close your eyes, you can visualise yourself watching the song live. This also has implication for gaming, offering brilliant positional audio for first person shooters.

Overall we found the DT880s sound to be wonderful for all kinds of music. Piano based tunes were our favourites, but acoustic guitar and even rock music went down extremely well thanks to the tight, quick bass.

As good as any pair of headphones is, if they are horrible to wear then they won't make a good purchase. When you pay for a pair of top quality headphones you want to be able to enjoy long listening sessions in audio heaven, and the DT880s don't disappoint in this regard. They have two full over the ear cups padded with soft velour, and are joined by a leather head strap. The cups are comfortable and balance well on the head although their open design does lead to significant sound leakage, so they may not be the best office headphones in the world assuming you don't want to incur the wrath of your co-workers.