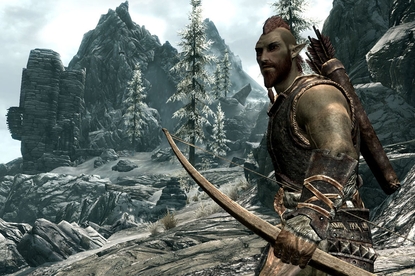 Even the game's extensive nether regions feel like the hand-sculpted, cheerless, cobwebbed, alien axe-murdering death-traps they're meant to, filled with icon-matching puzzles, body-skewering spikes, swinging half-moon blades, flammable pools of glistening liquid, and so forth. Speaking of, and to borrow a Gollum-ism, the area designers have been all kinds of tricksy: At one point while dungeon-delving, a steel grate collapsed under my feet, dropping me into a pool of water. Fumbling for a way out, I located a handle and pulled...which slammed shut the grate above me. I almost drowned before finding...well, I won't spoil it for you, but it's the thing that's been missing from prior Elder Scrolls games — the sense that every twist is unique, every turn handcrafted.

"He was formidable in battle yet behaved with honour..."

Some of the game's boldest choices involve omissions. It's indicative of how much the Elder Scrolls games have matured that they've finally abandoned classic Dungeons & Dragons attributes like "Strength" and "Intelligence" in favour of more pragmatic skills, say your flair with a given weapon, magical idiom, or criminal tool. As in Morrowind and Oblivion, progression depends on use, so if you want to be a better pickpocket, then pickpocket, or a better enchanter, enchant. Raise enough of those skills and you'll level up, whereby Bethesda folds in Fallout 3's brilliant perk system and lets you select from unique skill-specific abilities. Many offer over a dozen to choose from, several with their own rank-based subsets. And we're talking more than rote integer boosting: Pick "Silent Roll" under "Sneak," for instance, and sprinting while sneaking will execute a silent forward roll, or pick "Bullseye" under "Archery" and you'll gain a chance to paralyse your target for several seconds. It altogether amounts to one of the most intricate, cleverly-integrated, and satisfying character development systems yet implemented in a game.

Bringing those skills to bear on the world's inhabitants — and I'm thinking of the ones involving weapons and spells here — feels more physically present than it did in Oblivion, though in close combat, it still amounts to hammering your gamepad (or mouse's) left and right triggers. Combat's never been Bethesda's strong point, and while Skyrim one-ups Oblivion's battle mechanics with better connective physics and cool Fallout-3-like flourishes or "finishing moves," there's still room for improvement. This is shoot-the-moon wishing, but I'd love to see an Elder Scrolls game with Dark Souls' tactical versatility, or the Thief series' attention to light and shadow instead of Skyrim's simple distance and line-of-sight metrics. There's also an occasional sense of physical disconnection from the world that can mar your experience of it, such as characters that "glide" over the ground when walking, or your ability to stand, literally, inside the skeletal remains of slain foes (especially weird when they're big as houses). The "Creation" engine's collision detection could do with some touching up, though the only outright bug I encountered involved a horse floating hundreds of feet in the air (unless it was a magic horse, of course). 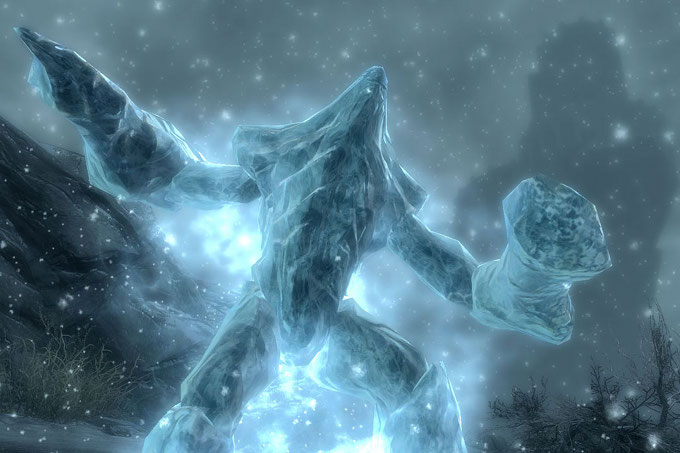