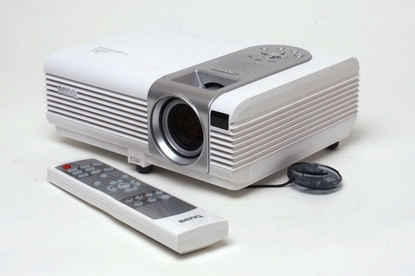 Clear, accurate colour output, a 16:9 native aspect ratio, and quiet operation make this BenQ home entertainment projector one of the best around.

BenQ managed to sell more projectors than any other vendor in Australia through the second quarter of 2005, and with models like the PE5120, it's easy to see why. The PE5120 fits into BenQ's Home Entertainment Series and features a white chassis with silver trim. The single-chip DLP model runs at a native 16:9 aspect ratio and has a resolution of 854 x 480 pixels, making it ideal for watching movies. The small, white unit can also scale 1080i content to fit, although the image isn't as clear as the output from a high-resolution machine. The PE5120 is portable at 2.9kg, and BenQ has even included a nylon carry bag to help get the machine from A to B.

The rear panel offers a USB connection, in addition to a DVI port, S-Video, component and composite interfaces. BenQ appreciates that this model is designed purely for home theatre and has opted to forego a speaker, anticipating the user will instead rely on a home entertainment setup.

The PE5120 features a large silver and white remote which allows quick access to just about every projector function, including source and aspect ratio selection; image properties like brightness, contrast, colour and tint; and keystone adjustment. Vertical keystone is provided, but you can't offset the image. This is forgivable in a home theatre environment where the projector will either sit on a coffee table or be permanently mounted to the ceiling, and there are three telescopic feet on the base to provide for fine adjustment.

The short throw ratio enables the projector to produce a 60" display from a range of 207cm, providing a large image in a relatively small room. The 200 watt lamp offers a maximum output brightness of 1100 ANSI lumens, with a contrast ratio of 2000:1. Eight preset modes allow you to quickly adjust the screen to suit the image type, and we found that the BenQ model did a great job of accurately reproducing colours and shades on screen.

There is a pair of fans on the rear panel next to the connectors, but the PE5120 remained remarkably quiet during operation and wouldn't be noisy enough to detract from a home theatre experience.