An inexpensive laptop with thief-catching ability! 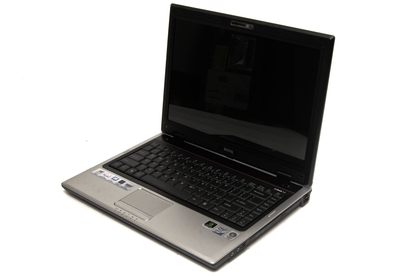 The BenQ Joybook R45 balances attractive design and lots of features against weak speakers and palm rests with heat issues. What tips the scales in favour of this notebook is its low price.

Although the BenQ Joybook R45's price of $1199 puts it squarely in the 'entry-level' notebook category, its good performance, chic style and wide range of expansion options means it's a laptop that shouldn't be underestimated.

BenQ's sense of style has been fairly impressive of late. From the Joybook S32B (BV14) to this unit's predecessor, the Joybook R43-PV03 (9H.0ESAP.V03), the modern styling has very much appealed to us. The Joybook R45 continues this trend.

Although the faux leather cover doesn't look like the genuine article, BenQ has managed to avoid the worst of pleather's usual sins, producing a rubberised surface that feels and looks pleasant.

Despite weighing just 2.5kg without the power supply and 3kg with it included, the notebook has an impressive array of ports and slots, especially considering it is only 34cm in length, 24cm in width and 4cm in depth. On the left, an ExpressCard/54 slot allows a wide range of devices, such as eSATA port enablers, to be connected and an HDMI port allows for an easy connection to be made to the latest home entertainment devices. On the right sits a FireWire connection. Four USB 2.0 ports allow for further connectivity. On the rear is a D-Sub port, which means you can easily connect to a projector or external monitor.

Instead of the typical button panel, only buttons for power and toggling the wireless adapter are present.

The full-sized keyboard is easy to use, and the keys are responsive, which should help cut down on spelling errors and aid touch-typing. After a few hours of use, however, the keyboard and palm rests are prone to heating up and this may cause some discomfort.

Instead of having speakers built into the main body of the unit, BenQ has installed them directly below the screen. They produce tepid sound and lack clarity and bass.

The screen itself has a very limited viewing angle and is fairly reflective, but it produces great colour contrast; DVDs are displayed without ghosting or dithering issues.

Above the screen is a two-megapixel webcam that works with the built-in microphone to provide easy Web conferencing — and security monitoring. With the bundled ArcSoft software, you can set the notebook to 'camera monitoring mode' so that the webcam will detect movement. If your laptop is stolen, the software will e-mail you a photo of the person using it once it is connect to the Internet.

Inside the laptop is a 1.83GHz T5550 Intel Core 2 Duo CPU and 1GB of DDR2 RAM. Graphics processing is supplied by an NVIDIA GeForce 8400M G graphics card, while storage comes from a 120GB, 5400rpm hard drive. That's plenty of space for Windows Vista, stacks of programs and personal files.

In our iTunes test, which strains the CPU by converting 53min of WAV files into 192Kbps MP3 files, the T5550's middling strength shows itself with a score of 1min 35sec. This is a little slower (by about 20sec) than we expected. The WorldBench 6 score of 70, however, is reassurance for users who wish to use the notebook for Web browsing, office programs and watching movies.

The weakness of the Joybook R45's graphics processing is made clear by the 3DMark06 score of 1105, which translates into an inability to play most modern games. In this unit, the independent graphics card is mainly there to facilitate content playback via the HDMI port. The NVIDIA card's advanced settings allow for the screen size to be adjusted when the laptop is connected to an HD-capable television. This is a useful feature, and many notebooks we've seen in the past haven't been able to do this.

In our worst case scenario battery test, the Joybook lasted 1hr 30min. Although it isn't a spectacular time, you'll still be able to watch many DVDs straight through. It's also a decent time considering the low price of the unit.

For connectivity, the R45 offers Gigabit Ethernet, which is a welcome surprise for an entry-level notebook; 802.11b/g wireless and a 56Kbps modem are also present.