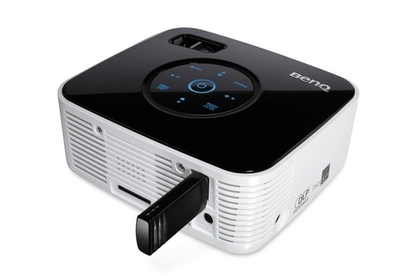 BenQ's Joybee GP1 is a nifty little projector, with a native resolution higher than DVD quality and a reasonable light output given its tiny size. The non-standard resolution might annoy some users, and the fan output while not noisy, wasn’t as quiet as we would have liked.

The BenQ Joybee GP1 is a portable projector that uses LEDs as its light source. This enables BenQ to design a very small device that fits in the palm of your hand — even so this projector has a reasonable light output and a DVD-quality native resolution. If you’re looking for a travel projector to accompany your netbook (or even a regular notebook), this is the device for you.

Just as the arrival of the netbook revolutionised the way people used their notebook computers, mini projectors are arriving on the market featuring LED lamps instead of the larger incandescent bulbs most models use. LED lighting’s compact nature allows projectors to be much smaller while still maintaining usable brightness levels and good image quality.

Unlike the other mini projectors we’ve tested, BenQ’s Joybee GP1 doesn't have an internal battery — it’s just like a regular projector, only smaller. With dimensions of 136mm, 120mm and 57mm (LxWxH) it’s not as small as other mini projectors on the market, but it would easily slip into the spare space of a laptop bag along with its power adapter. To keep its design compact, BenQ uses a break-out cable instead of regular ports on the rear of the projector — connecting to both composite and VGA video. The projector’s native resolution is 858x600 pixels, which is neither a 4:3 or 16:9 standard, but in our tests we were able to output at this resolution, using a Dell Inspiron 1545 laptop.

The BenQ Joybee GP1 mini projector doesn't have a zoom lens, but its fixed lens has a variable focus to allow it to create a sharp image of between 15 and 80 inches in size. The throw distance is range is between 75cm to 4m away from the projection surface, so it’s versatile enough to suit a range of display environments. We doubt many people will use the projector to display a 15inch picture size, but it can be done. Once focused, the image displayed is sharp and the projector’s resolution is high enough to display plenty of detail.

The projector lamp’s output rating of 100 ANSI lumens is certainly not impressive compared to the 2500-plus ratings of models like the Viewsonic PJD5351 and its ilk, but given that the BenQ Joybee GP1 is a mini projector using an LED lamp we think it’s acceptable. We used the projector in a range of test scenarios and found its performance was adequate in dark and dim rooms. When we ventured to a boardroom with south and east-facing windows — which allows a lot of daylight to enter —l the projector still managed to produce a visible image at an 80-inch size. In such bright conditions visible contrast drops significantly, but if you’re happy to tweak the settings you can still watch a movie or make a presentation.

With a contrast ratio of 2000:1 and using a DLP colour wheel system internally, the BenQ Joybee GP1 mini projector is actually surprisingly capable of outputting good images when used in a home environment. We tested it with a few DVD-quality movies and found it very capable at displaying the video footage, with good colour representation and dark area detail in our Batman Begins test footage. At the rear of the Joybee GP1 mini projector there’s a USB port from which you can play a variety of video and audio files. We found MPEG, WMV and AVI video support to be trouble-free and there’s also playback for JPEG and MP3 extensions. In these situations the internal 2W speaker is used to project audio — it’s not particularly loud, but it’ll produce reasonable sound in a small room. Using a USB port is a handy feature, as it means you don’t need a computer to display your presentation.

BenQ’s Joybee GP1 is a very portable mini projector. We recommend it as an addition to your travel bag — and it’s suitably sized to accompany a netbook — while it’s ideal for business presentations, it’s a useful device for impromptu movie-watching at home or in your hotel room too!