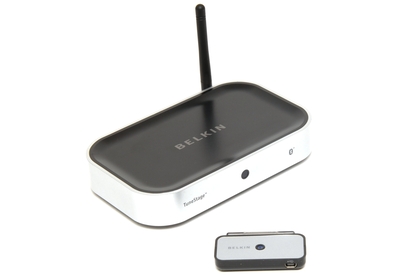 The TuneStage 2 isn't perfect and commands quite a high asking price, but it does a relatively good job of streaming your music wirelessly.

The Belkin TuneStage 2 is a device that enables you to wirelessly stream an iPod to a home stereo system, using the iPod itself as a remote control. In addition, the TuneStage 2 also lets you connect to a range of other Bluetooth accessories, including wireless headphones.

The unit consists of two main parts, a receiver that plugs into a stereo, and a transmitter that plugs into an iPod. Setting up the unit is as easy as plugging the included RCA cable into a free port at the back of a stereo, and using the supplied AC adapter to connect the receiver to power. We used the Panasonic SC-PT850W during testing, and plugged the RCA cable into its auxiliary port. A detachable aerial at the rear of the receiver provides a 10m Bluetooth range, while the unit can also be wall mounted if you wish.

Pairing an iPod is a fairly simple. Plug the transmitter into the iPod, press play and the transmitter automatically enters pairing mode, indicated by a fast flashing blue light on the front. Once connected to the TuneStage receiver, the light changes from flashing furiously, to flashing slowly. One particular annoyance is the lack of a button to automatically enter pairing mode. Each time you want to connect a new device (and subsequently put the unit into pairing mode) you'll have to press play on the iPod immediately after connecting the transmitter. A switch or button to enter pairing mode would have made life much easier.

Sound quality is reasonable and the quoted 10 metre range is effective, although the closer the iPod is to the receiver the better the sound. During our tests the signal remained fairly consistent and we didn't experience many drop outs. According to Belkin, the TuneStage can be interfered with by 2.4GHz radio waves; this includes many cordless phones, microwave ovens and wireless networks.

The TuneStage 2's transmitter also allows you to use the iPod with a number of Bluetooth accessories, including wireless headphones, or even a car stereo with Bluetooth. The catch is it that it will only work with devices that use the Bluetooth passcode 0000. Thankfully, most Bluetooth accessories do, and we used Motorola's Z9 headphones without any issues. Conveniently, the transmitter includes a USB port so you can charge the iPod while it's being used, and Belkin includes a USB cable in the sales package. Another sour point is the transmitter; if you're using it with an iPod nano, it's quite large and won't fit into your pocket easily.

Overall, if you really want to be able to play an iPod through your home stereo, and have the luxury of also using it with wireless Bluetooth accessories, then the TuneStage 2 is a decent choice.