The Belkin PlayMax Wireless Modem-Router (F7D4401au) packs in many wonderful features for a fast home networking experience. However, it gave us fits during our test period as it was very unreliable -- sometimes it would stay up for hours, other times for minutes. But when it worked, it was fast. If Belkin can iron out the reliability problems and make it a stable router, we'd happily recommend it.

Note: We recently upgraded this router with new firmware and this has fixed the reliability issues that we faced in our review. If you want a newer Belkin router, you might want to consider the N600 DB N+ Router (F9K1102v1), which is also dual-band, but it doesn't have a Gigabit switch.

Belkin's PlayMax Wireless Modem-Router (F7D4401au) is an all-in-one networking solution that will appeal to high-end users (including gamers). Not only does it have a built-in ADSL2+ modem, it also has Gigabit Ethernet, two USB storage ports, and dual-band 802.11n wireless networking. Best of all, its dual-band 802.11n operation is simultaneous, which means you can run both 2.4GHz and 5GHz wireless networks at the same time without having to switch between the two like you do on other routers, such as the Linksys WAG320N. With these features, we thought the Belkin PlayMax would be close to a five-star product; however, we experienced regular instability that made it a frustrating product to use.

Belkin PlayMax: Ease of setup and use

Despite being a high-end product, Belkin has put a lot of effort into making the PlayMax an easy-to-install router: simply plug in the phone line and Ethernet cables to your main PC and insert the included CD to initiate the software setup. The software goes through the settings you need to enter in order to get online, and it also installs extra applications and router monitoring software on your PC. 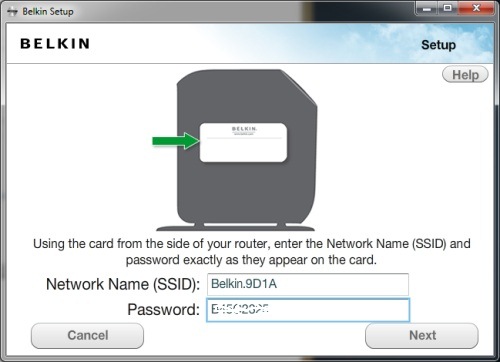 We're chuffed that one of the first things the setup asks you to do is configure the wireless network's security — on other routers, the setup wizards connect you to the Internet before telling you to set up your wireless network. You have to enter the SSID (network name) and password that are written on the router's label, which should be stuck to the side of the router once you unpack it (make note of the period in the SSID as it can be easy to overlook).

Straight after the wireless networking setup, the setup program contacts the router to check the connection. It takes a long time, so go make a cuppa. The next step is to enter your ISP connection type (PPPoE for most of us), and your username and password. That's pretty much it. 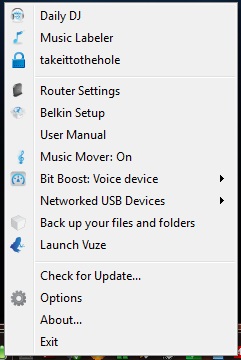 The PlayMax Monitor can be accessed from the Windows System Tray area and it allows you to launch some of the programs that ship with the router, such as Vuze. The monitor can also let you know if the router is offline (it will turn amber; we soon got sick of this colour).

While the setup CD is a nice touch, you'll still have to enter the Web interface if you want to give the wireless networks different names and passwords (which you should), and also to set up the URL and keyword filters and port forwarding. Most settings take a few seconds to take effect, which can be frustrating, and overall the interface feels too slow. It's worth noting that when setting up the wireless networks for the first time the router became unresponsive and we had to manually reset it by unplugging the power adapter and then plugging it back in again.

That was the first of many unresponsive bouts for the PlayMax Wireless Modem-Router. At first we thought it might be torrents overloading the router and causing it to crash, but the router was troublesome even when we weren't downloading anything. We noticed that the router would sometimes freeze in a routine pattern every 10min or so when we used the 5GHz network — other times it would stay up at least a couple of hours. It was a very temperamental router and what was frustrating was that the firmware on our router was actually newer (ver 1.00.33) than the firmware on Belkin's site. An automatic update initiated from the router found no new update either.

Nevertheless, when the router wasn't crashing, overall wireless performance was fast for the most part, but 5GHz performance was sluggish in our mid-range, 10m tests. Using the 2.4GHz radio from 2m away, the PlayMax achieved an average speed of 7.68 megabytes per second and from 10m away it averaged 5.97MBps. When we used the 5GHz network, transfers from 2m away were similar to the 2.4GHz speed, averaging 7.77MBps, but they were much slower from 10m away, averaging a disappointing 3.84MBps. We were hoping it would maintain a rate over 6MBps from that distance.

Using both the 2.4GHz and 5GHz networks simultaneously is the main benefit of the PlayMax, and they worked really well together in our short distance tests; we actually witnessed higher throughput than in the individual 2m tests. Performing simultaneous transfer tests from two different servers on our LAN, the 2.4GHz network averaged 8.2MBps while the 5GHz network averaged 10.2MBps. If the 5GHz network doesn't bring the router to a halt (as it did many times during our tests), it will allow you to experience great short distance wireless speeds. You could use one network to stream high-definition video to a TV in another room while the other network can be used for normal file transfers and Web downloads. However, because of the stability problems we experienced with the PlayMax, we still recommend the NetGear RangeMax WNDR3700 if you want simultaneous dual-band operation that works reliably.

The ADSL2+ modem in the PlayMax performed as well as we expected during our tests. Using the PC World Broadband Speed Test, it achieved an average download speed of 16.2 megabits per second (Mbps) and an upload speed of 846 kilobits per second (Kbps). These results are almost exactly the same as what the Buffalo AirStation WBMR-HP-GN wireless modem/router achieved in the same tests. Of course, the speeds you get you in your own home will be different, but compared to other modems we've tested the Belkin is definitely fast.

You could put all that speed to good use by downloading torrent files if you wish, and Belkin helps you out by supplying the Vuze torrent client and Torrent Genie. Torrent Genie is one of the 'apps' that ships with the PlayMax and it works in conjunction with Vuze to allow you to download torrents onto a USB drive attached to the router. It's called offline downloading — even if your PC is switched off and Vuze isn't running, torrents will continue to download onto the drive attached to the router. However, this feature isn't documented very well. 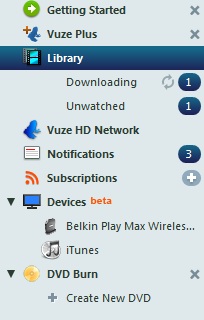 Offline downloading is convenient for when you want to continue downloading torrents, but don't want to leave your PC switched on.

To enable offline downloading, the Belkin PlayMax Modem-Router needs to be visible in the 'device' section in Vuze's left-hand pane (see the screen shot above). You need to right-click on the router and enable the option to store torrents on an attached USB hard drive. Then, for each torrent you want to store on the USB hard drive, you have to right-click the torrent and enable offline downloading.

The PlayMax will accommodate up to two USB hard drives, and unlike previous versions of Belkin's Wireless Storage Router, you don't need to install a special application on each computer that will be accessing the drives. In Windows 7, for example, you can just navigate to the Network folder, click on Router and then you'll be able to access the drives. We should point out though that the access speed from the attached drives will be slow (around 2.5MBps).

There are all sorts of other features available in the Belkin PlayMax Wireless Modem-Router, such as built-in QoS and keyword and URL filters. The apps are not very useful apart form the Torrent Genie app, and we don't think they should be much of a factor in your purchasing decision. Daily DJ can supposedly create smart playlists that can be played on DLNA devices — we couldn't get it to work during our tests. A backup app is supplied that can back up files and folders onto drives attached to the router — this also didn't work. 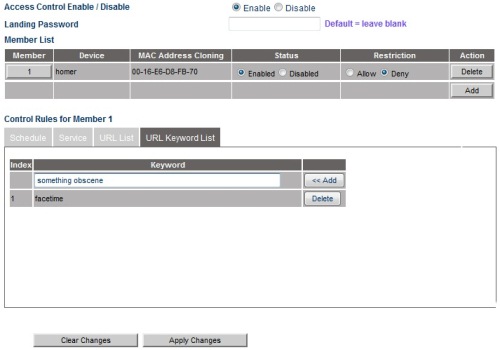 URL and keyword filtering can be bypassed by entering the router's password.

All up, the Belkin PlayMax Wireless Modem-Router (F7D4401au) is a great wireless router with stacks of useful features that are suitable for power users. A fast ADSL2+ modem, Gigabit Ethernet, fast 802.11n networking, simultaneous dial-band wireless networking and offline downloading make for a dream device. However, the instability we experienced can turn the PlayMax into a nightmare. We hope a firmware update is issued soon to make it a more reliable router.