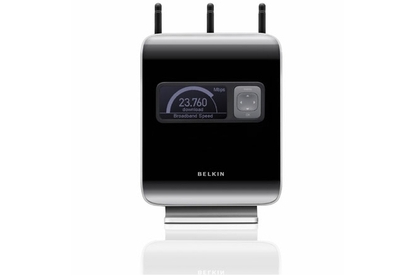 With a firmware update to support 802.11n-only mode and better throughput, along with a modest price cut, the N1 Vision would be almost 20-20.

It looks slick, but mediocre performance and a high price tag disappoint.

How can something so hip also be disappointing? Belkin's N1 Vision Wireless Router has style, a slick user interface, a gigabit Ethernet switch, and innovative features never seen before in a consumer Wi-Fi router -- features such as an LCD status screen and a browser-less security setup. It is also 802.11n Draft 2.0-certified (thus promising interoperability with other Draft-N devices), it has the best setup process we've ever seen in a Wi-Fi router, and its range is superb.

However, while the features are cool (and some are quite useful), mediocre performance and a sky-high price tag spoil the picture. For $385 we expect a top-performing router, but the N1 Vision was only as fast as non-gigabit 802.11n routers costing half as much.

That flashy LCD status screen is the Vision's raison d'etre. At 1.5x2.75 inches, you can't read it from across the room, but it's still useful. You can set it to show one of seven different informational displays, such as connection status/SSID/number of devices connected, current and maximum upload/download speeds, current connection speeds for each computer, Internet usage for each computer for the past 24 hours, and a date/time screen. While these displays are fun to explore at first, after a day or two they lose their novelty.

Of more lasting utility is the ability to set up security via the LCD, especially for guest users. The N1 Vision lets you set up a guest Wi-Fi Net with a separate password that is isolated from your private network, so that guests can't access your computers, servers or printers. And you can view and change security settings on the LCD, allowing a guest to have access right from the router without delving into the Web setup utility.

Also, if you have devices with Wi-Fi Protected Setup (WPS) enabled, the N1 Vision offers push-button setup so you don't have to know or enter long passwords. You first touch the WPS setup option on the LCD screen, and then the same button on your computer or other WPS-enabled device within two minutes, and you will be connected automatically. It's sort of like unlocking the door for two minutes to allow someone in.

Performance-wise, the N1 Vision scored 31 megabits per second on our midrange throughput tests, similar to the much-lower-priced Netgear RangeMax and Buffalo Nfiniti routers we tested previously. Those routers were limited by their non-gigabit wired sides, but the Belkin is not, so we expected more. We suspect performance might have been better if we could have set it to 802.11n-only mode, as on most other routers, but Belkin told us that the Atheros driver it uses does not allow this (although an update should be coming to enable the option). Running in mixed b/g/n mode takes a significant toll on Wi-Fi performance.

The redeeming feature was range, which the router, when paired with a matching PC Card, excelled at. The N1 card found an astonishing 23 different networks, including at least eight we'd never seen before with any other vendor's card. And we could connect with at least 3 or 4 bars of signal strength (out of 5) everywhere in the house, also a first.