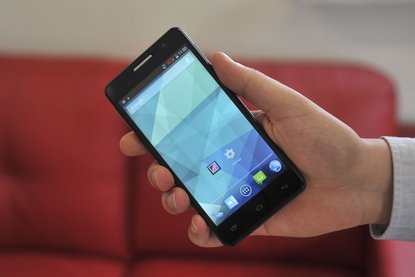 The Sphere makes no attempt to hide its inexpensive price. The smartphone looks like a slab of black plastic, interrupted by tacky chrome insets and an intriguing finger sensor. Its saving grace is that it is cheap at $279, but we’re not convinced the price is low enough.

Upfront is a 5in, 1280x720 resolution screen, which works out to have a density of 294 pixels-per-inch. These good numbers are spoiled by a screen that attracts fingerprints and suffers from extremely poor sunlight legibility.

Scroll through the specs of the Bauhn Sphere and you’ll be impressed. It starts with a 1.3GHz quad-core CPU, throws in 2GB of RAM and packs 32GB of internal storage. There’s even space for a 32GB microSD memory card.

It’s about here we spot our first red flag with the Bauhn Sphere. Although the smartphone comes with 27GB of free storage, only 1GB is reserved for applications. Once you download 20 or so applications, you won’t be able to update them or download new ones. Not being able to keep your smartphone updated robs you of third-party features and functionality. This, ultimately, is a deal-breaker.

The Sphere runs a version of Android 4.4 KitKat that has been hardly touched, save for a dozen or so third-party applications. These include various news on demand services, catch up TV services and a duo of Aldi’s own applications. Shipping with these apps is no problem, though not being able to uninstall unwanted apps hampers the experience.

There’s a sense of refinement missing from the Bauhn Sphere. Similarly specced rivals handle the near-vanilla software as though it’s silk. The Sphere keeps up most of the time, but every now and then it slips up with stutter.

Other inconsistencies thwart the experience. One of the capacitive buttons wears the multitasking icon, and yet it works as the dated ‘settings’ option. Another gripe is that this smartphone ships with the older Photo gallery and music player. Who wants a new phone marred by old software?

It appears Bauhn has stuck with the older applications as they support the gimmick of a touch sensor. The touch sensor borders the base of the rear camera and houses an LED light at its core. Swiping down triggers a red light, while swiping upwards switches it to blue.

The touch sensor makes it possible to swipe through gallery photos and music. It also doubles as a shutter key for those using the rear camera to take selfies.

Relying on the touch sensor means you won’t have to obstruct the screen when sifting through photos. The downside is it has been poorly implemented, with the only real support for swiping forward, and not backwards. You’ll end up resorting to the screen in any case.

Photos captured with the rear 8 megapixel camera underwhelm. The slow shutter leaves ghosting in some photos, while some feathering and image noise rids them of detail. The camera outperforms the ZTE V969, but it is far behind the Nokia Lumia 635 and Motorola Moto G.

Prying open the back cover of the Sphere reveals an 1800 milliamp-hour battery and slots for two SIM cards. The micro-SIM slot works with 3G networks, while the full-sized SIM will run exclusively on 2G networks.

The Bauhn Sphere is a poorly designed smartphone. On paper it reads like an attractive proposition, but living with the phone will reveal not enough thought, time and money has gone into its development.

Anyone considering the Bauhn Sphere should take a long look at its rivals first. The Motorola Moto G costs $10 less, is better built, has more refined software, packs two 3G SIM slots and offers superior hardware. Nokia’s Lumia 635 has the Sphere beat on the same points, except its single SIM is compatible with 4G Internet. Another smartphone worthy of consideration is the Kogan Agora 4G.