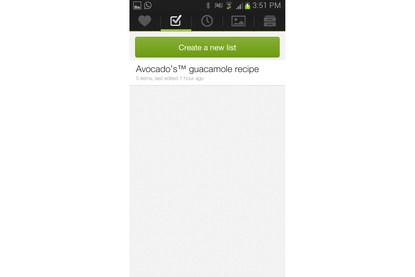 Avocado is still a fresh app, but it does have great potential. Once it gains more market traction, it will no doubt offer a plethora of features and allow complete content sharing. For now, it remains a simple but effective concept that allows you to stay connected with one significant person by sharing more than just text and images.

While it may be compared to the likes of popular over-the-top (OTT) apps such as WhatsApp and Viber, Avocado takes mobile communication to a greater level by enabling you to not only send texts and photos, but also share lists and events in an app designed for interaction between only two people.

Put simply, Avocado is made to allow you to stay connected with only one other person. On first launch you are asked to input your email and name, and then invite a person of your choice to the conversation. I use the term ‘conversation’ loosely as the app not only allows the sending of text messages, but also photos, lists, and events.

Avocado is still in its early stages, but this is its value proposition: rather than enforcing a single timeline interface which congests all content, this app is entirely dedicated to an organised and separated display.

Avocado is divided into five sections: Texts, Lists, Events, Images, and Settings (click on the images tab above to see the screenshots). These are represented by easy-to-understand thumbnails housed at the top of the interface, and are all fairly self-explanatory.

The Texts tab keeps things simple; it offers a timeline of text messages between yourself and the other person, and also lists activities (for example when someone creates a new list). Tapping the lightning button on the left of the text input area brings up options to add photos, emoticons, quick notes (which can be customised), or send a hug/kiss. The emoticons are disappointing -- instead of standard animations, you must either take a photo or upload one to represent an expression.

As the name suggest, Lists allows you and your partner to create a series of lists of whatever you need; shopping lists, recipes, to-do, and so on. You give each list a name, and can then add notes (eg: buy eggs). Each note can either be starred to signify priority/importance, or ticked to acknowledge completion.

The Events and Images pages are just as simple. The former lets you create calendar events with names, locations, notifications, repeats, and so on, and the latter is a gallery of pictures. It is important to note that, for some reason, you cannot zoom into photos within the app, but must save them first and do so via your smartphone’s gallery.

In settings, you are able to toggle notification sounds, set the tone, toggle preview on/off, select whether to save photos automatically. You can even set an unlock pattern if you want that additional privacy.

Avocado is far from perfect, though. There are numerous areas in which it can be enhanced, and this will no doubt come in the future.

Firstly, the app is still limited as to what content it allows to be shared. For example, it does not have video or audio capabilities so neither of these can be shared. Regular files (.pdf’s, as an example) cannot be shared either.

General operation of the app can be sluggish at times. You may experience lag when deleting posts, or even looking at photos. This does not always occur, though, and the delay is not unbearable.

In addition, taking full advantage of Avocado is only possible by upgrading to Avocado Unlimited (which is done through the settings tab). Unlimited enables unlimited photos and lists, adding images from Web search, early access to new features, and prioritised support. Not having access to these does not make Avocado a deal breaker in the slightest, but the $19.99 per year price, which covers both people, will probably result in many users settling for the free stuff.