A super-comfortable, well-crafted pair of over-ear headphones that are a joy to listen to 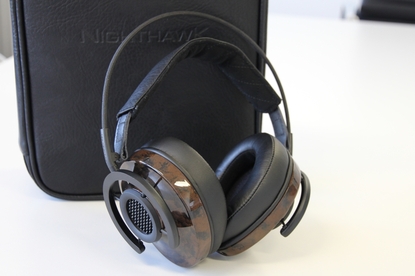 When you tell people that these headphones cost $895, people look at you sideways and dismiss them as a waste of money. A $100 pair of cans can do the same thing as these, surely, is what they'll claim. Yes, and no. What sounds good to some people, doesn't sound good to others, and audiophiles are a particularly fussy bunch by nature. That audience, as well as people who simply enjoy finely crafted products, is who AudioQuest is targeting with the NightHawk headphones.

They are not the type of headphones that you will use out on the street, or when commuting on public transport. They aren't even the sort that you could use at work. They are semi-open at the back and sound leaks out. This will earn you judgemental looks from your coworkers. They are the sort of headphones with which you'll find comfort in your favourite chair, plugging in to your favourite amp, and perhaps closing your eyes and letting the music take you away.

Their sound is impeccable, at least to this reviewer's ears, with all sorts of musical mess coming through loudly, clearly, and, most importantly, enjoyably. We could listen to these headphones for hours on end without getting tired; at least not tired of the headphones, but of the music, perhaps, when we repeated test playlists.

We plugged the headphones into a Rotel RA-11 amplifier, and played a mixture of FLAC and 320kbps MP3s through a WD Live TV media streamer that was being fed the files from an Asustor NAS device. The files were ripped from CDs. We favoured rock music from the likes of Pearl Jam, Rage Against The Machine, and Iron Maiden, but we also threw in jazz from Herbie Hancock, disco from the Bee Gees, various flavours of hip-hop (mainly from an artist called Kno, due to his heavy, yet atmospheric beats), and plenty of electronica from The Chemical Brothers and some other artists no one else has probably ever heard of.

For all the genres we tried, we revelled in the crispness of the delivery. At times, we felt as though the music was perhaps too crisp, but in a good way. The headphones gave us a glimpse of every single note being played, from the softest strum to the harshest thrash, and the bass was neither left behind, nor overdone. Smooth basslines, sharp kicks, and lots of 'boom' were all expertly handled. Vocals were natural, highly defined, and didn't succumb to the background.

It's hard to fault the sound of these headphones. As we've already said, they just produce an output that is enjoyable to listen to, even at loud volume. You don't get a sense of struggle from the drivers at all. The only thing we'll note here is that if you are listening on a computer or a mobile device, you might be left wanting a little more oomph. An external amplifier would be a wise investment, but if you're considering these headphones, you probably have one already.

AudioQuest is a company that has built its reputation making high quality audio cables for enthusiasts and professionals. It also makes the USB-based DragonFly digital to analogue converter (DAC). The NightHawk is the company's first pair of headphones, and it's not a product that it released on a whim.

Talking to AudioQuest, you get the back story about the philosophy behind these headphones, how long it took to refine the design of the drivers and the earcups (triple digits worth of revisions were made over a couple of years), the materials that have been used to create the headphones, and some of the innovations that have been made to produce a product that can perform with minimal harmonic distortion.

The main goal was to incorporate the elements of loudspeaker design in a pair of headphones. A good pair of loudspeakers uses a rigid enclosure that's dampened and tuned to produce minimal distortion and maximum performance for the large drivers that are installed. The NightHawk headphones are inspired by these traits, and some of the latest manufacturing methods have been used to bring them to life.

The speaker enclosures themselves have been made from 'liquid wood' (arboform), which is a material derived from the waste of paper manufacturing. The liquid wood material ends up with stiffness that is sought after in speaker design, for such purposes as dampening the sound and minimising distortion. Furthermore, the way liquid wood can be moulded means the earcups can be more easily shaped in a specific form.

For AudioQuest, this has allowed for an earcup to be shaped in such a way that the speaker driver sits at an angle, firing sounds directly into the ear canal. Another tidbit about the design concerns the lattice on the rear of the headphone, through which air is designed to escape the enclosure. This part has been 3D printed.

AudioQuest gave us a bit of a rundown on the speaker drivers inside these headphones, too, which is something we rarely get from representatives of more mainstream brands. It was refreshing to hear a company rep talk so openly about the speaker diaphragm being made of biocellulose, rather than the more common mylar, which, we're told, is more prone to distorting the sound at high frequencies due to its flimsiness. The biocellulose diaphragm is 50mm in size, holds its form better, and is attached with a rubber surround.

The magnet is also different from the norm, with AudioQuest claiming a patent on a new magnet design to drive the diaphragm. This patent concerns a gap in the 'motor' around the speaker coil, and it is said that this gap reduces distortion further. The science of all this is beyond us, but it is rather interesting to hear what goes on behind the scenes.

When you look at the earcups, you'll notice that they are not directly attached to the structural supports of the headphones. They reside on rubber supports instead, and this ensures that vibrations from the speakers don't travel up and around the structure. In fact, playing loud, booming music on these headphones didn't cause the earcups to noticeably vibrate or move around. They felt rock solid as the bass was pumped.

Comfort is a big issue for big headphones, and a design challenge that AudioQuest has tackled with great success. The exterior of the padding on the earcups is perhaps as soft as it gets; it's made using a blend that includes egg shell protein. The earcups sit over your ears, not on them, and they are suspended from your head by an elastic headband that gives a perfect fit almost anytime. It's a band that applies virtually no pressure to the head. Separation is present between the band and the structure that holds the headphones in place.

At 337g for the headphones alone, they won't weigh you down. You can attach either a lightweight or heavy cable, as both are supplied, with the heavier cable being more advanced in its composition, but these don't affect the overall weight too much in a typical, seated environment. It's not a stretch to say that these are among the most comfortable headphones we've ever donned.

These headphones are about appreciating the finer things in life, and are a piece of audio gear that can invoke as much emotion in the owner as the music that's listened to. They are not a purchase to be taken lightly, especially if you are an aspiring audiophile, but they are also by no means the most expensive headphones in their field.