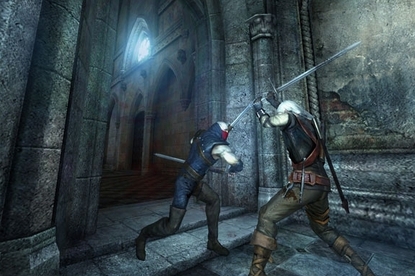 The Witcher is an extremely fun game with the nasty habit of succumbing to narcolepsy at the most inappropriate moments.

CD Projekt's first foray into the RPG genre takes us through the story of Geralt, a mutated monster-hunter known as a Witcher.

The game is a non-stop action romp that submerges you in a dynamic world full of mystery and gritty realistic storytelling. But rather than go on about what this game is, let's look over what it isn't.

First, this is not a child's RPG

The Witcher earns its Mature rating with lovely blood spatter, overtly suggestive themes and the option to jump into bed -- and sometimes cavern floor -- James Bond-style with many of the lovely ladies Geralt encounters on his journey. The world a Witcher lives in is a brutal one, and you'll often do things or come across people doing things that turn your stomach, but that's what sets this game apart and makes it great.

The Witcher isn't a morality tale

There are no clear-cut choices in the branching discussions you have with various characters in the game. Your choices are neither right nor wrong as you are faced with ambiguous situations affecting your course of action. An excellent example of this is the tutorial sequence, where you have the option to aid a Sorceress with battling a mage or face a giant monster called a Frightener. Each option will give you a completely different outcome to the tale, and it is up to you to decide where Geralt goes.

Choice is important even behind the scenes, thanks to an extensive branching talent system, and the choices you make when doling out your limited talent points across a wide variety of skills affect what Geralt will become. There were a few skills we consciously ignored -- how bad ass can a Witcher be if he runs about picking daisies? -- but later realised were required for story progression, making us rethink our talent point choices.

This game is damn pretty as it incorporates a resounding musical score and scenery so beautiful it will make your eyes bleed. The over-the-shoulder camera bounces behind you wherever you go, making you feel like you're in a Braveheart-esque action-adventure film. You'll be so immersed in the game that there will be moments when you'll forget you're not watching a movie and realise you have to interact with the action.

The character models are some of the best we've seen, each with their own personality and charm -- and when their charm fails them, they have some pretty nasty scars. Even the user interface is streamlined and beautiful; your screen real estate is maximised so that you can see as much of the environment as possible.