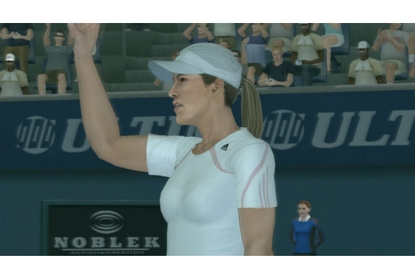 Let this middling tennis game be a lesson to why you shouldn't port a PSP game to the Xbox 360.

In a world where the Virtua Tennis and Top Spin series provide a fun and somewhat realistic interpretation of the sport, there simply isn't much room on the Xbox 360 for a PSP port as slow paced as the experience found here.

Smash Court attempts to be a simulation heavy interpretation of the sport, but unfortunately this results in a slower paced game that lacks the excitement of a real tennis match. At least the game offers the player a plethora of shots such as lobs, slices, topspins, and drop shots.

Controlling the Flow of the Match

The controls feel decent yet somewhat mushy. Sometimes your player will simply refuse to swing his racket at a ball that is very hittable, and return balls seem to have a mind of their own. You can hold the left analog stick all the way left, only to have your ball float lazily towards the centre. The only real way to effectively win is to rush the net, because playing the baseline feels far too random. Furthermore, the computer can hit aces at will while your player stands there dumbstruck.

At least the game gives you a variety of options to get your tennis fix on. There is an arcade mode in which you climb a ladder towards a tournament championship, which feels redundant because of the available Pro Tour mode which offers the same gameplay experience.

When in Pro Tour, you can create a player from scratch and take through the life of a professional tennis player. You can play mini challenges to acquire new sponsors, play charity events, enter tournaments, and unlock new apparel for your player. Even player stamina must be taken into account before entering too many tournaments in a row, lest you play like you're running in quicksand.

Online play is a nice addition, but as of this writing, the servers are absolutely deserted. In four attempts I was only able to get into one match, and that single victory catapulted me onto 28th overall in the world rankings.

Graphically speaking, Smash Court Tennis 3 blatantly shows its PSP roots. The real life players are not very detailed and lack smooth animation. The courts themselves are lifeless and lack activity. The lack of an announcer or clear court sounds completes the utterly average presentation.

Let Smash Court Tennis 3 be a lesson as to why handheld titles should not be ported to the Xbox 360. What was passable on the PSP ends up only slightly better than mediocre on beefier hardware. There are superior (and cheaper) tennis alternatives on the Xbox 360.