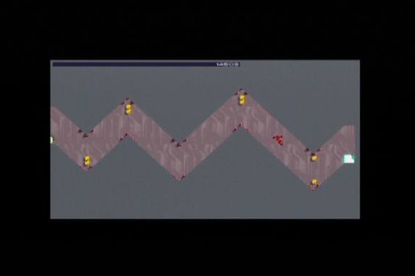 While N+ is a polished game, I am fine leaving N as a nice Internet distraction, even if the controls aren't quite as tight as when you play these handheld versions.

First of all, you know N is a free Web-based game, right? Ok, you probably liked it pretty well, then, huh, if you're willing to pay for N+. It's a likeable game! Who doesn't want to procrastinate by wall jumping around as a sprightly little ninja, getting blown to smithereens by obnoxious robots, or falling to your doom in a hip 'n fresh old school, styled arena platformer?

So what do you get for spending budget price dollars on a hard copy? A variety of challenging levels to start with, a level editor so you can mastermind impossible feats of ninja daring, and access to a Wi-Fi community where you can upload levels for other players to try, play and rate the levels of those other players, and decide who really knows how to make those ninja work!

The PSP version is nice not only because it's less of a pain to get online, but also because it has a higher resolution screen so they don't usually feel bad putting the whole arena on there. The DS uses the top screen to show the overall map, but it's sort of tiny, so the bottom screen is a zoomed in view. Actually the levels included in the two different versions appear to be, if not completely different, than at least noticeably so — perhaps an incentive for the true N addict to purchase both.

Personally I'd say the real draw to go beyond the browser game is if you really want to create your own N levels, which personally, I don't. Don't forget, N+ is already an XBLA game for just 800 Microsoft points, a cheaper option unless you really want to draw your custom levels with a DS stylus.