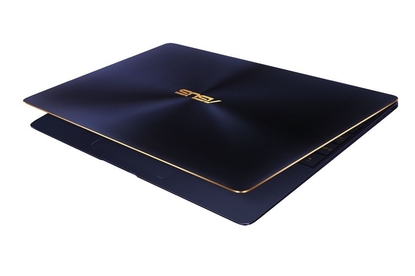 If you're in the market for a powerful ultraportable, this ticks all the boxes. But it's even more expensive for Australians and that hits its value score.

Asus also does a nice job with battery life on the ZenBook 3. Despite the more power-hungry CPU, this laptop lasted just over eight hours in our video rundown test, which involves running a 4K movie file on loop in Windows 10’s native Movies & TV app.

That’s 100 minutes longer than Surface Pro 4, which has a similar panel size but a higher-resolution touchscreen and a slightly smaller battery. On the flip side, the Kaby Lake XPS 13 lasted 3 hours and 15 minutes longer, but its battery is about 50 percent larger than the 40-watt-hour pack inside the ZenBook 3. It’s unclear how the MacBook and its 41.4-watt-hour battery would do in a similar rundown test, but with that lower-watt Core m processor, we’d guess it’d be perhaps an hour or so longer than the ZenBook 3.

Asus touts the ZenBook 3 as a superior MacBook alternative, and I’d have to partially agree. In a lighter and almost equally compact package, you get a much faster processor—one that better matches up with the fast storage and RAM paired with it. The fan noise you get in exchange for that power is very tolerable. It’s more of an audible hum than a noisy jet-engine roar.

I even think that the one area that Asus downgraded (relative to the MacBook) is a smart decision. While the MacBook features a 2304 x 1440 display, the ZenBook 3 sports a less glamorous 1920 x 1080 screen. I’d argue that on a 12.5-inch screen, the lower resolution is far more comfortable to work with.

But Asus didn’t finish its beatdown on its most obvious rival. The keyboard could use a lot of improvement, and it’d be nice if that USB-C port had a faster controller for data transfers. (That latter point kills me a little, since the machine is so packed with high-end components otherwise.)

If you don’t give two figs about Apple and just want a compact Windows machine that’s easy to carry around, well—the ZenBook 3 is really portable. I carried it to and from work on public transit without noticing it too much in my backpack. It performs well, too. So if you can live with just one USB port, there’s a lot to like. If you can’t—well, there are plenty of excellent ultrabook competitors to choose from. You’ll just have to pick a different feature that compromises on something you don’t care about.