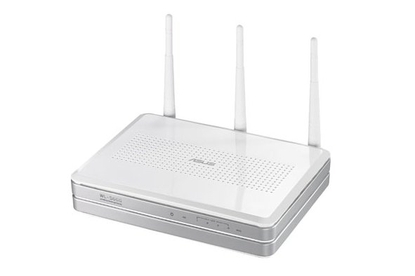 This is an excellent router for short-range file transfers and can be tailored to provide great performance over long distances, up to 50m away.

Using the third generation of Airgo's True MIMO (multiple-in, multiple-out) chipset, Asus has laid claim to having the world's first 802.11g wireless router (for an ADSL or cable connection) that is faster at transferring data than a wired 10/100 Ethernet network.

With a wireless speed rating of 240Mbps (megabits per second), the Asus WL-566gM can theoretically move data at up to 30MBps. A 100Mbps Ethernet connection tops out at 12.5MBps. Theoretical speeds are never reached when transferring data across networks, mainly due to data overheads and encryption (we tested with WPA AES).

To gauge the real-world Ethernet and wireless performance of the router, we connected two PCs to its 10/100 Ethernet ports and we also used a notebook equipped with an Asus WL-106gM wireless adapter and conducted data transfer tests.

Our 717MB test file was transferred over the 10/100 Ethernet ports at an average of 8.14MBps. With the wireless network, over a distance of 1.5m the same file averaged a data throughput of 6.18MBps. This transfer rate did not beat the Ethernet connection for speed, but it's the fastest rate that we have moved data across a wireless network. At a 10m distance, the same file averaged 5.35MBps.

However, the quick transfer rates of this router did not translate to faultless video streaming across a wireless network. Set at 240Mbps, we experienced occasional stuttering while watching DivX files from our file server (at 10m away), something we had not experienced with MIMO routers in other tests. Throttling the wireless speed to 108Mbps fixed this problem.