Output via your USB port 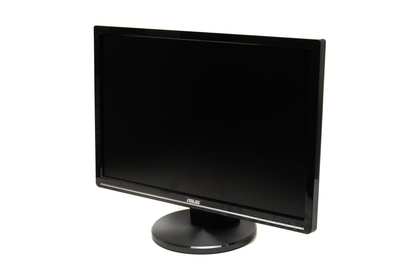 Offering the ability to connect to your PC directly via USB, ASUS' VW223b is a very cool product but its lack of DVI and unsuitability for entertainment tasks mean it won't be everyone's cup of tea.

It's not every day we get a product through the offices that genuinely makes us go "Wow that's pretty cool!" In fact when you see as much tech as we do, even slightly interesting developments begin to become mundane. However ASUS' latest 22in display, the VW223b, which you can run via a USB connection, was certainly enough to elicit some excitement.

The idea of ditching standard graphics cables (DVI, D-Sub etc.) altogether may sound improbable to most PC users, but that's exactly what this device allows you to do. A simple driver installation followed by a reboot and you're up and running in just a few minutes.

Once the cool factor had worn off, we began to think about practical applications for this product. For many users, USB connectivity won't be particularly useful. If you only have a single display, there's no real reason not to just connect directly to your graphics card like always. Where this product really shines is when running multiple displays.

The technology that makes this work is called EzLink, which also offers the ability to daisy-chain multiple displays together using the USB ports on the monitor's side. While we didn't receive a second unit to confirm this, it is supposed to be a simple plug and play operation, allowing users to run multiple displays without upgrading their graphics cards or other components.

This simplicity and cost effectiveness does require some sacrifices. When running via USB, the VW223b cannot really be used for video playback or gaming. We ran several media tests, and whenever there was a lot of action on screen things would stutter and frames would be dropped, which made it basically unwatchable. While testing with the game F.E.A.R. the HUD flickered constantly as we moved around. While none of this surprised us — the bandwidth of USB 2.0 is only so big — it is important to note this unit isn't going to be suitable for entertainment tasks.

In our DisplayMate Video Edition tests the unit performed a little better, although there were some niggling issues. Contrast was excellent, with nice differentiation between blocks in the intensity ramps at both the dark and light ends.

The image was a little soft at times and this seemed worse when connected to a laptop that outputs a high resolution by default. We tested on our desktop PC as well as a 1920x1200 resolution notebook and we struggled to get a proper resolution when using the latter.

Colour balance was pretty good, tending towards a slightly pale look, although reds were strongly saturated. Black levels were pleasing if not particularly noteworthy, although they were somewhat marred by reflection from the glossy bezel of the screen, which sometimes creates a slightly pale ring at the screen's edges (mainly the bottom). There was also some very noticeable flickering in a couple of the moire test patterns.

All of these tests were conducted via a USB connection. One of our big disappointments about the unit is that although a D-Sub connection is included ASUS has strangely left off DVI. This seems odd given it is standard for any PC from the last few years. So if you do want an alternative to USB you're stuck with D-Sub, which is far from a perfect solution. We ran our tests again via the VGA port with similar results; if anything the flickering mentioned earlier was even worse.