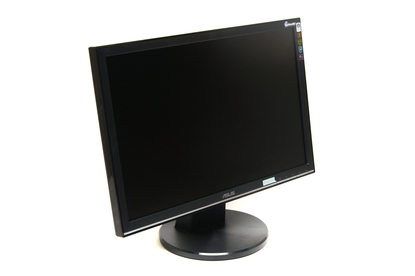 While the VW202T displayed good colours and contrast, it isn't vibrant. Its black colour also isn't rich enough. For everyday applications, however, and for use in an office or at home, it's well suited, and the wide aspect ratio means that two documents can be worked on side-by-side.

The ASUS VW202T is 20in in size and sports a widescreen aspect ratio (16:10), making it suitable for either the home or office. It can be used for productivity, watching movies, viewing photos and for gaming. Its 1680x1050 native resolution is ideal for lining up two documents side-by-side, but widescreen movies will still have black bars at the top and bottom.

The rear of the monitor has VGA and DVI ports, so we tested with the latter on a Windows Vista system with an ATI Radeon HD 2900XT graphics card.

In DisplayMate, the monitor's greyscale suffered from a slight yellow discolouration, and noise was also noticeable in mid-range and dark-coloured grey blocks. This wasn't immediately noticeable in our photo tests, so it's not a major problem. Apart from that, the monitor's colours were very good, albeit slightly muted. DisplayMate's colour scale tests showed good contrast between colour intensities and photo tests backed this up. Photos with shadowed details, gradations and fine patterns were displayed with good clarity and without a hint of banding.

However, the monitor did look a little dull overall. Turning up the brightness too much drowned out subtle, light colours, so we had to settle for a picture that lacked vibrancy. A one-touch button on the front of the monitor allows for preset environments to be invoked -- theatre, night-time, standard, scenery and game -- and these can boost the brightness of the monitor, as well as the contrast, but they made the screen look too oversaturated and muddy during our tests.

The monitor's contrast was good, as mentioned previously, and this was also shown in DisplayMate's Black Level test, too. All dark grey levels on a black background were visible in this test; however, the black itself wasn't rich enough -- it looked a little pale. This was particularly noticeable when watching DVDs in a dark room, where the bars above and below the movie were more of a dark grey than black, and it also showed in some of our test photos. Some backlight seepage was noticeable in the DVD tests, too, and while the backlights were visible in the middle of the screen, the corners were a little dark.

For watching movies and gaming, this monitor is well suited, but we did notice minor ghosting in our document-scrolling tests. DVDs were handled well, with good contrast in dark scenes, and they didn't look blotchy nor overly pixelated at the monitor's native 1680x1050 resolution. The monitor's DVI port supports HDCP, so it will play back Blu-ray movies, as long as all other components in the PC (graphics card and playback software) are HDCP-capable, too. During our tests Blu-ray movies looked great.

This 20in model has an advantage over 22in models -- its dot pitch is smaller. That means that lines should look smoother on this monitor, and during our tests, we didn't notice any abnormal jagged lines.

Physically, the screen looks elegant and had a round base. The base, even though it's round, doesn't allow for swivelling, only tilting. The screen can be viewed adequately from the sides, luckily, but there is a loss of brightness.