Looking for strong processor performance? We've got you covered. The Asus Vivobook Pro 15 OLED is a fast mid-range laptop that won't annihilate your wallet.

OLED displays were once a rarity in laptops. That began to change in 2021 thanks to a new wave of mid-range OLED laptops led by Samsung's Galaxy Pro line. The panels in Samsung's laptops have found their way to numerous mid-range Windows laptops, including the Asus Vivobook Pro 15 OLED.

There's a lot to like about the laptop aside from the display. Asus packs in strong processor performance for a mid-range 15 inch laptop. Battery life is great for the category as well. 3D performance isn't as impressive but good enough to hit 60 frames per second in many games. However, the Vivobook makes mistakes in design and connectivity that will make it unappealing to professionals. Despite its name, this Vivobook is better suited to gaming and general productivity than professional audio, photo, or video editing. Getting this much power and an OLED display for just $1,099 is a bargain if this laptop fits your needs.

But don't forget the price. Asus offers all the above for just US$1,099 (AU$1,799). That undercuts high-end alternatives from Dell and HP by about US$500 (with optional OLED panels equipped). The gap makes it obvious Asus isn't trying to beat premium laptops on design or build quality. Instead, Asus hopes to pack so much power for so little cash that you'll happily overlook a few nitpicks.

The specification sheet lists the color as Quiet Blue and, boy, is it right. It's so quiet, in fact, that I doubt most would call it blue if not asked to take a second look. The laptop's matte metallic finish, which seems to suck ambient light into another dimension, doesn't help it stand out.

It's not showy, then, but it is stout. The Vivobook Pro 15 feels tough and rigid when handled – surprisingly so, given how severely it undercuts the competition on price. Opening the display doesn't reveal obvious flex and handling the laptop by an edge or corner doesn't cause the chassis to groan in protest. You'll find flex by purposely twisting the display or hammering the keyboard, but it's not far off the HP Envy 15. 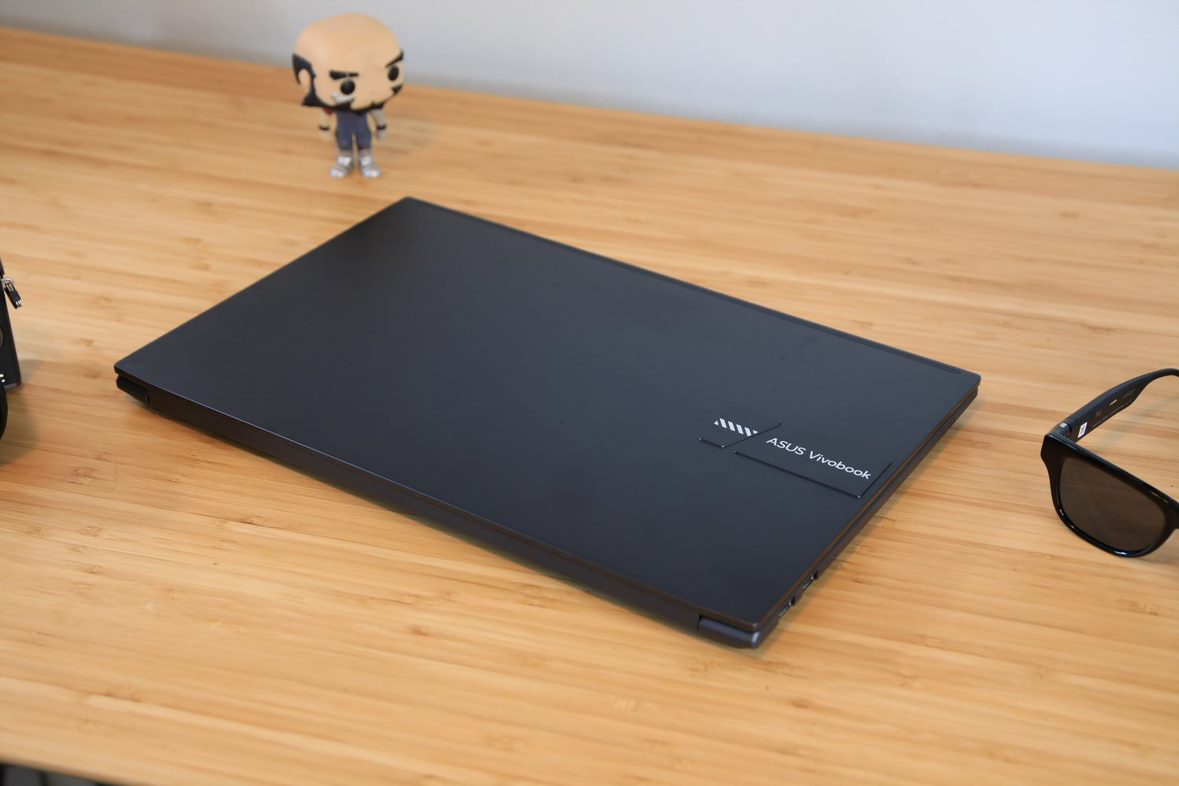 This good first impression is soured by the keyboard. Key feel is okay, with decent travel, but the bottoming action is vague and the key caps feel cheap. This is where the Vivobook Pro 15's low price is most noticeable. The keyboard does the job but is miles behind leaders like the Dell XPS 15 and Apple's new MacBook Pro.

I'm also not a fan of the layout, which offsets the keyboard to cram a small numpad into the right side. I don't think this best serves the needs of most people. Still, those who need a numpad will see this as an advantage. The XPS 15, Envy 15, and MacBook Pro all lack a numpad.

The touchpad is mediocre. It's large enough, to be sure, but the surface doesn't feel distinct from the surrounding palmrest. This occasionally caused confusion when I tapped slightly outside its border, a frustration enhanced by the offset keyboard layout. I also had trouble with the touchpad detecting multi-touch input I didn't intend. 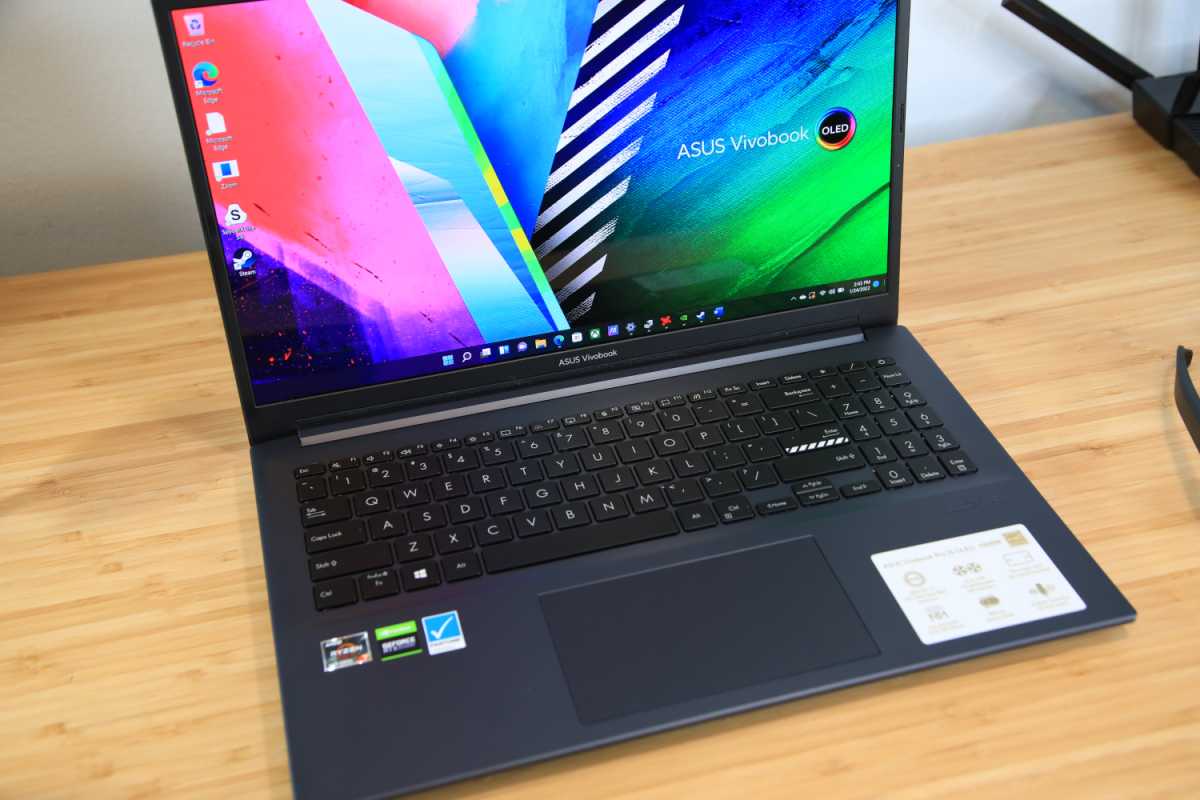 OLED displays are finally going mainstream in laptops and, surprisingly, they're not that expensive. Asus' Vivobook Pro 15 OLED benefits from this trend. It delivers an outstanding 15.6-inch 1080p OLED non-touch display at an affordable price. I measured a maximum contrast ratio of 427720:1 which, in practical terms, is near perfection. Areas of the screen that should appear dark show are deep and rich while those that should be bright are vivid and brilliant. There's no noticeable ghosting behind moving objects and no blooming around bright objects.

Color performance is exceptional. The display hits 100 percent of the DCI-P3 gamut and 98 percent of the AdobeRGB gamut as well as 100 percent of sRGB. Color accuracy is excellent as well. You could spend more on a standalone monitor and see worse results. Let's talk about brightness next.

The display sustains a maximum brightness of 384.9 nits. That's fine for most folks but can look a bit dim in a sunlit room. This is bad news for HDR, which needs a higher level of brightness to really stand out from SDR. So far, so good, but the OLED display does have an issue: resolution.

The problem isn't sharpness. 1080p on a 15.6-inch screen looks crisp from a few feet away. However, the limited resolution makes large images more difficult to edit and puts 4K video editing out of reach (on the laptop's display, at least). The 4K OLED alternatives available on the XPS 15 and HP Envy 15 are better suited for professional work.

As for audio, the built-in speakers are fine. They sound clear and crisp in most situations. But, like many laptop sound systems, they become overwhelmed by heavy bass. Maximum volume is high enough for use in a quiet room, but can struggle to compete with background noise. 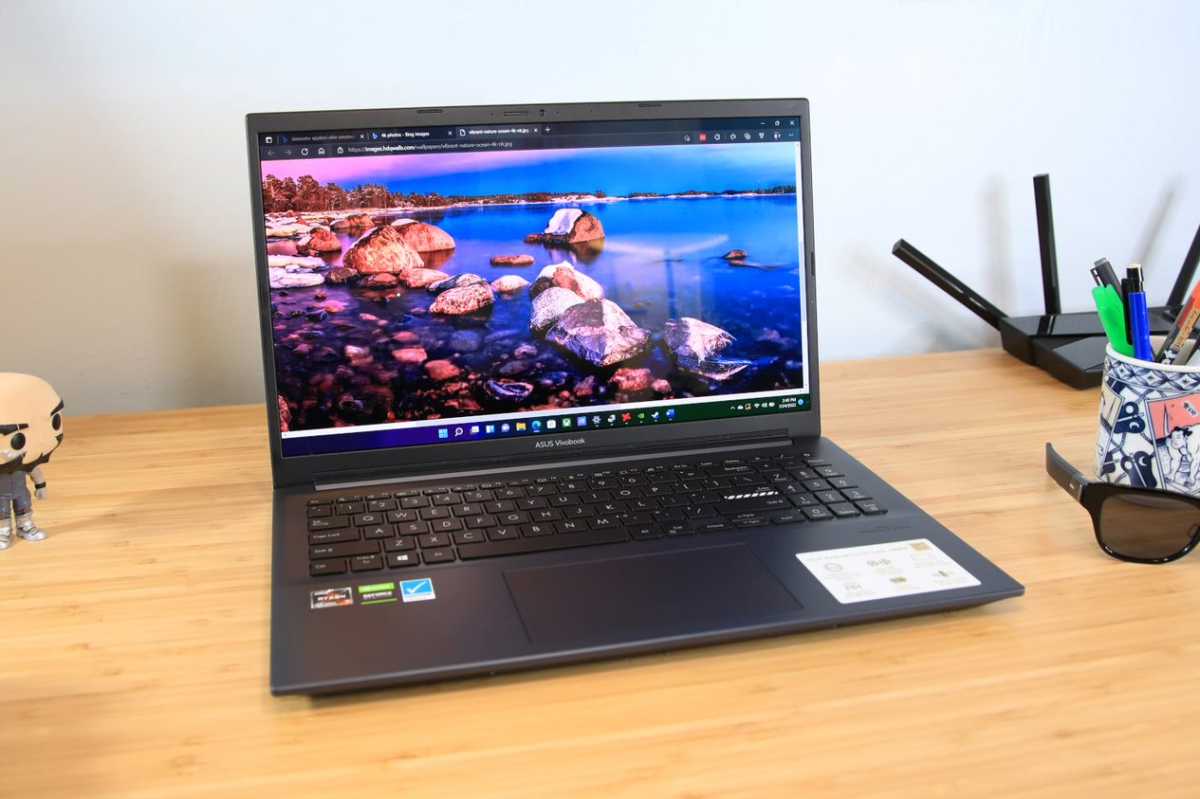 A basic 720p webcam is crammed into the Vivobook Pro 15's thin display bezel. It delivers the grainy, flat image quality Windows laptop buyers have come to expect. A privacy shutter is included at least. The microphone array is better, picking up clear and crisp audio in most situations.

The webcam lacks an IR sensor, so Windows Hello facial recognition isn't supported. Asus instead includes a fingerprint sensor in the power button, but it's unreliable. I often had to log in using a password after the fingerprint sensor failed.

Connectivity, or lack of it, is the Asus Vivobook Pro 15 OLED's most serious flaw. It packs a total of three USB-A ports. Two are USB 2.0 while the third is USB 3.2 Gen 1. The laptop also has a full-sized HDMI port and a Micro SD card reader.

There's one USB-C 3.2 Gen 1 port, but it lacks DisplayPort alternate mode or Power Delivery. That's a problem. The Vivobook won't be able to connect with monitors over USB-C. Most USB-C docks won't work properly, either. The USB-C ports will function, but the video port won't and you'll still need to connect it to its power adapter even if the hub supports power delivery.

You'll have to make do with one external monitor as well because the HDMI port is the only dedicated video out. Technically, the USB ports could be used to connect a portable monitor, but I doubt that's what most owners have in mind. Even the MicroSD card reader is a miss. Full-sized SD cards are far more common among professional photographers and videographers. MicroSD can be used in some cases, often through an adapter, but it's not ideal.

Wireless connectivity includes Wi-Fi 6 and Bluetooth, as is true of most Windows laptops. Wi-Fi 6E will begin to arrive in laptops this year, but it's not here yet. 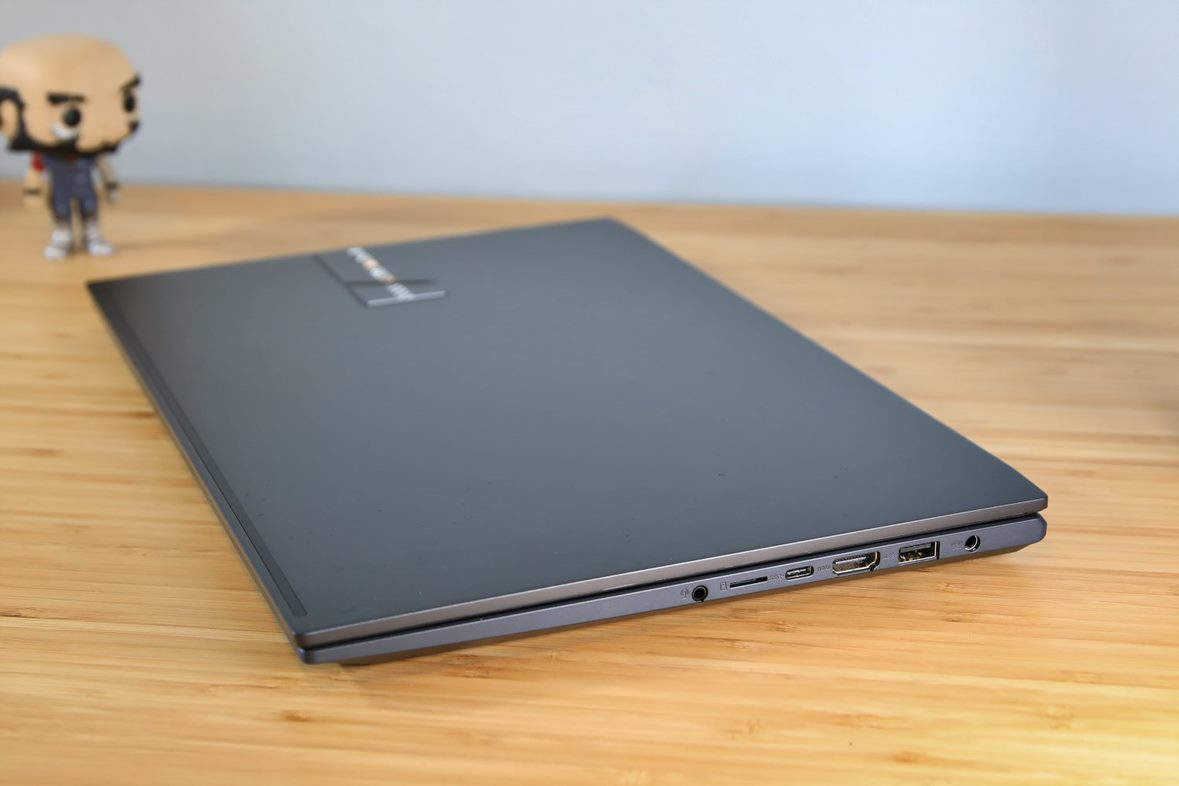 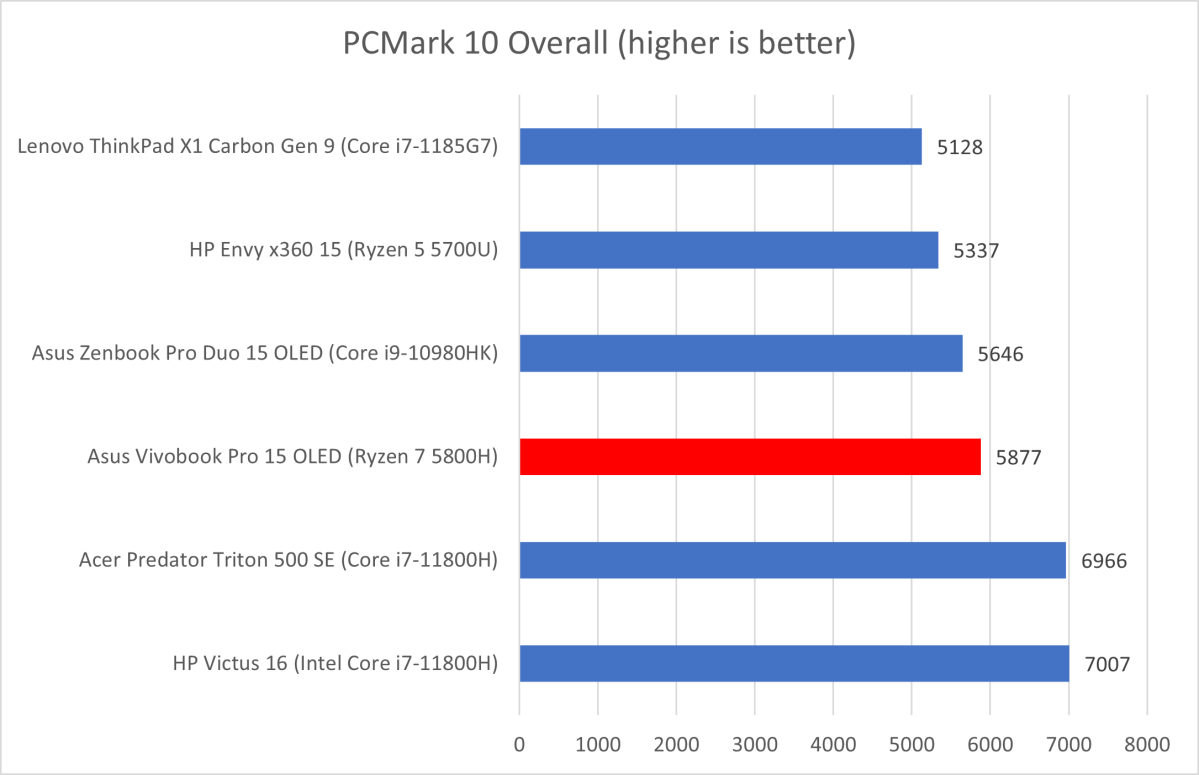 PCMark 10, a synthetic productivity test, turned in a favorable result of 5,877. This is far from the quickest performance available in a laptop, as competitors like the Acer Triton Predator 500 SE show.

However, laptops that outperform the Vivobook Pro 15 OLED are typically a bit larger and heavier than the Asus. With that in mind, the Vivobook's result looks strong. It beats other mid-range laptops we've recently tested, such as the HP Envy x360 15. Surprisingly, it even beats the older Asus Zenbook Pro Duo 15 OLED, which we tested with an Intel Core i9 10th-gen processor. 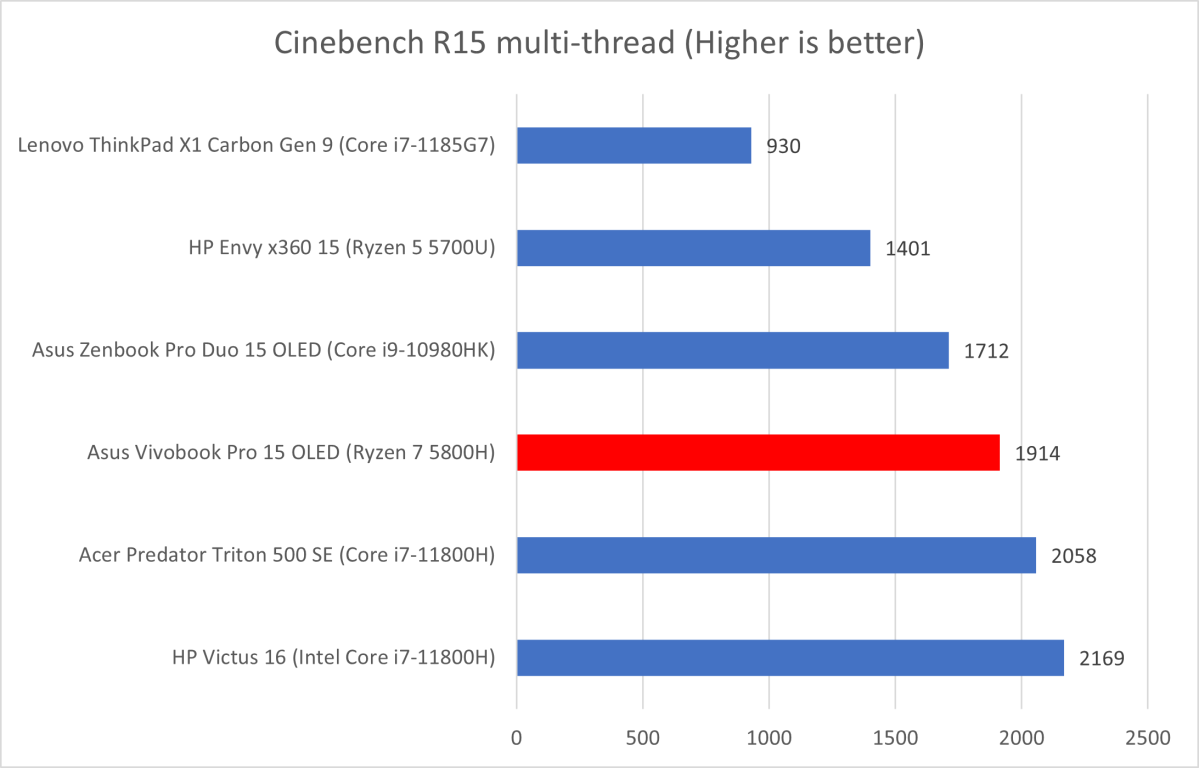 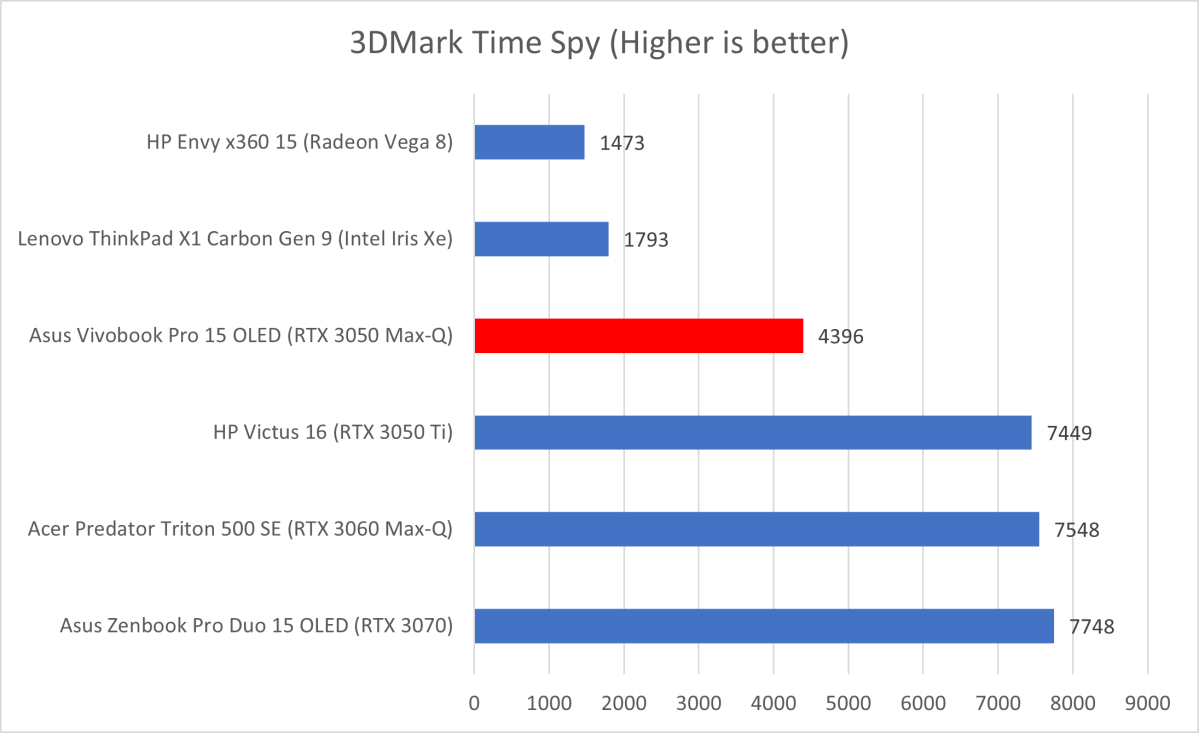 3DMark Time Spy, a synthetic 3D benchmark, is harder to interpret. It's clear the Vivobook Pro 15 OLED is much quicker than laptops that rely on integrated graphics such as the HP Envy x360 15's Radeon Vega 8. However, the Vivobook ends up far behind the RTX 3050 Ti in the larger HP Victus 16. This isn't a shock, as experience has shown that GPU performance can vary drastically from one laptop to the next even if they look somewhat similar on paper. Still, I was hoping to see the Vivobook score closer to 5,000.

Real-world game performance fell in line with the Time Spy results. The benchmark in Shadow of the Tomb Raider averaged 62 frames per second at 1080p with high graphics. Civilization VI averaged 66 FPS at 1080p with high graphics. Both games were tested in DirectX 12. These results are not going to blow anyone's socks off. The HP Victus 16, a true mid-range gaming laptop, hit 95 FPS in Shadow of the Tomb Raider. But remember – the Victus 16 is much larger. It's also a bit more expensive. The Vivobook's gaming performance is a decent value and certainly a huge step up from a 15-inch laptop with integrated graphics.

Asus ships the Vivobook Pro 15 OLED with a 63 watt-hour battery. This is a modestly sized battery for a 15-inch laptop. Many 13 and 14-inch systems, like the ThinkPad X1 Carbon, have a battery nearly as large. 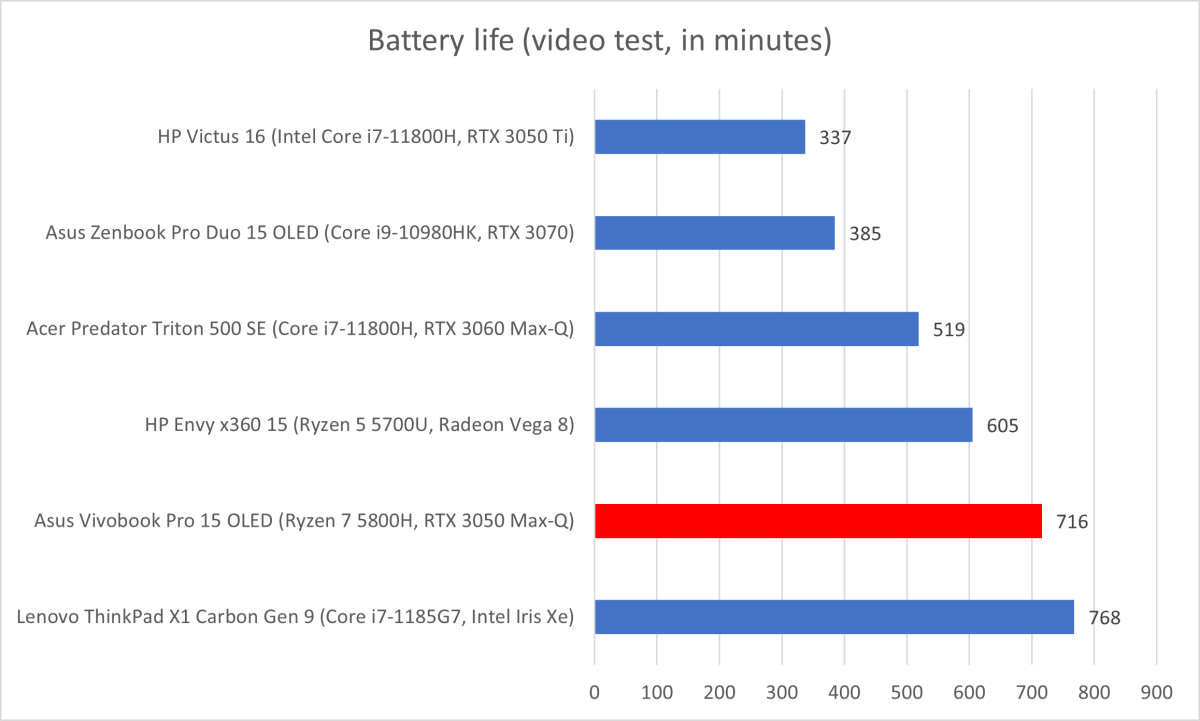 Despite this, the Vivobook did well in our standard battery test, which loops a 4K video in the Windows 10 Movies TV app with the laptop in Airplane mode. It ate through a full charge in 11 hours and 56 minutes.

That's a great result for a laptop with discrete graphics. It beats the HP Envy x360 15, which has integrated AMD Radeon graphics, and is about one hour behind the Lenovo ThinkPad X1 Carbon Gen 9. Of course, demanding tasks can suck the battery dry more quickly. An afternoon of video calls and light photo editing used more than half the battery in under three hours. You'll need to bring the power adapter if you plan to exercise the laptop's full performance potential.

Your opinion on the Asus Vivobook Pro 15 OLED will have everything to do with what a Pro laptop means to you.

If you view Pro as a signifier of performance, you won't be disappointed. The Vivobook Pro 15 OLED isn't screaming fast but performs well for its price and includes a top-tier display as a bonus. Asus is delivering a lot of value. If you want it for professional work, be wary. It makes unfortunate connectivity choices including a hampered USB-C port and a Micro SD reader instead of full-sized SD. The display's meager 1080p resolution could be a problem, too.

Still, the Vivobook's performance makes it a good choice if you want a fast mid-range laptop that won't clean out your wallet. It's especially appealing for students and frequent fliers who need a well-rounded laptop for gaming, streaming, and day-to-day productivity.