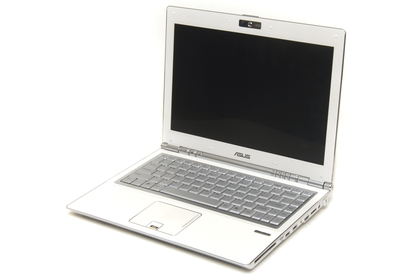 Although we are unable to fully test this product right now, the concept of a notebook with 3G and GPS built-in is a promising sign for the convergence of mobile technology. However, the inclusion of e-SATA and HDMI already puts up a few gold stars for the ASUS U3S.

Dressed in white, with a leather palm rest, the ASUS U3S looks very suave. But it's not all about looks with this little machine. Joining the ranks of notebooks such as the HP Pavilion HDX9003TX and ASUS's own G2S, the ASUS U3S offers the latest in notebook connectivity, including an HDMI port and e-SATA. But it doesn't stop there.

It seems that the 13.3in notebook size is gathering some impetus as the new look for 2007. At this size, the ASUS U3S does not have the bulk of a 14in or 15in notebook, but doesn't seem quite as pokey as notebooks with a 12in screen. However, its slim stature disguises what is actually a rather feature packed system, which includes built-in 3G and GPS using software-based GPS.

According to ASUS any Australian 3G carrier can be used. As for the GPS, an aerial is included, but you must purchase the GPS software separately. Unfortunately, to cram all this new hardware in, ASUS has opted to use an external optical drive, rather than an internal drive. A powered USB port resides on the notebook for this device.

The U3S has a very solid feel to it, without being heavy. The contrasting silver of the keyboard adds to the design, and the keyboard itself is quite comfortable to type on for reasonable periods of time. Although the U3S never gets uncomfortably hot, in high performance mode we found it made a lot of fan noise.

Fortunately there are a few quick shortcuts built into the hinge between the base of the notebook and the screen, which can quickly turn the notebook over to power-saving mode and other performance settings. Also found here is a button for brightness presets.

We are currently waiting to test a fully-functional version and give the 3G and GPS components a run for their money. Keep tuned for the final review.