Despite some software stability issues that need to be ironed out, the ASUS Transformer Pad TF300 is a competitively priced Android tablet that offers plenty of bang for your buck. The keyboard dock is a genuinely impressive add-on and makes the Transformer Pad stand out amongst bland competition.

The ASUS Eee Pad Transformer Prime is arguably one of the best Android tablets on the market and ASUS has stuck with much of the same formula for its latest release, the Transformer Tab TF300. It's a slightly cheaper version of the flagship model sacrificing metal for plastic and adding a bit of thickness in the process.

The future of tablets?

In slashing the cost of the Transformer Tab, ASUS has had to make some sacrifices. The new model is heavier (635g) and thicker (9.9mm) than the Transformer Prime and is constructed largely from plastic rather than aluminium. These changes aren't all bad news — we feel the Transformer Pad is a relatively light tablet that isn't a burden to carry around. Further, its rounded corners make it easy to hold in all orientations and the weight feels evenly distributed.

That being said, the build quality of the ASUS Transformer Tab can't quite match the Transformer Prime. The plastic backing, imprinted with a large swirl design, exhibits a little flex when some force is applied and feels rather hollow. It also creaks when pressure is applied at various points. Disappointingly, ASUS hasn't repositioned the speaker — it's covered by your right hand when holding the tablet with two hands, muffling the sound. 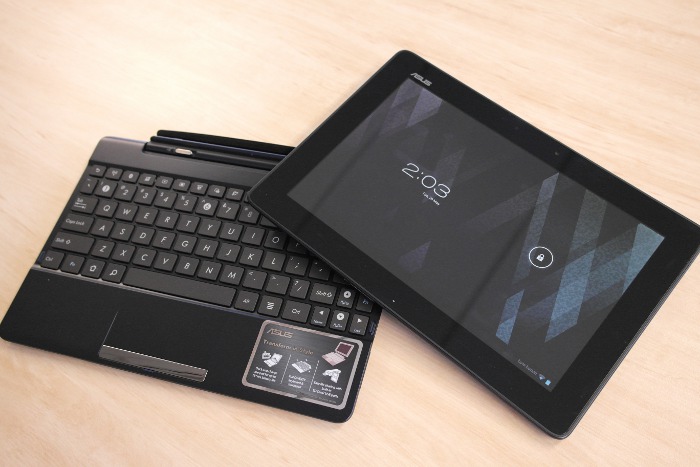 The Transformer Pad TF300's 10.1in screen uses a regular IPS panel rather than the brighter IPS+ panel of the Transformer Prime. In most cases the Transformer Pad's screen is bright enough not to be an issue. It offers impressive viewing angles and good colour reproduction but it does lack the vivid brightness of the Prime, especially if you're using it outdoors. The glossy screen is also very reflective under sunlight.

As a stand alone tablet without the keyboard dock, the ASUS Transformer Pad has a volume rocker, a micro-HDMI port, and a microSD card slot on the left side, a small power/lock button (with a handy LED built-in) on the top, and a standard 3.5mm headphone jack on the right. The proprietary ASUS dock connection on the bottom may be an annoyance, but it offers two benefits: it connects the tablet to the keyboard dock, and charges much faster (around an hour and a half) than a regular micro-USB charger could. 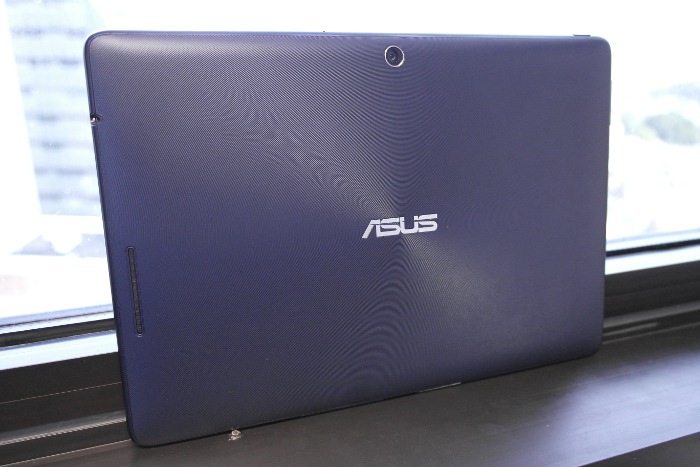 Transform with the keyboard dock

When connected, the Transformer Pad TF300 folds over onto the keyboard dock and acts like a regular notebook. Connecting the two does feel a little clunky, though the arrows on both the dock and the tablet are a nice touch: line them up to ensure a smooth and hassle-free connection.

The keyboard itself makes typing easier and more effective than a touchscreen, but it's far from perfect. The keys aren't backlit, the layout is a little cramped compared to a full-sized keyboard and the typing experience on the whole feels a little flimsy. The biggest annoyance is the middle of the keyboard which noticeably flexes when tapping keys around the centre, including the space bar. 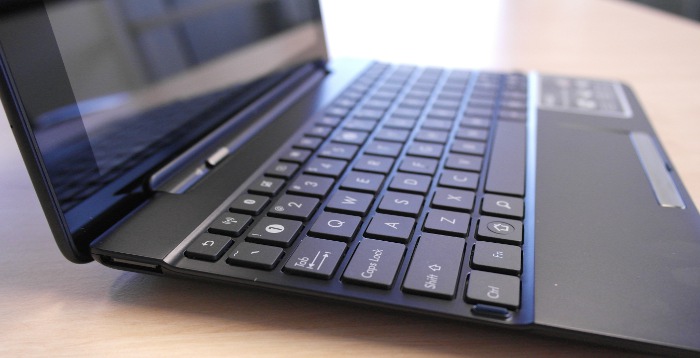 We love the addition of dedicated Android shortcuts including home, back, search and settings keys, along with a wealth of quick toggles for the trackpad, Wi-Fi, Bluetooth, brightness, Browser, screen shot and media controls. There's also a button on the keyboard to lock the screen, which is handy if you want to keep the Transformer Pad folded open.

The keyboard dock has a touchpad and you can use two fingers on it to scroll up and down on Web pages. It's very easy to accidentally bump when typing though, so we suggest turning it off via the shortcut button when you aren't using it. We would have appreciated an automatic setting that disables the trackpad when you type. You can't use gestures on the Transformer Pad's trackpad, so pinching to zoom, for example, can only be performed on the screen of the tablet. 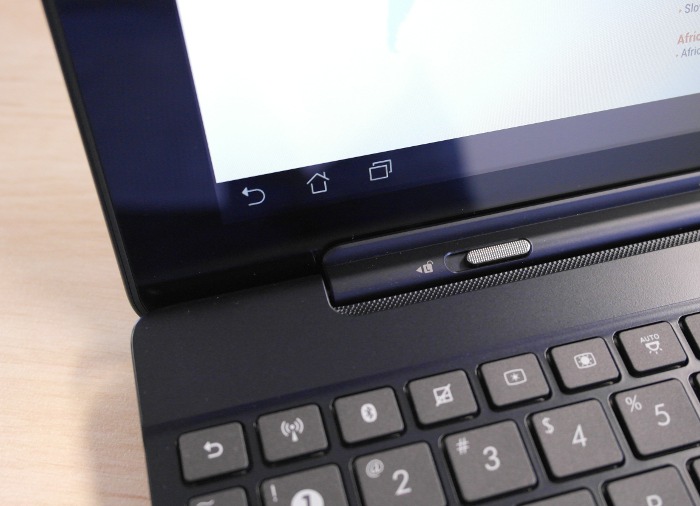 A scoop of Ice Cream Sandwich but disappointing performance

The ASUS Transformer Pad TF300 comes with Google's latest Android 4.0 "Ice Cream Sandwich" operating system. The software (version 4.0.3) is largely a 'vanilla' version of the OS, though ASUS includes a number of exclusive apps. Additions include a file manager, a MyCloud storage app with 8GB of free storage, a MyLibrary books app, and a MyNet app for streaming multimedia content via DLNA. The MyCloud app offers one year of unlimited cloud storage and works similarly to the popular Dropbox service. ASUS also includes handy e-mail, clock and weather widgets, along with a battery indicator that displays two separate percentages for the tablet and the dock battery.

For most part, the ASUS Transformer Pad TF300 offers a smooth user experience, much improved over previous generation Android tablets. Home screens scroll smoothly, pages in the Web browser load quickly and apps open and close instantly. Sadly, however, the Transformer Pad is still plagued by small issues that detract from the overall user experience. The browser will occasionally lock for a few seconds, unable to scroll. Various third-party apps, including Facebook, Evernote and Google Drive, crashed on more than one occasion during our review. The default Web browser works smoothly one minute, but is sluggish and unresponsive the next.

Although we have no doubt these small issues will be corrected with future software updates, this seems to be a common occurrence with Android tablets. When it comes to software, many of these devices constantly require software updates to correct issues that should have been ironed out long ago. To be fair to ASUS, this largely seems like an issue for Google but the fact remains that a tablet sporting a blazing fast quad-core processor should not be lagging during general use. 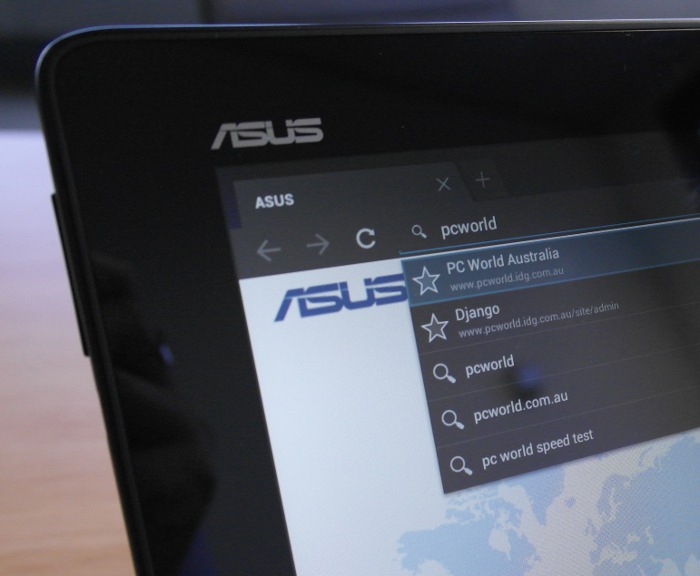 Further, Android's most significant tablet issue — third-party apps — remains unresolved. There are minimal apps in the Android Marketplace that are specifically designed for tablets, so most of them simply expand to fit the Transformer Pad's screen. Default Google apps like Maps, Gmail and YouTube work excellently, and there are a few popular apps like Angry Birds, Pulse News Reader and Evernote that filled the screen perfectly. However, tablet apps on offer remain well behind the iPad, and there remains no easy way to determine if an app in the Google Play store is designed to work on a tablet.

The ASUS Transformer Pad TF300 has an 8-megapixel rear camera that doubles as a 1080p video recorder. We don't see the point of a rear camera on a tablet, but if you do want to snap photos and video with the Transformer Pad, you'll be well serviced. We found autofocus slow at times but images captured possess a fair amount of detail and reasonably good colour reproduction. Of more importance is the front-facing 1.3-megapixel camera, which works well with third-party video apps like Skype and Tango.

The ASUS Transformer Pad TF300 doesn't have 3G connectivity, so its a Wi-Fi-only tablet. ASUS has announced it plans to launch a 3G version of the device in Australia (the TF300TG) "very soon", though the company hasn't yet specified a release date or price. 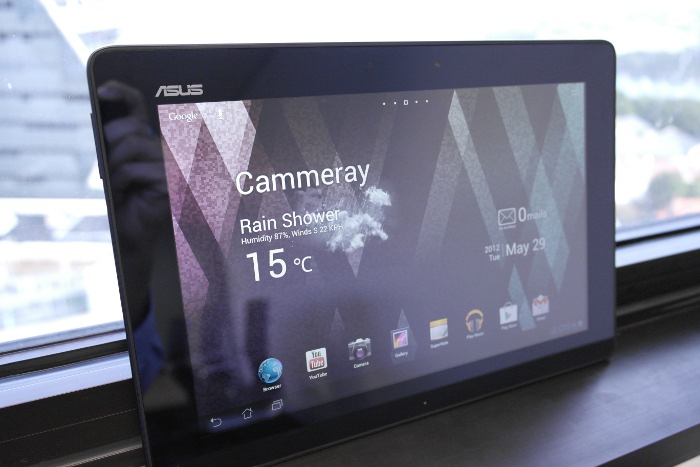 Keep in mind that there are three "power profiles" available use on the Transformer Pad TF300: power saving, balanced, and performance. We ran all our tests in balanced mode, which is the default setting. You should be able to push better battery life out of the tablet using power saving mode, though this limits performance, which is likely to pose an issue with gaming and other CPU intensive apps.

The ASUS Transformer Pad TF300T is available through major Australian retailers including Harvey Norman, JB Hi-Fi and The Good Guys. ASUS sells the 32GB model for $499 without the keyboard dock, or $599 with the docking station included.