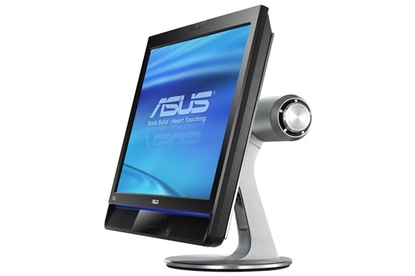 If you're after a multimedia and gaming display that also packs in a reasonably good audio system, the ASUS PG221 may be a suitable choice. While its price tag is quite high and the sound quality isn't stunning, overall it should satisfy many users.

For the gaming and movie enthusiast, ASUS's PG221 offers somewhat of an all-in-one package, combining a good quality display with a webcam and built in speakers. While packaged speakers are becoming more and more popular in monitors these days, ASUS differentiates itself here by offering a subwoofer in addition to the standard tweeters, making this a genuinely viable alternative to third-party speakers.

The quality of the speakers is fairly impressive considering the space they're packed into. The main speakers run along at the base of the display, while the sub is mounted behind as part of the stand. Audiophiles won't find a replacement for their high-end headphones here, but people relying on a basic set of PC speakers will be pleasantly surprised by the rich bass and good detail produced. We noticed some minor distortion, and the sound was a little flat at times, but it did a good job with our film and gaming tests. You connect the monitor via a standard stereo cable and it is recognised immediately.

Of course the quality of the sound is irrelevant if the picture produced is poor, but as usual ASUS comes up with the goods here. We ran a combination of film, game and software tests and the PG221 performed well in most regards.

DisplayMate Video Edition was our first port of call. This software offers a variety of charts and images designed to test the panel at a fundamental level. It rendered the contrast charts excellently, with great separation even at the extreme ends. There was some minor stepping in the intensity ramp tests, but it was barely noticeable and shouldn't prove a problem. Colours were bright and vivid for the most part, although everything did have somewhat of a cool cast. We were able to remedy this to some degree using the calibration options.

In our film tests the great contrast was again extremely obvious, with detail in even the darkest areas coming out clear and sharp. Black levels were very good, and there was nothing in the way of motion blur thanks to the 2ms (grey-to-grey) response time. The colour issue discovered in DisplayMate wasn't as prominent, but it was noticeable on our desktop when changing between films. Our gaming tests showed similar results with the deep blacks, great contrast handling and low response time all combining to make a pleasant gaming experience.

Aesthetically the unit is quite stylish, and manages to look fairly compact considering what it packs in. The slick, gloss black exterior will fit in nicely with a modern PC setup, but keep in mind it does attract its fair share of fingerprints. One irritating design element is the touch sensitive buttons, which are quite fickle, sometimes responding nicely and other times requiring several presses.

There are a variety of calibration options, including brightness, contrast and some manual colour options. They aren't as extensive as we've seen on some monitors, but they allow for a decent level of customisation. This is definitely a good thing, as the image presets leave a little to be desired.

The webcam operates reasonably well. It has a resolution of 1.3 megapixels and is fine for basic Web conferencing or video chatting. It connects to your PC via a USB cable.