The ASUS Padfone Infinity is the third-generation model of the Padfone series. 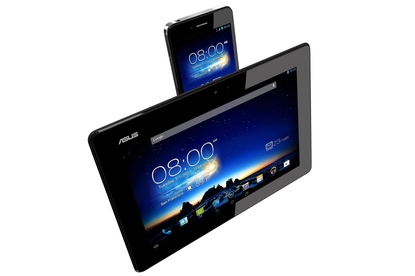 The ASUS Padfone Infinity is the third-generation model of the company's Padfone line of products. It has a full HD display, a 13-megapixel camera and up to 64GB of internal memory.

ASUS seems hell bent on the modular concept of a smartphone that docks into a tablet shell. The company has just unveiled the third-generation model of its Padfone product, the Padfone Infinity. It boasts a full HD display, a 13-megapixel camera and up to 64GB of internal memory.

The Padfone Infinity is the third Padfone product to be released by ASUS. The company started with the original Padfone, then launched the Padfone 2 last year, though it still hasn't officially released that model in Australia.

The Padfone Infinity is an upgraded version of the Padfone 2. The biggest improvement appears to be a 5in, full HD Super IPS+ display with a resolution of 1920x1080, up from a 4.7in, 720p display on the previous model. This gives the screen a pixel density of 441ppi, which is among the highest on the market.

The internals of the phone have also been given a significant boost. The Padfone Infinity is powered by a 1.7GHz quad-core Snapdragon 600 processor and has 2GB of RAM. There's also up to 64GB of internal memory available, though there's no microSD card slot to expand that storage.

The ASUS Padfone Infinity will ship with the latest 4.2 Jelly Bean version of Google's Android operating system. The device will support both 3G and LTE data, so it will work with Australian 4G networks if and when it launches Down Under. Interestingly, the Padfone Infinity uses a nano-SIM rather than a micro-SIM.

ASUS will launch the Padfone Infinity from April in Europe starting from €999. There's been no word yet on an Australian release or pricing, with ASUS Australia saying it is "waiting for the team from head office to inform us of the schedule" Down Under.