ASUS N61Vn notebook has a multi-touch trackpad, a 720p-capable LCD display and an optical drive capable of reading Blu-ray discs. It won’t last long without the power adapter, but this fashion-conscious entertainment notebook provides serious performance.

ASUS’ N61Vn notebook is designed for entertainment, with a 16in LCD screen, plus it has enough power to chew through 3D rendering tasks with ease. It boasts a multi-touch trackpad, but lacks the appeal of other fashion-conscious notebooks from Sony or Apple. Its poor performance in our battery life tests means the N61Vn can’t stray far from a power outlet.

We’re not sure the ASUS N61Vn lives up to the company’s claims of “cutting-edge design”, but it certainly isn’t an unattractive notebook (in our opinion the supercar-branded notebooks takes ASUS' ‘ugliest notebook’ crown). The unusual speaker grille design and the alternating use of matte and gloss finishes on the keyboard area and LCD display make the ASUS N61Vn seem a little over-designed – nonetheless we’re sure it will grab attention.

The 16in LCD screen is an unconventional size, so the laptop is unlikely to fit into snug 15.4in notebook bags and may prove too small for bags suited towards a larger 17in notebook. ASUS claims the screen is HD standard, though its resolution maxes out at 1366x768 pixels, which means it will only play up to 720p content in full detail. Nevertheless, the display quality is good despite some glare from the display's gloss finish.

There’s definitely a touch of Apple-inspired design on the ASUS N61Vn notebook. The keyboard, for instance, features spaced keys in the same style seen on the Macbook Pro and most Sony VAIO notebooks. The comfort of this style is a matter of personal preference (for the record, we like it) but in this instance the keys do feel a little spongier and more resistive than they should. 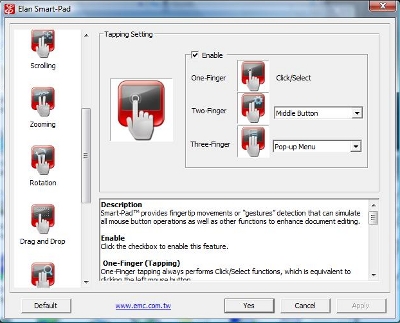 The other Apple-esque inclusion is the multi-touch trackpad, which supports up to three fingers at one time. ASUS provides a huge amount of configuration for the button assignments — going beyond even Apple’s efforts. Using the bundled Elan SmartPad control panel you can assign the right and left buttons to 20 different tasks each, with a similar capability for one, two or three-finger taps. You can even assign a middle-click button. Unfortunately, other multi-touch functions — zooming, scrolling, rotating and even window switching — were not functional on our pre-production review model. Provided ASUS gets these features working in its final shipping version, we are sold on this feature.

We tested the ASUS N61Vn notebook before it went into final production. Still, the notebook was fully decked out with an Intel Core 2 Quad 9000 2GHz CPU and 4GB of DDR3 1066MHz memory. The NVIDIA GT240M graphics has 1GB of dedicated memory and can share a further 1.2GB of system memory.

With this configuration the ASUS N61Vn 16in notebook managed to score 96 points in the WorldBench 6 tests, a slightly disappointing result considering the less powerful HP Pavilion dv7 2022tx managed a similar tally. It also encoded 53min of WAV files into 192Kbps MP3 in 1min 15secs, and rendered an image in Blender 3D in 48 seconds. All three tests showed that while the ASUS N61VN notebook isn’t able to encode or compress files that quickly, it is more than capable when performing 3D rendering and other image manipulation tasks. The 7200rpm 500GB hard drive equipped in our test unit managed 30.72 megabytes per second (MBps) in our transfer test, which is a reasonable score.

The N61VN scored 7244 points in Futuremark’s 3DMark 06 synthetic benchmark which is a fantastic score for an entertainment notebook. However, don’t mistake it for a serious gaming machine; the N61Vn only ran Crysis Warhead at around 15 frames per second in a 1366x768 resolution. With low settings, it will capably play most games but it is best to look elsewhere if you're serious about gaming on a notebook.

N61Vn notebook's performance results did have an impact on its battery life. In our tests the ASUS N61VN notebook managed to play a DVD for 89 minutes with Wi-Fi and Bluetooth switched off. This notebook can be used for short jaunts away from a power source but it won’t be long before it needs to be powered up, and you better not forget the adapters and chargers on your vacations or business trips.

At nearly 2.9kg in weight with the battery installed, the ASUS N61Vn isn’t the most portable notebook around but it is certainly powerful. It’s great for light gaming and watching a Blu-ray movie on the road, but its design has room for refinement.