An affordable 16in ASUS notebook with plenty of speed and a USB 3.0 port 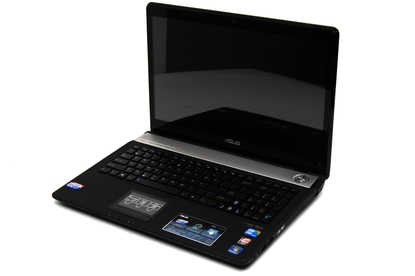 With plenty of CPU speed, memory and hard drive space, the ASUS N61Ja is a great desktop replacement notebook. It even features a USB 3.0 port, which means you'll be able to run USB 3.0-based external hard drives at their maximum speed. We just wish the notebook had a backlit keyboard and a better screen.

The ASUS N61Ja is a 16in notebook with a fast Core i5-430M CPU and a lot of modern features. In fact, it's the first notebook we've seen to sport a USB 3.0 port. It's a hefty laptop that weighs 2.7kg and it's best suited as a desktop replacement. With a little determination, you could take it to class or to the office, however. 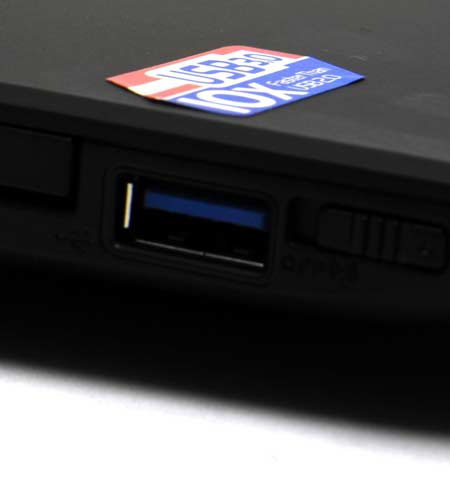 The ASUS N61Ja is the first notebook we've seen to have USB 3.0. You can tell it's faster than the other USB ports because it's blue.

Physically, the ASUS N61Ja is very similar to the Samsung R580. Both are 16in notebooks with very similar dimensions and they have identical keyboards. The layout of ports is different on both units, as is the screen and the look and feel of the chassis. For starters, the ASUS has a matte palm rest instead of a glossy one, and the touchpad is made of a much smoother material. The screen also has edge-to-edge plastic over it, which makes it look slick — there is no protruding bezel. It probably adds a little to the overall weight of the unit. At 2.75kg, the ASUS is 250g heavier than the Samsung. The weight difference is quite noticeable when you carry around the ASUS in a backpack.

Nevertheless, there's nothing wrong with being a little overweight — especially when the insides of the N61Ja are so high class. You have the afore-mentioned Intel Core i5-430M CPU running the show, along with 4GB of DDR3 SDRAM, a 500GB hard drive and an ATI Mobility Radeon HD 5730 graphics adapter. It's a configuration that's ripe for multitasking, and the 2.27GHz speed of the CPU means that the notebook will breeze through most tasks in a reasonably short amount of time.

In the WorldBench 6 test the ASUS N69Ja recorded a score of 110, which is a very fast score for a laptop. It breezed through the office, video encoding, image editing, file compression and multitasking tests. It actually ended up being 8 points faster than the Samsung R580 in this test, even though it has a slightly slower CPU. We chalk it up to the ASUS using the 64-bit version of Windows 7 Home Premium instead of the 32-bit version that the Samsung notebook uses. Furthermore, the ASUS has a slightly faster hard drive; its 5400rpm drive recorded a transfer rate of 29.85 megabytes per second, which is 3MBps faster than the Samsung's drive.

In the Blender 3D and iTunes MP3 encoding tests, which primarily test the CPU, the N69Ja fell in line with our expectations as it recorded scores a few seconds slower than the Samsung R580. The CPU uses Intel's Turbo Boost technology, so it actually runs a little faster than its advertised speed of 2.27GHz; we clocked it at 2.53GHz when using all of its capacity to complete a four-thread render in Blender 3D.

ASUS supplies a nifty little screen gadget that shows you the frequency of your CPU as you are using the laptop.

The ASUS N69Ja can be used for more than productivity tasks, however, as it comes with a very competent ATI Mobility Radeon HD 5730 graphics adapter. It recorded 7830 in 3DMark06, which is around 400 marks more than what the Samsung R580 scored with its GeForce GT 330M graphics adapter. It means that you can use the N69Ja to play a few of the latest games. You probably won't be able to play many games at their full detail settings, but at the native 1366x768 resolution of the screen you should be able to get playable frame rates in many titles.

We wish the screen had a higher native resolution than 1366x768, as the low resolution just makes the screen look small — and at 16in, small it ain't! The screen is far too reflective and requires that you use maximum brightness all the time in order to see things with a modicum of comfort. A matte screen or a less reflective glossy coating would be nice.

It's understandable that a higher resolution panel wasn't used, as it would bump up the price of N61Ja, which currently costs $1299. That's pretty good for a fast computer that not only features the latest in CPU technology, but also the latest in connectivity: USB 3.0. You can use the screen reasonably comfortably when lining up two windows side by side with Windows 7's Aero Snap feature. Some windows will require horizontal scrolling when lined up next to each other, but you can use the gestures supported by the touchpad to quickly and accurately zoom out of Web pages and documents, which will reduce the amount of scrolling you have to do.

The touchpad is large and feels good to use. It's a multitouch pad that can support gestures involving up to three fingers. It will take some time to learn how to perform some of the gestures; we couldn't figure out how to rotate photos, but zooming and flicking back and forth between photos in a folder was a cinch. We like the overall feel of the keyboard, and the number pad comes in handy. We just wish the keyboard was backlit and that the arrow keys weren't so undersized. 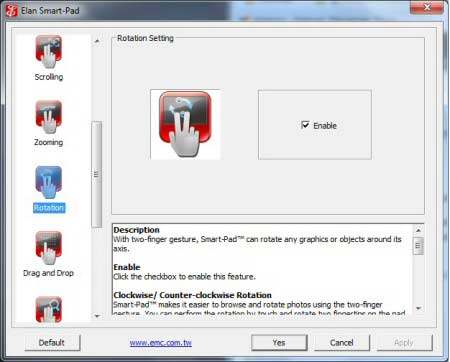 The touchpad utility shows you all the gestures that are supported and how you can perform them.

Above the keyboard are five buttons; four of these can be used to play and pause music and adjust the volume, while the fifth can be used to quickly change power schemes. The N61Ja doesn't have a dual graphics system for power optimisation; the N61Jv, which is two models up from this notebook, uses NVIDIA's Optimus technology and can automatically detect which graphics card needs to be used for the current workload. On the ASUS N61Ja you just have the one ATI graphics adapter.

In our battery test — during which we loop an Xvid video, disable power management, enable the wireless adapter and maximise the screen brightness — the N61Ja lasted 1hr 42min. This is seven minutes more than the Samsung R580 lasted using an NVIDIA GeForce GT 330M graphics adapter. When we switched to the battery-saving mode, we got just over two hours in the same test. Both notebooks use a 6-cell battery; unlike the battery on the Samsung, the ASUS doesn't have a physical indicator on it to let you know at a glance how much charge is left.

ASUS has packed the N61Ja with plenty of utilities, ranging from Control Deck, which allows you to change screen and audio settings among other things, to ASUS Fast Boot, which allows you easily diable applications and services from starting when Windows 7 boots up. You probably won't use all of the utilities that have been installed, but they are worth checking out.

With a good amount of grunt and plenty of features — including four USB 2.0 ports (one which doubles as an eSATA port, and one which can run at USB 3.0 speed), HDMI, VGA, an SD card reader, a DVD burner, an ExpressCard/34 slot, Gigabit Ethernet, 802.11n Wi-Fi and a webcam — the ASUS N61Ja offers plenty of bang for your buck. We just wish it had a less glossy, higher resolution screen and a backlit keyboard.