The ASUS N56V offers good performance, lots of useful features and a great level of user comfort. We enjoyed using it very much and think it's a good unit to consider if you want fast application performance, as well as the ability to run modern games.

It's almost impossible to dislike the ASUS N56VM, which is a third generation Intel-based laptop with plenty of speed for office tasks and even for gaming. Best of all though, it's a comfortable laptop to use, with a soft, responsive keyboard and a surprisingly enjoyable Elan touchpad. The screen isn't glossy, the palm rest is large and feels good, and the laptop's audio quality is above-average compared to a typical notebook.

The N56VM is a 15.6in laptop with a weight of 2.6kg and a full chassis. It has a built-in DVD-RW/Blu-ray drive, four USB 3.0 ports, separate microphone and headphone ports, optical audio output, VGA, HDMI, and Gigabit Ethernet (based on an Atheros AR8161/8165 chip). It's a well balanced laptop that feels well made and it looks stylish. The area above the keyboard has a dot pattern that fades as it moves towards the palm rest, while the ASUS logo on the lid glows white while the laptop is powered on.

We like the keyboard on this model a lot, mainly because its keys are soft and possess good travel and response, but also because it's a backlit keyboard. It provides a wonderful night time typing experience and the intensity of the backlight can be adjusted to one of three levels. What would make it better is if it had a timer that switched off the light during idle times, but it wasn't too much effort to switch it off manually when we knew we wouldn't be using it for a while.

The Elan touchpad occupies an area of 114x71mm on the roomy palm rest, its buttons are concealed beneath the pad (and they worked well), and its surface has a spiral pattern that we thought would be a little annoying to rub against while using it. However, it turned out to be a very smooth pad with decent accuracy and we experienced few problems with it during our test period. The only thing that was frustrating at times was the two-finger scrolling performance; when scrolling a long page, the scroll came to a slow stop rather than an immediate stop when we lifted our fingers. At first it was annoying, but then we got used to it and actually enjoyed the way this worked. Depending on how your hands are placed when you type, the touchpad could get in the way, so you might need to adjust the ASUS Smart Detector settings in the touchpad's driver. 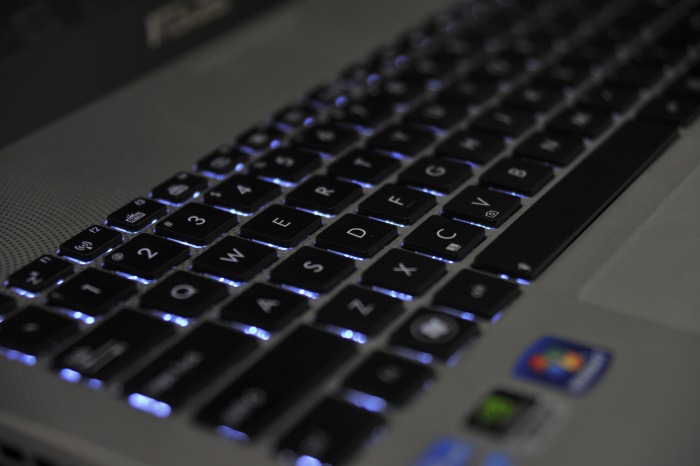 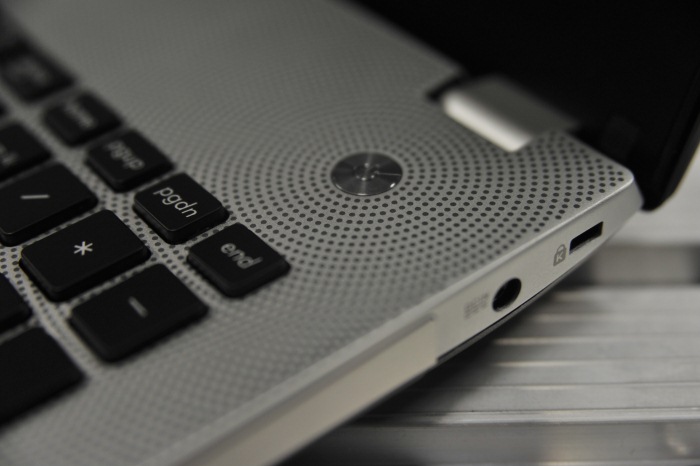 The dot pattern around the power button and speaker area. 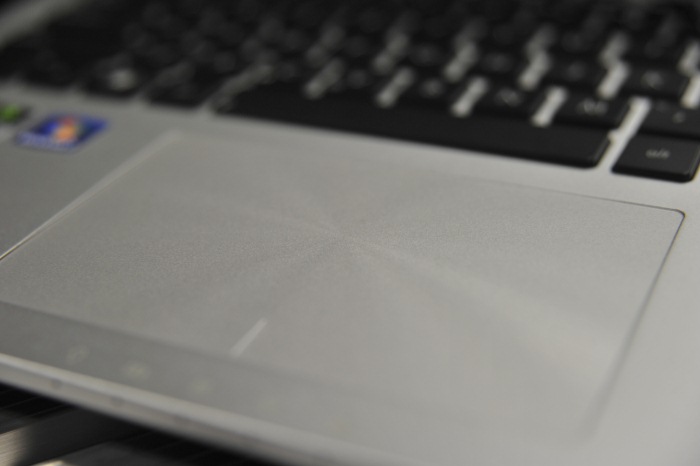 The touchpad is large and has a spiral pattern. It felt good to use.

With a matte screen, the overall image quality does look a little dull, but the major upside is that reflections from room lights won't be much of a problem. The screen itself is easy on the eyes and offers decent viewing angles on the horizontal and vertical axes. We didn't have to adjust the screen much at all when watching videos or viewing Web pages. We're disappointed that it doesn't have a slightly higher resolution; like most 15.6in laptops, this one is also stuck with a 1366x768-resolution panel.

The audio performance on this laptop is enhanced by the addition of a little external sub-woofer, which can be plugged in to the left side of the notebook when you want to experience the best possible sound. We found it enjoyable to listen to music using the laptop's speakers. As long as they weren't at full blast, there was virtually no distortion and the frequency range was acceptable, even for low frequencies. That said, even when it wasn't at full blast, it still filled a decent-sized room with sound quite comfortably. There are equaliser settings to play with if you want to tweak the sound, and ASUS even includes a music making program with some built-in samples so that you can attempt your best DJ Shadow impersonation (we saved our creation as an MP3; it was that good). 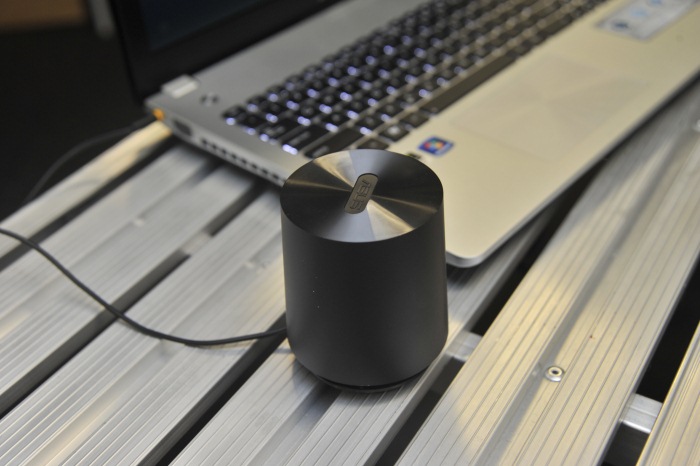 On the inside, the ASUS N56VM features a third-generation Intel Core i7-3610QM CPU, 8GB of DDR3 SDRAM, an NVIDIA GeForce GT 630M graphics adapter and a 5400rpm, 750GB hard drive. It's a good overall configuration, and it put up decent results in our benchmarks. It recorded only 20sec in the Blender 3D rendering test, 45sec in the iTunes MP3 encoding test, and 39min in the AutoGordianKnot DVD-to-Xvid conversion test. All of these results are faster than the other Ivy Bridge-based laptop we've seen so far, Lenovo's ThinkPad Edge E530.

In 3DMark06, the discrete NVIDIA GeForce GT 630M graphics adapter posted a mark of 10756, while in 3DMark11, it posted P1321. Again, both of these marks are faster than what the Lenovo did in these benchmarks using the same graphics adapter and a similar overall configuration. In games such as Battlefield 3, the ASUS recorded between 27 and 30 frames per second and the game was comfortably playable. You could definitely use this notebook for gaming, as long as you aren't too serious about detail levels.

Like many laptops these days, the N56VM also features switching technology so that the Integrated Intel HD 4000 graphics are used when the laptop is running on battery power, or when running applications that don't need the extra 3D processing grunt. The Intel graphics recorded 6793 in 3DMark, so you can see that the NVIDIA part offers a good deal more performance when you want to play games. The fan will kick in when the laptop is under a heavy load, such as when you're gaming, and it's not overly loud. The exhaust is on the left side of the chassis and lots of heat can be felt passing through it; some heat comes up through the keyboard, but we didn't find it to be uncomfortable.

Storage is handled by a single, 5400rpm, 750GB Hitachi hard drive (model HTS547575A9E384). It recorded a read rate of 93.17 megabytes per second (MBps) and a write rate of 89.28MBps in CrystalDiskMark. In our own file transfer tests, it averaged 58.88MBps, which is a fine result for a single drive, and once again that is faster than what the Lenovo posted in the same test. We had no problems with the responsiveness of the ASUS N56VM when launching applications and multitasking. The laptop came out of sleep in just under 3sec, while a cold boot took about 52sec, which is a little longer than we hoped.

A removable, 6-cell, 56 Watt-hour battery is installed in the spine of the laptop and it lasted 3hr 35min in our rundown test, in which we disable power management, enable Wi-Fi, maximise screen brightness and loop an Xvid-encoded video. This is only one minute less than the time recorded by the Lenovo ThinkPad Edge E530, which uses a slightly more powerful battery.

All up, it's a good result for a 15.6in laptop with a Core i7 CPU. You can get more life out of it if you use a sensible power management profile, and ASUS knows this so it changes profiles for you automatically most of the time. Even when we manually selected high performance, the laptop would revert back to a balanced or power saving ASUS Power4Gear profile when the laptop was restarted.

For connecting to local area networks and the Internet, you can use either the Gigabit Ethernet port, or the 802.11n Atheros AR9485 Wi-Fi module. It's only a single-band, one-stream module, which is disappointing, but we didn't have any problems with it. It'll be fine for basic file transfers and online video streaming from 2-10m distances.

There is an SD card slot located at the front of the laptop, but it's placed slightly under the front lip of the panel, which means you might have to lift up the laptop in order to easily access it.

On the left side of the chassis, just above the escape key, you'll find a shortcut button that can be programmed to launch one of your most-used applications. It's a nice touch, and it balances the look of the laptop, too, with the power button being on the opposite side.

All up, the N56VM is a very good laptop. It was most enjoyable to use thanks to its good keyboard, touchpad and matte screen and we found the sound quality to be exceptional, too. It can supply swift performance for office applications, but it can also be used capably as a gaming machine, as long as you aren't used to playing with super-high detail settings. For an asking price of $1399, we think it's well worth it.