Plenty of space, with 1TB of internal storage! 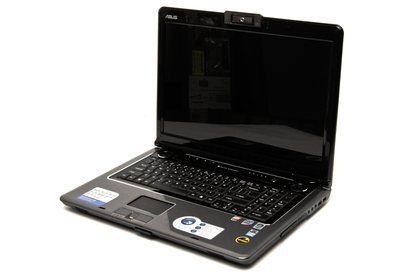 There's a lot to this notebook, and while it works great for the most part, it could still use a little refinement, especially with regards to its video input ports. Overall though, it's a great media centre notebook and it does have tremendous storage capacity.

More than a desktop replacement notebook, the M70SA has all the necessary features to be seriously considered as a media centre for a home theatre setup. Not only does it ship with a Blu-ray player and a hybrid TV tuner, it also features 1TB of internal storage space, which is perfect for recording digital TV shows as well as storing stacks of music and videos.

With a 17in high-definition screen, the M70SA is definitely large and tips the scales at exactly 4kg. Its battery lasts 1hr 31min in a worst-case scenario. You wouldn't want to lug it around with you, and you probably shouldn't — it's better suited to being the centrepiece of your lounge room entertainment.

You can watch Blu-ray and DVD movies either directly on its 1920x1200-resolution screen (which has very good contrast and wide viewing angles, but suffers from reflections) and five-speaker system, or you can use its HDMI port and re-direct its output to your home theatre system or big-screen TV. The HDMI port works well with the installed ATI Radeon Mobility HD3650 graphics adapter, which can scale the video output for a TV, and it's also a powerful-enough graphics card for gaming. You won't be able to play games at the highest resolutions, but it'll do a decent job at low resolutions and without any eye-candy features turned on.

The notebook runs Windows Vista Ultimate, and relies on Windows Media Centre to deliver your videos, photos and music content. Its digital TV tuner picked up all the stations in our area without any problems, and we were able to use the supplied credit card-sized remote control (which can fit in to the unit's empty ExpressCard slot when not in use) to easily change channels and record programs. However, a larger media centre remote would be nice. You can also use the touch-pad's media buttons to control video playback, brightness and volume — these buttons aren't illuminated, however. When watching videos and listening to music, the built-in speakers do a decent job, and the subwoofer helps, but the overall sound is too flat; you should consider hooking it up to external speakers.

Under the hood, the M70SA is a beast: a 2.5GHz Intel Core 2 Duo T9300 CPU runs the show, and it's aided by 4GB of RAM, as well as the aforementioned Radeon graphics card and 1TB of storage. It completed our iTunes test — where we convert 53min of WAV files to 192Kbps MP3s — in 1min 12sec, which is exactly what we were expecting out of this CPU. It'll run typical office applications with ease, and it'll also do a good job for users who want to edit photos and videos. Multitasking will be a breeze.

The 1TB of storage is made up of two 500GB, 5400rpm Hitachi hard drives, which have been partitioned by ASUS to provide four equally-sized logical drives: you get a formatted capacity of 931GB, and you can also add external hard drives via either of the notebook's four USB 2.0 ports or its e-SATA port. Physically, the internal drives aren't located directly next to each other (one near the front and one near the rear), so the heat is well dispersed in the base of the notebook. The notebook's air vent is located at the rear of the notebook and it doesn't make too much noise.

The notebook also has Gigabit Ethernet, 802.11a/b/g/draft-n networking, Bluetooth 2.0, FireWire and an SD memory card slot, but unlike most notebooks, it also has video-in. Using a supplied break-out cable, this port can be used to plug in a Foxtel set-top box, for example. Although we didn't have a Foxtel box with which to test this, we connected a DVD player to see if the Media Centre software could pick up the signal, and it did. (ASUS also couldn't confirm if these ports will work with a Foxtel set-top box.) Unfortunately, no capture software is supplied for these ports.

Elsewhere, there is a 1.3-megapixel webcam, which can be flipped 180 degrees to film activities happening in front of the notebook. There is also a light sensor, which can adjust the brightness of the screen in relation to your environment. Its effect on the screen's brightness was barely noticeable though.