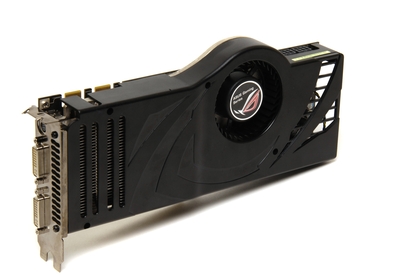 It's the most powerful card on the market and trumps its closest competitors, but it's also the most expensive. If you want the best frame rate possible from a single card though, this is the one to buy.

The massive, stealth-black GeForce 8800 Ultra from ASUS inspires fear in any ATI fan-boy's heart. Though it screams high-performance car it is in fact a graphics card - NVIDIA's current top of the line at that. Released just before ATI's first DirectX 10 graphics card, the GeForce 8800 Ultra trumps its competition and all other cards in the 8800 range, at least when it comes to raw power and performance. It comes at a premium cost though, so start saving your pennies if you're only after the best of the best.

If you're not already familiar with NVIDIA's series 8 range, it's NVIDIA's first graphics processing unit (GPU) to support DirectX 10, the newest application programming interface (API) from Microsoft. Direct X 10 will be the basis for the next generation of PC games, including titles like Crysis, BioShock and Age of Conan. As part of the shift to DirectX 10, NVIDIA's GPU architecture has been given a massive overhaul, although the new unified shader design would better be described as a whole new system than a touch-up.

In this unified design NVIDIA uses stream processors, rather than pixel and vertex shaders. Stream processors do the job of both pixel and vertex shaders, as well as the new geometry shading introduced by DirectX 10, and can also handle physics processing. The stream processors can be dynamically allocated to perform each task as needed by any given rendered scene. This not only creates a more efficient rendering process, but gives game developers more freedom to create models and environments with fewer constraints.

The most interesting of the stream processor's new abilities is geometry shading. A geometry shader will allow GPU-taxing processes, such as dynamic lighting or single-pass environment mapping, to be rendered considerably faster than before. Geometry shading is not a new concept, but much of the processes enabled by geometry shaders were previously rendered in software and done so very slowly. Geometry shading can also produce a limited form of tessellation, where triangles compiling a scene can be broken down into smaller triangles, allowing smoother more details objects.

Unfortunately there are no games built using DirectX 10 from the ground up, so it's difficult to test the performance of this card. However, we put it through a Lost Planet: Extreme Condition benchmark to see how it ran. Lost Planet: Extreme Condition is a DirectX 9 based game that's had some DirectX 10 features added. Using the in-game performance test, the ASUS 8800 Ultra scored an average of 47.5fps (frames per second) at a resolution of 1920x1200. This resolution requires a 24in monitor or larger. At a resolution of 1600x1200, achievable using a 22in monitor, it averaged 51.5fps. Both of these frame rates are below the optimum, but still acceptable and certainly playable. In our DirectX 9 tests, using 3DMark 2006 and FEAR, it scored considerably better.

In 3DMark using the default settings of 1280x1024, with no anti-aliasing (AA) or anisotropic filtering (AF), it scored 11324. This score was barely faster than its rival the Sapphire Radeon HD2900XT, which is considerably cheaper, however the FEAR tests showed a more considerable gap. At a resolution of 1600x1200 using 16xAF and 4xAA the 8800 Ultra scored an average of 90fps, while its ATI competitor scored just 63fps and the XFX GeForce 8800GTX scored 79fps. At 1280x1024 it continued to score well ahead of the pack, averaging 127fps while the Sapphire scored 88fps and the XFX GeForce 8800GTX scored 113fps.

The 8800 Ultra isn't silent by a long shot, but the noise levels never get too intense, at least not by gaming standards. It also maintains a fairly acceptable and regular temperature. The circuit board itself is about 27cm long, so you'll probably need to have some room in your case, or at least be good with cable management and general case organisation (its 28cm from the bracket).

The heatsink is as thick as the GTX and GTS models, so it will cover at least one other PCI or PCI Express slot on the motherboard when installed. The 8800 Ultra weighs around 800grams, so you'll also want to make sure it's screwed in correctly at the bracket, or you'll risk damaging the motherboard. Power is supplied to the board via two PCI Express 6-pin power cables, which both need to be plugged in for it to function properly. The card also offers two DVI ports and an S-Video port.

Although it clearly performs better than anything else currently available on the market, it's also the most expensive, verging on double the cost of an Radeon HD2900XT-based card and a few hundred more than the next GeForce 8800 card, the GTX. At this stage it seems a little unnecessary to buy a card so powerful when there are few games to really test its limits. Still, if you're future proofing your gaming rig and want raw power there's no other choice. The ASUS model also ships with a copy of S.T.A.L.K.E.R, making it just that little bit more valuable.