A powerful ASUS laptop for gaming and more! The ASUS G60J is a worthy desktop replacement notebook in addition to being a potent gaming machine. You can use this laptop for just about anything thanks to its powerful specifications, and its build quality is very good, too.

NOTE: the specific configuration that we have tested will not be available in Australia. The locally available version of the G60J (G60J-JX031X) will have an Intel Core i7 720QM CPU, 4GB of DDR3 memory running at 1333Mhz, one 500GB HDD, a Blu-ray combo drive, a 1GB GeForce GTX260 graphics adapter, and 64-bit Windows 7 Pro for the same $2999 price.

The ASUS G60J is a powerful notebook with an Intel Core i7 Mobile Processor. It wears the Republic of Gamers badge, which means it can run many of the latest games. It has a 16in screen and a powerful graphics card, and it's comfortable to use — even in the dark, thanks to its backlit keyboard. 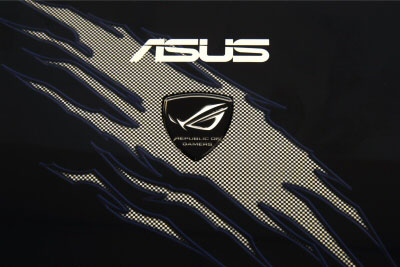 The Republic of Gamers badge is a sure indication of the notebook's ability to run the latest games./

Until you've used a gaming notebook, it's easy to dismiss the entire category as unnecessary. After all, if you wanted to play games why wouldn't you do it on a PC? It would be cheaper, and you'd get a whole lot more processing power. However, it really is convenient to own a notebook that can also be used to play games. For one thing, it will take up less space in your home than a PC, and you can even take on holiday (c'mon, who wouldn't want to fire up Call of Duty: Modern Warfare II while sipping a sangria on a Bali beach) or mosey on down to a friend's place and play some LAN games (if online gaming isn't your thing).

But this laptop doesn't have to just be a dedicated gaming machine; the ASUS G60J is powerful enough to run pretty much any application you throw its way. You can use it for demanding office work, extensive multitasking, and photo and video editing.

Its CPU is an Intel Core i7 Q820 Mobile Processor, which runs at 1.73GHz and has four cores. Those four cores use Hyper-Threading, so what you end up with is a CPU that processes up to eight threads simultaneously. The graphics card is an NVIDIA GeForce GTX 260M with 1GB of DDR3 video RAM, and the system has 4GB of 1066MHz DDR3 RAM. It runs Windows 7 Ultimate 64-bit and it has two 500GB hard drives installed (they are partitioned into four 232GB drives).

In WorldBench 6, the G60J recorded a score of 107, which is not super-fast when compared to the HP Envy 13, for example, which recorded 103 in the same benchmark. However, when you consider that the Envy has an Intel Core 2 Duo L9600 CPU with a speed of 2.13GHz and that the G60J only runs at 1.73GHz, it's an impressive result. Even more impressive is the G60J's performance when it comes to multitasking and running multi-threaded applications. In Blender 3D, which can use all eight of the CPU's virtual cores, it finished our rendering task in 38sec. This is over 50 per cent faster than the HP Envy (83sec). The ASUS G60J's iTunes MP3 encoding time of 1min 1sec is only 13sec faster than the Envy because the program only uses two CPU cores.

The hard drive of the G60J is also very fast; it recorded 35.93 megabytes per second in our transfer tests, which is almost as fast as drvies in many desktop machines we've tested. It uses 7200rpm hard drives, so this performance isn't too surprising. With two hard drives installed, you can perform tough tasks such as video editing and assign the non-system drive to handle all your assets, which makes for a swifter editing experience.

With an NVIDIA GeForce GTX 260M graphics adapter, the G60J is one of the most capable gaming laptops on the market. We like the fact that the native resolution of the G60J is 1366x768 — this is a resolution at which, realistically, most games will run smoothly. This wouldn't be the case if the notebook had a Full HD screen with a 1920x1080 resolution: games would look blocky because to run smoothly their graphics would have to be scaled down. Even 1366x768 isn't optimal for all games, however.

One of the more demanding games we tried, Crysis: Warhead, recorded a score of 18 frames per second (fps) when running at 1366x768 (without anti-aliasing), which means the game will run slowly when the action picks up. It's one game in which you will have to reduce the resolution. At 1024x768 (without anti-aliasing) it recorded 36fps, which is a much smoother result. At this resolution the game will look stretched on the G60J's screen, but you can play in windowed mode if that annoys you.

In 3DMark06, the notebook scored 11,441, which is better than what most entertainment notebooks and mid-range PCs score in this benchmark. The ASUS N61V, for example, only achieved a score of 7244. In Far Cry2, the G60J recorded 50fps at 1366x768, without anti-aliasing, which translates into smooth game play. The notebook ran car racing games at an equally swift pace; Need For Speed: Shift recorded 40-60fps (depending on the amount of carnage on the track) at a resolution of 1366x768, with high image detail and 2x anti-aliasing. You definitely won't get any lag in this game, no matter how frantic the action gets.

While you play games, the graphics card's fan will kick in to keep it cool. It will pump air out of the vent on the left edge. The palm rest on the left side of the notebook will get slightly warm, but it is unlikely to be annoying even after long sessions playing first person shooters. You'll be able to play in the dark, as the keyboard has backlighting that illuminates the keys so that you can see what you're pressing. The keyboard feels reasonably solid, although it does bounce slightly. The keys are 15mm wide and 4mm apart in a 'chiclet' style. There aren't any programmable keys for games, nor are there any media controls. 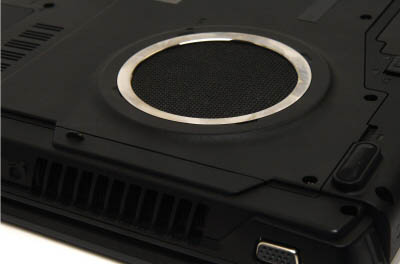 That's no subwoofer! The G60J has a large heat sink and fan combination that's used to extract all the heat generated by the graphics card and CPU.

There are plenty of ports along the edges of the G60J, as well as a DVD burner — you'd hardly miss your desktop PC if this became your primary computer. You get four USB 2.0 ports, HDMI, FireWire, eSATA, D-Sub (VGA), digital audio output, Gigabit Ethernet, an SD card slot and an ExpressCard/54 slot. The speaker system is better than the ones used by most notebooks; you'll be able to get by without plugging in an external set of speakers or gaming headphones. The screen has a built-in webcam, and it carries antennas for the notebook's built-in 802.11n wireless networking module (an Intel WiFi Link 1000). Unfortunately, it is not a dual-band wireless networking module, so if you've splurged on a 5GHz wireless network for your home, this notebook won't be able to take advantage of it.

Since this is a notebook designed to appeal to gamers and power users, it's odd that ASUS has included its Express Gate quick power-up utility (based on Splashtop technology). This lets you get online quickly without loading Windows. It's better suited to netbooks or other entry-level notebooks. Furthermore, the notebook ships with a power management utility called Power4Gear Hybrid that allows you to change its speed. While this utility might come in handy if you want the notebook to run quietly (it runs quietly anyway unless you are playing a game) or want to get the most out of the G60J's battery life, it's pretty much useless for such a powerful notebook.

The 6-cell battery lasted a paltry 49min in our battery test, in which we disable power management, switch on the wireless radio and turn up the screen brightness then loop a DVD. Even with a conservative power management plan and Windows 7's automatic screen dimming, you are going to get just over an hour worth of running time.

It's not the type of notebook you can use outdoors or on the run; not just because of its short battery life, but also because it has a glossy screen that will reflect light and be hard to view outdoors. At around 3.4kg, it is also quite heavy.

With a retail price of $2999, the ASUS G60J is not terribly expensive for a powerful gaming notebook. We think it's well-built, and it has almost every feature on our 'want' list save for dual-band wireless networking. We like it not only as a gaming system, but also as a desktop replacement. We don't really see the point of including Express Gate and Power4Gear on such a powerful notebook, but you know ASUS — the more features the better!