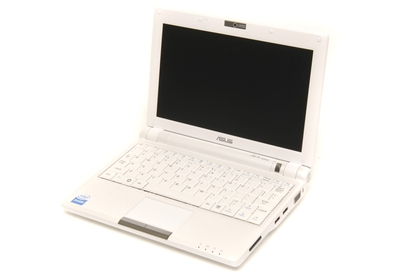 Even if you've never used Linux before, the Linux version of the Eee PC 900 is worth considering. It's more expensive than the Windows XP version, but it does have a larger internal storage capacity, and we feel that it's easier to use.

While it's physically identical to the Eee PC 900 (Windows XP version), this Linux version of the Eee PC 900 has a larger internal storage capacity and is therefore more expensive. Who would have thought that a Linux-based notebook would ever be more expensive than a Windows XP-based notebook? Not only that, the Linux interface that ASUS has employed is clear and well-laid out; in fact, it's actually easier to use than the Windows XP version, but it does feel a little slower overall.

It's the tabbed interface that makes the Linux version so easy to use (it runs the Xandros distribution), as it keeps all of the notebook's different functions in groups. The Internet tab, for example, has the e-mail, Web browser, chat and networking shortcuts, among others, while the Work tab gives quick access to the installed OpenOffice applications. The Learn tab has maths, science, paint and English programs, and the Play tab provides quick access to photo, music and video folders, as well as games.

We didn't have any problems getting on the Internet with the Linux version — it recognised our wireless network and connected to it at 54Mbps using WPA encryption (it also supports WEP). We were able to browse our Windows network without any problems, although we weren't able to stream video comfortably. Instead, the video had to be copied to the Eee PC first, at a rate of around 1MBps, before it would play. But this is a minor quibble and all the networking functions we tried (including network printing) worked well enough.

For watching video, the Eee PC 900 isn't too bad. With dimensions that are similar to a portable DVD player (22.5cm wide and 17cm deep), it's very easy to carry, and its 8.9in screen has relatively good contrast and brightness. Its viewable angles are also wide and it doesn't suffer from noticeable motion blur. However, while playing XviD-encoded videos, we did notice some tearing in the picture. It also struggled to play some WMV files. The Windows XP version was much better viewing videos overall.

Nevertheless, the 18.1GB of available space on the Linux version is plenty for pre-loading a few movies and TV shows to take on the road with you, and the notebook's built-in speakers are so good, you can even watch videos and listen to music without resorting to headphones. Its 4400mAh battery lasted 2hr 10min when looping a video, with the screen brightness all the way up; this is a little short of the Windows XP version, which lasted 2hr 32min in the same test.

Entertainment aside, the Eee PC 900 is an even better tool for education than the original (Eee PC 701 4G), and that's because of the larger screen (which has a 1024x600 native resolution), slightly bigger dimensions and higher storage and memory capacities. The Linux version actually feels a little slower while browsing files and playing with its network settings, but its applications load quickly and they run very well. Unless you're hoping to roll out the Eee PC in a Windows-only environment, the Linux version is well-worth considering. It also boots and shuts down much faster than the Windows version.

Because it's small, it's not very easy to type on. Typing long documents will be tiring. You do get used to the cramped keyboard after a while, however. It has the same touchpad as the Windows XP version, too, which recognises gestures, but unlike the Windows version, the one on the Linux version didn't 'stick' as often. Like the Windows version, the unit got warm while it was crunching data, but not so warm that it would get uncomfortable while using it on your lap.

For connectivity, there are three USB 2.0 ports, headphone and microphone ports, a D-Sub port, a 10/100 Ethernet port and an SD memory slot. A 1.3-megapixel webcam is built-in to the top of the screen, and it does a good job of capturing video, even in low-light conditions. The only thing it could use is an Express Card slot, but there isn't any space for it in the chassis.

Despite the few problems we faced while playing video, we think the Linux version of the Eee PC 900 is still worth considering. Not only because it has a larger internal storage capacity, but also because its interface is nice and easy to use.