No, really, what colour is that lid? 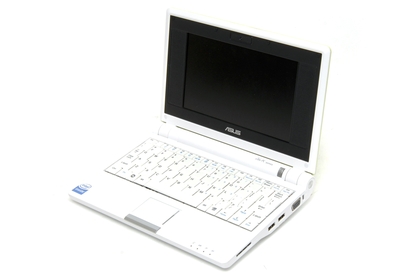 It has been out for a while now, but the original Eee PC is still great value and one of the best super-portable laptops on the market.

If you have less than $480 to spend on a laptop, the obvious choice for you is the ASUS Eee PC 4G. It's pretty much the same version as the Eee PC 701 4G, and is less powerful than its siblings — Eee PC 900 (Linux version) and Eee PC 900 (Windows XP version) — but it's still a useful word processing, Internet, and even video playing, machine. We're re-reviewing it briefly because it has come down in price and because we just had to put up some photos of the pastel-like green lid — it's more of a creamy yellow colour.

It's powered by an Intel Celeron CPU, has 512MB of RAM and its solid-state drive is only 4GB. However, you can still store a couple of videos, a decent library of tunes, as well as some photos, and still have space left over to save your homework or office work. Additionally, you can double your storage space through the unit's SD card slot, and, of course, you can also access files on USB-based storage devices. So the small drive shouldn't be too much of a problem.

Despite having only 512MB of RAM, this unit performed better than the 900 version that we saw a couple of months ago, especially when it came to viewing videos, and also battery life. It also felt a little bit more responsive. It runs a Xandros version of Linux that is extremely easy to use — even easier than Windows — and it has everything you should need: you get OpenOffice, links to online applications such as Google Docs, learning applications such as Math, as well as a media player and multimedia management software. Best of all, the unit boots up in about 27sec, and shuts down in about 8sec.

Videos played back smoothly on this model, with barely any tearing and no audio synchronisation problems, and the moving pictures looked good on the 7in widescreen monitor. The screen is flanked by speakers on either side that are loud enough to fill a normal-sized room; you can also plug in a pair of headphones.

When we first got our hands on this unit, we thought it was the 4G Surf version, as that's what the label said. But of course, the 4G Surf is not for sale in Australia, and in any case, our model had a webcam; the 4G Surf doesn't. The webcam, the lack of any moving parts, the decent screen and performance for everyday applications are what set the Eee PC apart from most inexpensive laptops, and the Eee PC 4G is definitely suitable for kids, students, frequent travellers, and pretty much anyone who doesn't want to spend too much on a laptop. Be sure to read the original review of the 701 4G, as well as our reviews of the 900 units, which we linked to earlier in this review, so you can quickly decide which is the best version for you.