More Eee for your money 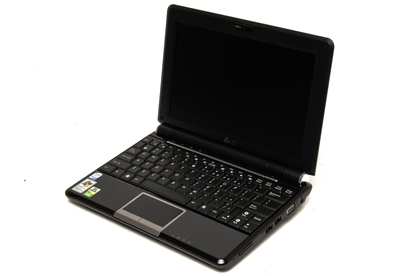 The 1000H is the best Eee PC yet. It's got a larger screen and a larger keyboard than its predecessors, it's faster and it's also got a much larger storage capacity. It's perfect for on-the-go types who want something light and functional to work on.

ASUS is the company responsible for starting the sub-$1000 ultraportable notebook craze — 'netbooks', as they've been dubbed — but the company is not resting on its laurels. Already we've seen follow-ups to the original Eee PC 701 4G (Lush green), in the form of the Eee PC 900 (Windows XP version) and Eee PC 901 models, which offer better screens, and faster processing and connectivity than the original model. Now we also have the 1000H to look forward to, which can be considered the big brother to these models.

This 1000H isn't a Linux unit (although there is a Linux version); instead it runs Windows XP. It doesn't have a solid-state drive (SSD), either. It relies on a conventional 80GB hard drive, so it makes more noise and runs a little hotter than a model with an SSD would. However, this drive gives the laptop more zip than previous models. It clocked 17 megabytes per second in our transfer tests, which is about 7.5MBps faster than the Eee PC 901’s SSD.

The large and fast drive also makes the 1000H an ideal portable multimedia unit, as you can store almost as many movies and music files on it as you can on a high-end iPod. And that's very much a key aspect of this Eee PC; it's more than a tool for getting online and creating documents, it's also a vehicle for being entertained. Its size still makes it the perfect gizmo for travellers who want a small laptop on which to record their adventures and dump their photos, and students will appreciate it for its storage capacity, low price and relatively comfortable keyboard (compared to the other Eee PC models, that is).

It has a 10in screen with a native resolution of 1024x600, and the larger screen means it also has a larger base (it's 26.7cm wide and about 18cm deep), so its keyboard is much easier to type on than the Eee PC 901, for example. It's still a little cramped, but it's easier to get used to than the 901's keyboard. Each letter key is about 12mm on each side. Its touchpad is large and a little sticky, and it supports two-fingered scrolling. However, it's very slow to scroll pages in Internet Explorer, even when you jack up its speed in the control panel.

Physically, the 1000H resembles the 901, the only difference being that it's slightly longer. Both units have the same depth and thickness and the same array of ports along the edges. You get a D-Sub port, three USB 2.0 ports, 10/100 Ethernet and audio ports, and an SD memory card slot. A couple of speakers underneath the unit do a good job of reproducing music and movie audio, and there is also a 1.3-megapixel webcam installed.

As is the case with the previous Eee PC models, the 1000H is very well rounded in terms of features. The 901 has slightly faster networking than the 1000H thanks to its Gigabit Ethernet port. However, both have Bluetooth and 802.11n wireless networking modules. The 1000H connected to our Linksys WRT160N at a slower speed than we would have liked (65Mbps), but of course the connection speed will vary depending on the router and the environment.

A panel underneath the 1000H provides easy access to the single memory slot and the hard drive, which means both of these components can be easily upgraded.

On the inside, the 1000H is powered by a 1.6GHz Intel Atom CPU and 1GB of RAM. It's suitable for Web browsing and creating office documents, but it's no good for media encoding, so don't pick it up with intention of creating many MP3 files or compressing videos. For example, in our iTunes test it took the unit 13min to encode 53min worth of WAV files to 192Kbps MP3s. It takes a standard Intel Core 2 Duo-based laptop between one and two minutes to complete this task. But it's not something the Eee PC has been designed to do, so we’re thankful it does it at all.

The Atom CPU is Hyper-Threaded, so you can run two applications simultaneously without noticing much sluggishness, and this is good for listening to music while you browse the Web or write up a report, for example. You can also use it for basic photo editing, although its small screen will be hard to work on, and the touchpad will make it hard to navigate around a 10-megapixel photo. In fact, the screen’s vertical resolution of 600 lines is a little small for some applications' dialogue boxes — the 'OK' and 'Cancel' buttons can get hidden beneath the bottom edge of the screen.

While on the road, the unit’s 6-cell 6600mAh battery is fit for a marathon. It lasted four hours in our endurance test, in which we loop videos while the screen’s brightness is at 100 per cent. This is over an hour less than what the Eee PC 901 achieved, but it's still a fine result.