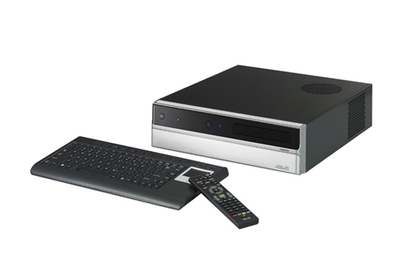 The ASUS Digital Home D22 is a great all around media centre. It offers dual HD tuners, with a HDMI output, meaning it will be useful for a great many years to come.

Sporting a relatively slim design, a dual core processor, two HD TV tuners and 250GB of storage, the ASUS Digital Home D22 is a fairly competent media centre PC. It performed quite well in our tests and should satisfy the average consumer who is after a multipurpose device for media recording and playback. For storage, there is a 250GB 7200RPM hard drive, along with a DVD-RW Dual Layer writer.

Running a 1.86GHz Intel Core 2 Duo E6300 CPU with 1GB of DDR2 RAM, the D22's specifications are mid-range compared to many desktop PCs on the market. While it isn't suitable for incredibly demanding graphics or imaging work, media centre PCs don't require exceptionally high specifications. In our testing we found that this machine is more than adequate for audio, video and television needs.

It scored 106 in World Bench 5, which is a fairly strong score and shows that basic office and desktop tasks are not a problem for the D22. Similarly, it posted a time of two minutes and eight seconds in our encoding test, which converts 53 minutes of WAV files into 192Kbps MP3s. This time is consistent with other, similar CPUs, and shows that basic media oriented tasks will also pose no problems for the system.

We also ran the included Nvidia GeForce 7600GS graphics card through a few tests, as it is rare to see a media centre with a GPU (Graphics Processing Unit) of any real power. It did quite well, scoring 20222 in 3DMark 2001 and 2148 in 3DMark 2006. These scores show that both older and newer titles will run quite well on the system, and while truly demanding titles such as F.E.A.R will struggle, the D22 is more than adequate for the occasional bout of Doom 3 or Counterstrike, should you feel the urge.

It comes pre-installed with Windows Media Centre Edition 2005, rather than the newer Windows Vista (although ASUS are offering a free upgrade), and everything operates as expected. There is a built-in EPG (Electronic Program Guide) that allows you to schedule and record programs on a once-off, daily or weekly basis.

We tested the two High Definition digital tuners, and found them to work well, connecting quickly and maintaining strong signal strength. Dual tuners offer several advantages over a single tuner system, including the ability to watch one channel while recording another, or even recording two channels simultaneously. Keep in mind that even though the tuners support both digital and analogue broadcast signals, you cannot record analogue TV while watching digital, or vice versa as both tuners must be running the same signal type.

With a sleek black case and a silver front panel, the D22 looks quite nice for a media centre PC. With a fairly minimalist layout, main facade should mesh well with your home entertainment setup, The front panel flips down to reveal a card reader and both E-SATA, USB 2.0 and microphone and headphone jacks. The rear of the unit houses a more robust set of connections, including more USB 2.0 ports, Co-axial and Optical audio, Component and DVI video and most notably, HDMI.

The HDMI support is one of the D22's key selling points and is a big inclusion for audio visual connoisseurs. Offering superior picture and audio quality through a single cable, it not only improves the viewing experience but decreases cable clutter as well.

The case is extremely well ventilated, with several grates running along the top, back and side of the unit. It kept cool during our testing and should be suitable for storage in a warm, confined home entertainment cabinet without suffering from overheating. Similarly, we found it to be extremely quiet, with the fans exhibiting no audible noise even when the system was running at full load.

All in all, we found this to be a good, all purpose media centre PC. It has some gaming capabilities, an attractive and relatively slim design and more than enough power to adequately perform digital media tasks. More importantly its HDMI output means it will give you the highest quality video and audio possible, and will be compatible with future devices for some time to come.