A mid-range, enthusiast-level ASUS graphics card that punches above its weight 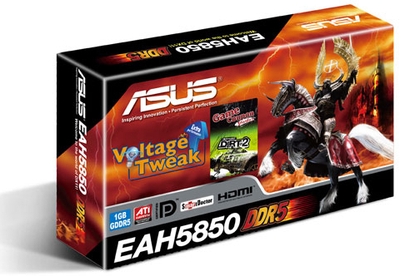 The Asus ATI Radeon HD 5850 1GB (EAH5850/G/2DIS/1GD5) is a mid-range graphics card aimed at gamers and 3D enthusiasts. It can be viewed as a more affordable alternative to ATI’s former top dog; the ATI Radeon HD 5870. The latter has since been superseded by the absurdly powerful (and absurdly expensive) ATI Radeon HD 5970 — which knocks the HD 5850 even further down the ladder.

While it’s no longer a force to be reckoned with, the HD 5850 1GB is still a very capable performer. With an RRP of $539, the Asus ATI Radeon HD 5850 1GB isn’t dirt-cheap, but it provides plenty of bang for your buck nonetheless. It also comes bundled with a free game: the DX11-capable Colin McRae: Dirt 2 (you will need to download the game digitally using the provided voucher). Let’s take a look at what makes the card tick.

While this obviously has an effect on performance, the ATI Radeon HD 5850 remains very impressive for the asking price — it will satisfy gamers of all creeds, with the exception of the ultra-hardcore. It’s also smaller, cooler and more energy-efficient than its bigger brother, bolstering its appeal even further.

The Asus ATI Radeon HD 5850 1GB (EAH5850/G/2DIS/1GD5) requires two six-pin power connectors to run. While noticeably smaller than the ATI Radeon HD 5870, it’s still a bit of a beast, measuring 258x94x36mm. It should fit inside your PC case without any hassle, though setting up a multi-card CrossFire configuration could be a tight squeeze.

As mentioned, the ATI Radeon HD 5850 is a pretty cool performer despite a distinct lack of fancy fins or grills (its design is basically indistinguishable from ATI’s reference board). When under load, the Asus ATI Radeon HD 5850 1GB (EAH5850/G/2DIS/1GD5) peaked at 68 degrees Celsius. By contrast, ATI’s previous generation of cards were known to creep past 90 degrees. (And the less said about Nvidia’s new graphics cards, the better.) If you’d prefer not to deck out your PC with an extensive cooling solution, the Radeon HD 5850 is a good choice.

Alongside two DVI-I connectors and an HDMI port, the Asus ATI Radeon HD 5850 1GB (EAH5850/G/2DIS/1GD5) also comes with DisplayPort. This allows you to connect up to three monitors simultaneously using one card. Apparently, there are gamers out there who like to arrange their monitors into a cockpit configuration while playing flight sims and racing games. Being nerds, we’re intrigued enough by this to give it a try.

Rounding out the package are some handy applications, including Asus’ Gamer OSD, which allows you to record footage of your gaming sessions and adjust clock speeds on the fly. Also included is Asus SmartDoctor: an advanced overclocking tool that can be used to raise the voltage of the core. The app also comes with plenty of safety tools, fan speed options and alarms to ensure you don’t burn out your GPU.

We ran our benchmarks on a Vista 64-bit machine running an Intel Core i7 965, 6GB of DDR3 RAM and a Western Digital VelociRaptor (WD3000GLFS) hard drive, installed in an Antec Skeleton case. We then compared the results to other graphics cards we’ve reviewed in the same testbed. Unless otherwise stated, we have used the DirectX 10 version of each game, with maximum settings enabled:

As you can see, the Asus ATI Radeon HD 5850 1GB (EAH5850/G/2DIS/1GD5) punches well above its weight when it comes to real-world benchmarks. It smashed ATI’s Radeon HD 5870 reference card in all of our gaming tests, and also managed to best the Manli GTX295. It even managed to compete neck-to-neck with the ATI Radeon HD 5970 in some benchmarks.