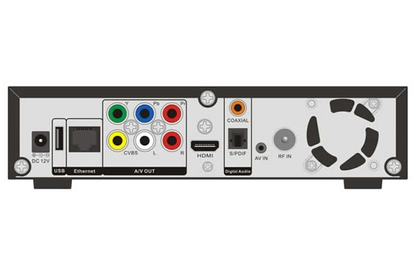 The Astone Media Gear AP-360T is a fuss-free media streamer. It's not flawless, but if you're looking for an easy-to-use streamer with a reasonably powerful feature set this is one to consider.

The Astone Media Gear AP-360T is a media streamer with an inbuilt digital television tuner and a versatile feature set. It's not perfect — it has a bland interface and there is no integrated Wi-Fi — but if you're looking for a relatively cheap media streamer that can handle most everyday tasks then it's a viable option.

Unlike the Compro T1000W media streamer, the Astone Media Gear AP-360T is not a stylish product: it's a squat plastic box. The front panel has activity lights for power and hard drive read and recording status, as well as a USB host port and a USB 'B' port for connecting a computer directly to transfer media.

We hooked the Astone Media Gear AP-360T up to our test television, a Panasonic TH-P50G15A plasma, using the 1080p-capable HDMI port. For anyone with an older TV there's also component and composite video. We would have also liked to see VGA for connecting a PC monitor. Audio is handled by analog stereo RCA and coaxial and optical digital outputs. The remote control is relatively simple but we did initially have some problems with the layout — the EPG button is hidden down the bottom, for example. This doesn't present a significant issue though; we got used to it after a short while.

The Astone Media Gear AP-360T has a blue-and-white interface with occasional splashes of yellow. It's a little generic for our liking, and there are no icons to add a bit of life, but the interface is easy to use. The menus are easy to understand and logically laid out, and there is reasonable scope for adjusting video, audio and playback options.

The internal TV tuner of the Astone Media Gear AP-360T isn't brilliant, but it's quick and competent. We found the full complement of Sydney channels in a two-minute search; that's quite slow but thankfully switching between channels is a breeze and generally takes less than a second. The quality of the tuner is roughly equal with other PVRs we've tested; there is reasonable detail visible in high definition broadcasts.

Apart from watching and recording television, the main purpose of the Astone Media Gear AP-360T is to stream audio and video over a network and play files from the internal hard drive. Our review unit came with a 1TB Western Digital WD10EVDS drive installed.

The AP-360T streams media via its 10/100Mbps Ethernet connection without any stuttering and with minimal buffering. There's an optional 802.11n wireless dongle (the player doesn't have Wi-Fi as standard).

Codec support is extensive, ranging from garden-variety MPEG and DivX to more powerful H.264, VC-1 and Real Video HD containers. There is also FLV support — if you have a stockpile of downloaded YouTube videos this may be of interest. The ability to move subtitles around the screen will be useful for anyone with an extensive collection of films in different languages.

Astone's Media Gear AP-360T media streamer is a competent product. It doesn't do anything exceptional to make it stand out from the crowd, but at this price it's a good choice.