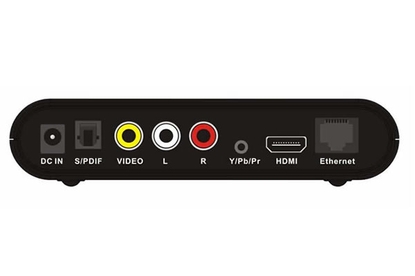 At first glance, the Astone Media Gear 1080p AP-100 looks like a bedside clock with its flimsy construction and bland design. However, it's actually a media player with good format support, a reasonable price and the ability to play Full HD media.

There are two USB ports at the front; unfortunately they are placed extremely close together. This makes it virtually impossible to plug two USB drives into the unit simultaneously; to use both ports, one would need to be plugged in via extension cable.

On the back of the unit there are composite connections, an HDMI port, an Ethernet port, a mini connection for component video and an S/PDIF socket for digital audio output. This is an impressive array of connections for a player at this price point. (The Western Digital WD TV — which also retails for $199 — lacks Ethernet, for example.)

One of the best things about the Astone AP-100 media player is that it supports a wide range of video codecs including MPEG-1, DivX and FLV. Playback is seamless and smooth; we didn't notice any frames skipping in videos. A few times while watching high-definition video files audio was out of sync with the video, but a quick re-buffer of the file and you’re back to enjoying Full HD media. When watching videos, users have the option to switch between resolutions, including 480p, 576p, 720p and 1080p. Users also have the option to view photographs, and eight transition effects can be selected for slideshows.

The media player lets you create playlists of videos, music and photos; however it does not have any internal memory. In order to access media files an external storage device will need to be plugged into the unit via the USB connection.

The media player can connect to an existing network and stream music, photos and videos directly from a connected computer. Unfortunately there are about 12 pages in the manual dedicated to connecting the device to a network, which includes going through settings on a computer’s Control Panel and Local Area Connection Panel, which may deter less tech-savvy users. An optional USB dongle connects the device to Wi-Fi networks.