A must-have for iPhone owners 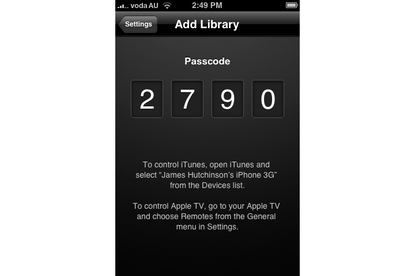 Apple’s Remote application is a brilliant piece of software that manages to tie the company’s bevy of wireless and music server technologies into the iPhone. It’s easy to use and has a great interface, though Apple’s application restrictions mean that you can’t use the iPhone in any other way while Remote is running.

Remote is one of the best applications available from the App Store at the moment and there's a good reason for it — it was made by Apple. We're not suggesting that the software engineers at 1 Infinite Loop are able to program better than anyone else. However, although Remote mostly plays by the same rules as third-party apps, months of work behind closed doors and unrivalled access to key Apple technologies have probably helped Remote become a must-have for any Apple product fiend.

Remote is just that: a remote. Once downloaded onto the iPhone from the App Store, users can control any AppleTV or iTunes program that the handset can access over a wireless network. The application requires simply that the user input a unique four digit code into the iTunes program or AppleTV of choice. Then, they can control music, movies, podcasts and other media.

Once connected to a library, Remote will automatically retrieve a list of all media categorised by metadata tags, so that users can choose by artist or album, or search for their favourite song.

AppleTV control is also quite comprehensive, with Remote showing not only local media available on the device, but also any media that is streamed to it. The response to the Remote application is near-instantaneous over Wi-Fi; the only speed bumps we encountered were with streaming large movies to an AppleTV.

What we like best about the Remote application is the way it integrates with existing Apple technologies. Despite the shortcomings of many of Apple's media products, AirTunes remains unrivalled. It gives users the ability to easily stream music from any iTunes installation to an AppleTV or Airport Express. Remote fits brilliantly into this setup.

In an Apple-centred home, users can control music throughout the whole house from their iPhone. They can stream the same music simultaneously across the house or divide it into specific zones with different music as desired. Put simply, the iPhone becomes a media hub for a home's movies and music — the equivalent of the Squeezebox Duet remote for an Apple house.

Oddly enough, Remote suffers the same 'no background applications' limitation as third-party iPhone applications. Once you hit the home button, Remote will lose its connection to the library. On reopening the application, it will automatically reload the library.

Remote is a mature and well-constructed application that fits nicely into an Apple-centred home. Still, it's a first-party product from a development team that had a leg-up in terms of development time and access to corporate technologies. It may still be some time before we can see the same quality achieved by third parties.