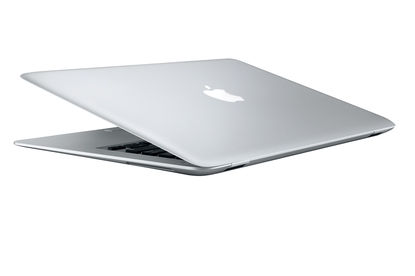 The MacBook Air is a superbly crafted notebook, but this niche product isn't for everyone. Its lack of optical drive, FireWire and Ethernet ports deem it inadequate for power or everyday users. Regardless, it functions well as a secondary device for frequent travellers, or those who require basic, hassle-free computing.

Claiming to be the "world's thinnest notebook", the Apple MacBook Air is quite simply an incredible piece of industrial design. At just 19.4mm thick at its highest point, the Air boasts an anodised aluminium casing, a full-sized backlit keyboard and a trackpad that uses gesture-based input. The Air is not for everyone, but frequent travellers and those after an ultraportable notebook oozing with style will definitely be interested.

The first thing you'll notice about the MacBook Air is...well, it's extremely thin. Perhaps more of a surprise is just how sturdy the unit feels, despite its size. Many ultraportable notebooks often feel flimsy and delicate, but the MacBook Air's smooth, anodised aluminium casing and build quality is an excellent feature. You'll have no worries transporting it around all day like it's intended to be and it certainly feels as though it will take its fair share of bumps and bruises.

Under the hood, the Air is a typical ultraportable. It's important to note that it's not going to appeal to power users or gamers and nor should it. It's been designed for basic, portable computing and it does these jobs well. The Air is powered by a 1.6GHz Intel Core 2 Duo CPU with an 800MHz front side bus and a 4MB L2 cache. There is also 2GB of DDR2 RAM and a rather small capacity 80GB hard disk drive, in addition to 802.11b/g/n Wi-Fi and Bluetooth 2.1. Alternatively, for a hefty bill of $4338, you can upgrade to a 1.8GHz CPU and a shock resistant 64GB solid state hard drive (SSD). Overall, performance is average; the Air isn't going to blow you away in terms of speed, but for basic tasks like word processing, Internet browsing and document editing, it does a relatively sound job.

Despite the design, Apple has still managed to squeeze in a 13.3in display and a full sized, backlit keyboard, relatively unheard of in the ultraportable space. The 13.3in widescreen is the same size as the regular MacBook display and has a maximum resolution of 1280x800. The glossy display is excellent – it's bright and clear and does a fine job displaying both rich multimedia and crisp text. Above the display is an iSight camera sandwiched in between two laser cut grills, the first a light sensor and the second a microphone.

The full-size keyboard is identical to the rest of the MacBook range, but the Air adds backlit key illumination. This is extremely useful at night or in low-light conditions. A built-in ambient light sensor automatically adjusts both the keyboard and display brightness and we found this worked very well.

A new feature on the MacBook Air that's not available on the rest of the MacBook range is the multi-touch trackpad. Operating similar to the iPhone and iPod Touch displays, the trackpad responds to finger gestures such as swipes, pinches and taps. Just like the iPod Touch, you can swipe your finger across the trackpad to scroll through your documents, pinch to enlarge text and rotate to adjust your photos. It's fairly responsive as it's able to distinguish between one, two or three fingers and the extra large size of the trackpad certainly helps.

As with many ultraportables, there is usually a compromise in achieving such a small design. The MacBook Air doesn't come with an optical drive (a $99 option), has just a single USB port and lacks FireWire, an Ethernet port and expansion slot. Apple puts this down to the fact that the MacBook Air essentially functions as a wireless device, so there is no need for these features – whether you agree or disagree with this notion depends entirely on your needs. A USB-to-Ethernet adapter is a $39 extra, while the included "micro-DVI" port means you'll have to use the included dongles (one VGA and one DVI) to hook up the Air to a projector or television.

Although the concealed, flip out flap that holds the ports is a lovely look, its design is somewhat frustrating – the cramped position of the USB port means it can't hold most 3G USB modems and some larger USB keys – you'll need a USB hub or extension cable for these.

As it doesn't have an optical drive, the MacBook Air instead boasts the Remote Disc feature, where it can essentially borrow a drive from a nearby computer (MAC or PC) – provided they are both on the same wireless network. Simply install the included software onto any other computer then load the disc into the drive, select Remote Disk on the MacBook Air and you can then access the disc wirelessly. You can't watch a DVD movie or rip CDs with iTunes but you can install most software (with the exception of Windows using Boot Camp) and access files.

Another drawback to the design of the MacBook Air is the battery – its sealed and non-user replaceable, so those who regularly rely on multiple batteries are out of luck. With battery life only rated at up to five hours this may well be a deal breaker for many. Heat is also an issue – after little over an hour of use, the MacBook Air becomes quite warm.