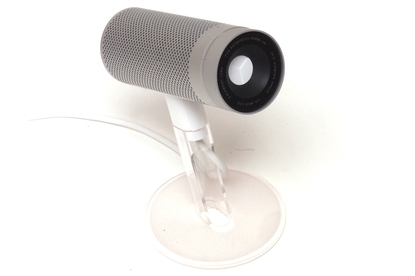 If you’re a Mac user, the iSight is the only webcam you should be considering. It’s expensive, but in terms of quality and ease-of-use it’s a clear winner.

The Apple iSight is a stylish Macintosh based FireWire webcam which delivers outstanding video quality and includes a noise suppression microphone - but be prepared to pay for Apples styling.

As with most Apple hardware products, the emphasis is on unique design and the iSight is certainly eye-catching. Cased in a cylinder shaped aluminum-alloy exterior, the iSight wins points for looks, and weighs only 63 grams. Furthermore, it offers three different mounting options including a plastic stand for eMac's and other desktop computers, a mount for iBooks and PowerBooks and a magnetic mount for LCD monitors, including Apple's cinema displays.

Once mounted, the iSight is adjustable both at about 20 degrees in each direction. We found that when it was attached to the top of our iMac G5, the angle of video capture is increased and overall, the iSight feels more like a television than a video camera.

Once we connected to iSight to our computer, we were thoroughly impressed with its results. Particularly important to note was the image quality which is as close to full colour reproduction as we have seen on any webcam. To top it all off, we found the image was crisp and clear at all times. The iSight also features autofocus (which ranges from as close as 50mm), while an on-board processor automatically adjusts sharpness, colour, white balance, focus and exposure. The autofocus feature was excellent when it focused on a stationary item and even followed moving objects fairly well.

But the autofocus isn't perfect and sometimes focused on the wrong area, particularly when a second person or object entered the viewing area. Additionally, the image settings such as colour, brightness and contrast are not adjustable. While the automatic functions do a fairly good job, we would have liked to have the freedom of adjusting the settings ourselves.

The Apple iSight includes a built in noise-suppressing microphone and it delivered clear audio during our tests. Apple claims the microphone takes in the sound and then determines which sounds are essential to the conversation with an algorithm that filters out excessive noise. While it sounds fairly technical, we can tell you that it does work as well as claimed.

On the negative side, the iSight requires iChat AV to operate all of its functions and this is not included in the package - in fact there is no included software at all. Furthermore, the iSight is built entirely for use on Macintosh based systems so Windows users will have to look elsewhere.