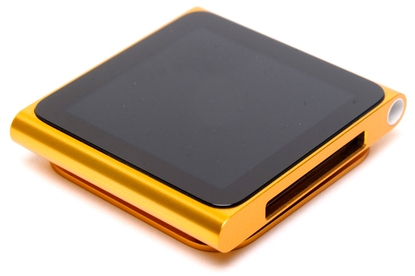 Apple has made a (very) minor upgrade to the iPod nano with the addition of some new watch faces in the Clock app, and extra features for the Nike+ fitness app. A cynic would say the new model doesn't offer any advantages for existing iPod owners, but the slightly lower price tag and extra features mean that we continue to think of the iPod nano as an excellent and simple portable music player.

Apple’s iPod nano has had as tumultuous a life as the company’s iMac, changing its form factor regularly since its 2005 introduction. The latest iPod nano is the sixth iteration of the miniature music player (only the iPod shuffle is smaller) — over the years it has gained and lost a larger screen and camera, traded the venerable click wheel for a touchscreen iOS-like interface. We’re taking a look at the most recent software update unveiled at Apple’s Let’s Talk iPhone event at the start of this month.

The latest iPod nano 1.2 update adds integrated accelerometer support, making the Nike+ fitness software work seamlessly without requiring a third-party add-on. Combined with a watch band, this feature makes the nano a reasonable tool for tracking casual workouts. It’s not as accurate or as feature-heavy as using a specialised fitness tracker like the Garmin Forerunner 610 or the combination of iPhone and RunKeeper, but if you’re looking to keep tabs on the distance you’ve walked or how long you’ve run, it does an acceptable job. It gets more accurate with time as the inbuilt accelerometer calibrates itself to your gait, and after a few tries we found it almost as accurate as our iPhone app for tracking a roughly 6km run. It stores stats for your workouts for later access, including data on time, steps, distance and calories burnt — a nice little value-add.

Trading on the Apple iPod nano’s surprising success as a multipurpose watch — several third-party watch bands were released for the square nano a short time after its release, and Apple now stocks a wide range in its online store — Apple’s latest nano software update increases the number of watch faces available to 16, ranging from ‘formal’ traditional faces (we’re not sure you’d ever wear the iPod nano as a formal watch, though) to digital and novelty ones. We liked the nixie clock most on our orange-with-black-wristband nano, but from our examination it looks like there’s a watch face that will at least suit every colour of iPod. We’re not sold on using an iPod nano as a watch, but this update is good for anyone who would. 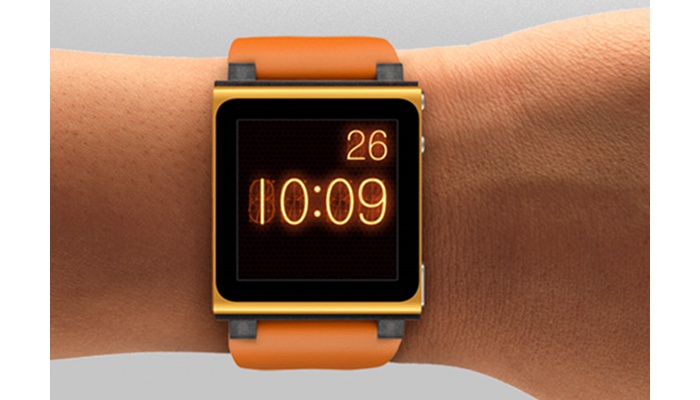 The ‘nixie’ clock face we used on our orange iPod nano.

The interface is a little friendlier and more customisable than before, with the option to switch Home Screen icons (the inbuilt ‘apps’) to either large or small sizes and also to remove icons from view entirely. Users move through open apps by swiping from left to right, which is intuitive but imperfect — when unlocking the device the clock is shown by default, so as many as half a dozen swipes are needed to return to the Home Screen and open a new icon. Similarly, accidentally swipe the wrong part of the radio screen and you’ve just changed the station. Any iPod touch or iPhone user will be instantly familiar with the system though, and new users should have little trouble picking up its eccentricities.

As you’d expect, all the other features — y’know, like music playback, photos, the inbuilt radio, podcasts and the rest — are still easily accessible and haven’t changed. It’s also good to see accessibility features like VoiceOver and black-on-white. What we appreciate more is a drop of around $50 in the price of each nano in Apple’s line-up — the 8GB is $149 and the 16GB we tested is $169, and given the small price difference we’d choose the 16GB every time.

Since the price of the iPod nano has dropped slightly since the last model upgrade and a few new features have made it easier to use (and more useful), we have no problems giving the iPod nano our continuing recommendation as a simple multi-purpose MP3 and music player.