Despite antenna issues, Apple's iPhone 4 is definitely the best iPhone yet. Its superb design, outstanding display and excellent camera make it an ideal upgrade for owners of older Apple handsets and enticing for non-iPhone owners. Many competing smartphones can do more, but none of them do it in a manner that's as slick or polished as the iPhone 4.

Apple's fourth-generation iPhone has finally arrived in Australia. Despite the criticism Apple has faced over its antenna design, the iPhone 4 has been well received down under. The phone possesses the best display we've seen on a smartphone and boasts a superbly constructed body that is head and shoulders above its competitors.

Apple products are renowned being stylish and the iPhone 4 is no exception. When Apple released the iPhone 3GS it upgraded the handset's internal components but retained the design of the iPhone 3G. The iPhone 4 has a completely different look and feel. Gone are the sleek curves and well rounded edges; they've been replaced by sharp lines, a completely flat glass back and a stainless steel band that doubles as the phone's antenna — all in a body that’s slimmer than the 3G and 3GS. The iPhone 4 has a much more industrial and robust-feeling body than its predecessors. It feels less natural to hold, however, and the sharp edges can dig into your fingers.

Apple's attention to detail is particularly evident in the external controls — the volume keys are now two separate buttons that emit a solid clicking sound when pressed, while the silent switch and screen lock keys also match the body. 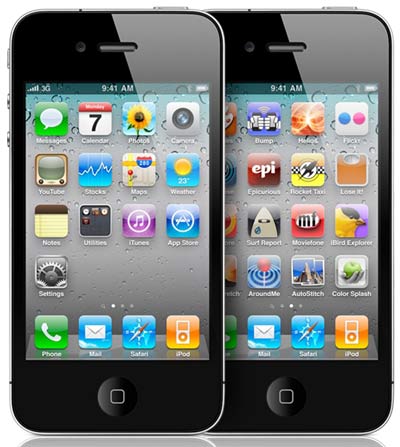 A big change from the iPhone 3G and 3GS is the rear of the handset; the iPhone 4 has a glass back that is definitely aesthetically appealing but picks up fingerprints and can crack if the handset is dropped. We recommend using a protective case with the iPhone 4.

Another major change is the display. Dubbed a "retina display" by Apple, the company claims your eyes are unable to distinguish individual pixels on the screen due to the 326-pixels-per-inch density. It's the best display of any smartphone we've seen to date. It is particularly excellent at displaying text, with no visible aberrations even when zoomed in. This makes it excellent at displaying Web pages and books, though we still feel an e-ink screen (such as the one used on Amazon's Kindle e-Book reader) is superior for lengthy reading. The iPhone 4 display also possesses outstanding viewing angles from all directions, performs admirably in direct sunlight and is ideal for watching video content. The glossy screen does attract fingerprints and is hard to keep clean, but this is the case with most touchscreen smartphones. 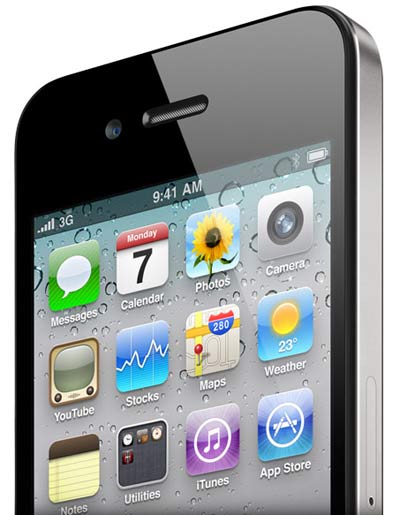 The iPhone 4 benefits from an upgraded camera that also doubles as an HD video recorder. The sensor has been bumped from 3 megapixels on the iPhone 3GS to 5 megapixels on the iPhone 4, and an LED flash is finally included. The phone includes a second, front-mounted VGA camera that enables video calling (called FaceTime) and the capture of self-portrait photos. A button in the camera application quickly switches between the cameras, while a small switch changes from image to video capture. Apple claims the iPhone 4 camera uses a backside illumination sensor that provides improved performance in low-light conditions. Combined with a surprisingly competent LED flash, the iPhone 4 is definitely one of the best camera phones we've tested when it comes to snapping pics in dim lighting. It still won't replace a dedicated point-and-shoot camera, however. Like photos taken with most mobile phone cameras, images do suffer from noise, although they remain surprisingly well lit. A real plus is the camera's speed — the application loads almost instantly and there is minimal shutter lag when taking photos. 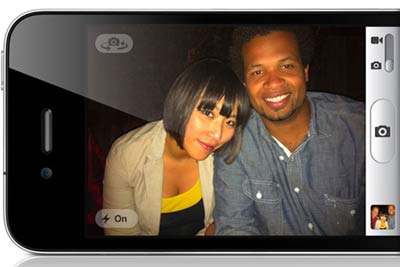 The iPhone 4 records 720p HD video with its rear camera and can also record standard-definition video using the front camera. The LED flash can be set to auto, off or on during video recording and you can perform basic crops on videos without the need to download further software. You can also focus using the tap-to-focus method (the same used when taking still photos). It was hard to eliminate shaking from footage, even when holding the iPhone 4 as still as possible. A real advantage of video recording on the iPhone 4 is that you can download Apple's iMovie app ($5.99), which enables you edit videos shot on the phone by adding themes, transitions, music and photos.

FaceTime is Apple's fancy name for video calling; it's a free service that’s currently only usable over Wi-Fi. The big benefit of FaceTime compared to other video calling apps is its integration: to make a FaceTime call you simply select the contact you wish to call and then press the FaceTime button. The service requires no log-in or account details, but currently only works with other iPhone 4 users. The quality of calls is surprisingly good but this will ultimately depend on your Wi-Fi connection. Apple says FaceTime is an open standard and therefore other manufacturers can integrate the feature into their devices. 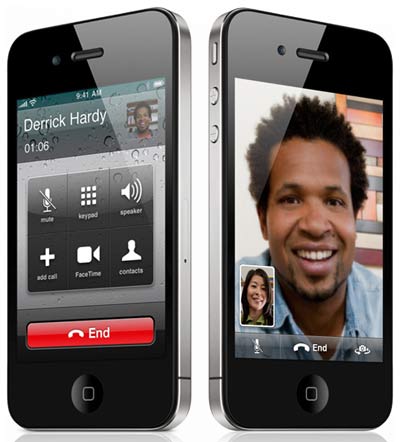 The iPhone 4 runs Apple's iOS4 operating system, and if you've used an older iPhone that runs this version of the OS the experience will be familiar. It’s a case of more of the same for Apple, with the familiar swipeable home screen enhanced by folders, and the consistent Apple UI look and feel extending across all of the standard applications. For users coming from the iPhone 3G, the performance increase is immediately noticeable — the iPhone 4 is a very zippy smartphone, opening applications almost instantly and suffering from no evident lag. Users coming from the iPhone 3GS won't see as many benefits; the iPhone 4 is moderately faster than the 3GS in some instances, but the difference isn’t that noticeable.

For users new to the iPhone platform, you can expect a device that’s easy to pick up and use, a well-populated App Store, and excellent multimedia capabilities. The iPhone's iPod integration ensures it remains the best music smartphone on the market, while mobile Web browsing is fast and efficient, aided by excellent multitouch technology (such as pinching the screen to zoom in and out of Web pages). Though the streamlined iPhone experience has won many fans, Apple's closed platform means the iPhone 4 doesn't offer the same flexibility as other smartphones, particularly those that run Google's Android operating system. It comes down to personal preference, but if you are a compuslive device tweaker, then the iPhone may not be for you. The iPhone has an inferior notification system to Android, and it doesn't let you customise and display live widgets on your home screen. By the same token, the iPhone interface and overall user experience are far more polished than anything currently on offer from Android phones. 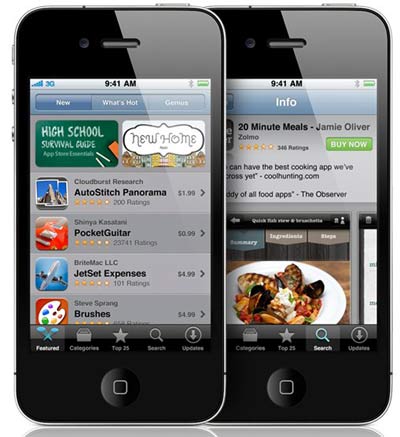 The iPhone 4 has been released in Australia despite well-documented antenna issues. When held tightly in the left hand a small gap separating the steel band can be bridged and the iPhone 4's signal can drop. Many users in the US have reported dropped calls and slower data speeds as a result. Apple's solution is to provide free cases to all iPhone 4 owners — an offer that also applies to Australian users.

Does the antenna issue also affect Australian iPhone 4s? In short, yes. For example, on the Telstra network in an area with a full strength signal, holding the iPhone 4 tightly in the "death grip" dropped the signal from five bars to four after 20 seconds, and then to three bars after an extra 10 seconds. Results varied whenever we tried the "death grip" — in areas of good reception it often only dropped one bar, in poorer areas (two or three bars normally) it frequently dropped to one bar. The extent at which you will be affected by the antenna issue will depend mostly on what network you are with; we didn't experience any dropped calls and data speeds remained fairly consistent. The "death grip" is feels like quite an unnatural way to hold the phone, though left-handed users may disagree.

It's clear the iPhone 4 does have a signal accentuation problem when held in a certain way; despite what Apple may want us to believe, this is a design flaw. If you do use a case for your phone then it won't be an issue. The antenna situation is disappointing, but most users won't find it to be a major problem.

If you're a current iPhone user, you have are most likely heavily invested in the Apple iOS ecosystem — you sync your contacts, music and videos with iTunes, and you've probably downloaded plenty of free and non-free apps. If you're happy with the way your current iPhone operates and you like Apple's user interface, then the iPhone 4 is an excellent upgrade. If you're not a current iPhone owner but are looking to buy a smartphone, the choice is more difficult. The iPhone's slick user experience is both one of its best and one of its worst features — it's polished but it lacks the flexibility of competing devices, particularly Google Android smartphones like the excellent HTC Desire. We recommend trying both devices before you buy. The iPhone's outstanding design and brilliant display combined with an excellent app ecosystem may tip the balance in its favour.