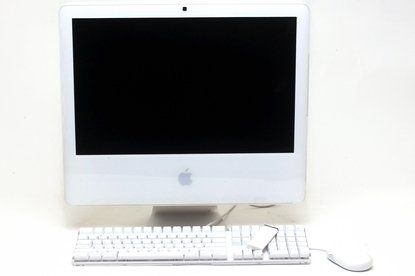 An excellent computer for either home or business use, unless you require excessive performance or add-ons, the iMac is a highly recommended and capable machine.

Apple has improved its range of iMac computers by adding in-built iSight capabilities, extra RAM, wireless networking and Bluetooth as standard features - all this in a case that houses a stunning 20-inch widescreen display.

The all-new iMac retains the basic form of its predecessor, with the only changes being the inputs lined up horizontally rather than vertically, and a slight curve at the back. The most notable improvement is Apple's decision to double the RAM from 256MB to 512MB. The sleek, white iMac is welcome news for those who have little desk space and its attractive style will certainly appeal to most people. Minimal cables, an integrated silver stand and an almost invisible DVD drive only further enhance the G5's functionality. Furthermore, the ease-of-setup on the iMac system is truly admirable. Simply unpack the box, plug in the power, keyboard and mouse and that's it - you're ready to go.

All-in-one systems will always have expandability issues and the iMac is no different, as only the RAM can be upgraded. The new G5 contains a single slot for DDR2 memory, which is located behind a door at the bottom of the screen. The slot can accept 512MB, 1GB or 2GB of RAM with the iMac now supporting a maximum of 2.5GB RAM in total. While it's no supercomputer, the upgrades only serve to enhance an already excellent package and are more than enough for the home user. Our review unit boasted a 2.1GhHz PowerPC G5 processor with a 250GB hard drive, a slot-loading DVD SuperDrive and an ATI Radeon X600 XT graphics processor.

The iMac G5 ships with Apples latest operating system, Mac OS X Tiger as well as other bundled software. One of the new and most anticipated software additions is Front Row, an intuitive and user friendly application which allows you to easily control your multimedia files, including photos, videos, DVDs and music.

Included on the G5 is a wireless Apple Remote, which contains six buttons to navigate through your media collection. The remote is stuck onto to the right-hand side of the iMac using a small magnet built into the G5's case and though the remote is quite small, it felt comfortable our hands. Employing a similar control system to the iPod shuffle, users simply press the menu button to begin and the screen will descend into the background to reveal the Front Row menu.

The Front Row software is a welcome addition to the iMac, but it is far from perfect. Firstly, the music menu allows you to shuffle songs, but only those in your library, so there is no way to shuffle by artist or album. Using the photos menu to share images with family and friends is a worthwhile feature, but Front Row doesn't integrate with some iPhoto slideshow settings such as picture and transition effects. Finally, fast forwarding through movies or videos was a frustrating process as holding down the forward button is simply too slow. We would have liked an option to fast forward videos in increments or at different speeds.

The inbuilt iSight video camera and microphone are housed above the screen at the top of the casing. Unlike the stand alone iSight, the inbuilt edition can't be turned off or closed, nor can it be rotated or moved, so you'll have to be in front of the computer to take photos. The iSight works in tandem with a new piece of software called Photo Booth, which as the name states, is a program to take still shots using the iSight camera. Photo Booth doesn't break any new ground, but users will surely appreciate its integration with iChat AV and iPhoto. Photo Booth allows users to select from 18 effects to add to their images, including Sepia, Black and White, Comic Book and X-Ray.

The iMac is fairly well equipped in the connectivity stakes and features Bluetooth 2.0, AirPort Extreme wireless networking (802.11g) and an Ethernet port. The rear casing houses two Firewire 400 ports, three USB 2.0 ports, an optical digital audio output and audio line in. Conveniently, there are two USB 1.1 ports on the included Apple keyboard which can be used to plug in the mouse and other such peripherals, freeing up a USB port on the back of the computer. The iMac now ships standard with Apple's Mighty Mouse, which is a relief to those who were frustrated by Apples insistence of a one button version. .