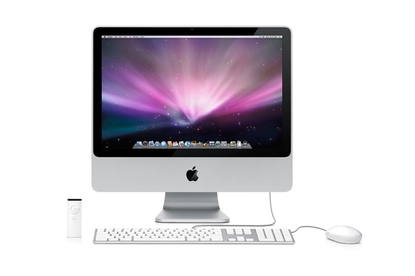 Apple shows that the melding of hardware and software makes for a very compelling computer. Sleek and cool-running, the latest Apple iMac is arguably the best one-stop PC you'll find, at home running Windows or its native Mac OS X.

Apple has updated its iMac line, keeping the metal-framed design from last year but upgrading internals such as processors and hard drives.

The first Apple iMac, launched in 1998, had a 233MHz processor which might seem risibly slow today — the current line-up starts at more than 10 times that speed. Or indeed twenty-times, if you figure the two processors of the Intel Core 2 Duo CPU, the latest 'Penryn' version of which runs cooler and faster than ever before.

We tested the 24in Apple iMac with 2.8GHz CPU, the second-to-top model, featuring a 24in expanse of glossy screen framed by a bezel of satin silver metal. All ports are discreetly hidden behind, and with the new low profile keyboard even the QWERTY interface seem to take up less space than ever.

Overall finish is staggeringly good. We could find no fault with the fit and finish of the entire Apple iMac package.

Already loaded is Apple's OS X, a mature and stable operating system based on Unix, now up to version 10.5 ('Leopard'). But for the sake of testing the Apple iMac, we used Apple's Boot Camp program to partition the drive and install Windows Vista as a second boot volume.

Benchmarked with WorldBench 6 Beta 2, the Apple iMac acheived a score of 101, respectable enough for a one-box PC that puts class and silent style above sheer number crunching. If you do put it in the living room you can rest easy that the whirr of cooling fans won't be disturbing your peace.

Top spec gaming options are somewhat limited by the choice of ATI graphics card, although we did manage to coax 16 frames per second when running the daunting Crysis test at High Quality, 1024x768. Switched to its lowest rendering settings, Crysis ran at a much more useful 70fps.

Back in Leopard, we have the iLife applications for website, photo and video editing, and iWork can be added for ￡55 to handle all MS-compatible word processing, spreadsheet and presentation needs. With Apple trading on high-quality systems extolling ease-of-use, an Apple iMac remains the discerning choice for anyone who needs a dependable desktop at work or