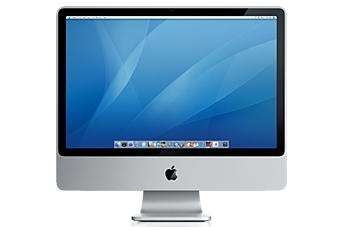 As appealing as the new iMac is, with the Leopard operating system coming this month, I'd recommend holding off. If you do, you'll get the new OS preinstalled.

The 24in iMac is the big boy of Apple's all-in-one desktop line. Despite a new design and upgraded specs, it constitutes a modest update. But this striking system will surely make you look twice.

The PC World Test Centre used Apple Boot Camp 1.4 to load Windows Vista Home Premium onto the iMac. On our WorldBench 6 Beta 2 test suite, the unit turned in a score of 82; that's about 20 per cent behind the average power desktop PC score of 103, but still swift. (This model's high price dictates that we match it against power systems.)

As for looks, this iteration of the iMac dispenses with the kludgy plastic chassis of the earlier iMac line in favour of a sleek anodised aluminium one. Image quality on the 1920x1200-pixel-resolution, glossy glass-covered display is significantly better than before as well, thanks to superior contrast and sharpness.

Like its predecessor, this 24in iMac comes with a FireWire 800 port for fast data transfers between the computer and devices that use that interface, such as external hard drives.