Apple's latest iMacs are noticeably refined compared to their predecessors, though they aren't significantly different. Both 21.5in models are quite powerful and their 1080p LED-backlit displays are certainly vibrant.

Apple's refreshed iMac desktop computer is cheaper but more powerful than its predecessor, and it features a more vibrant display. If you're still a Windows user or have an older Mac, the latest iMac is certainly tempting. However, we weren't impressed by the new Magic Mouse, which is bundled with the iMac.

Little has changed in the iMac's design since its last refresh; it still has the same shiny aluminium and glossy black design. However the display now has LED backlighting, a 16:9 aspect ratio and a native resolution of 1920x1080 pixels. The new display is noticeably vibrant, but the glossy finish is quite distracting in well-lit rooms. Don't expect to view your latest Blu-ray discs in all their Full HD glory either; the iMac's optical drive can only read and burn CDs and DVDs.

On iMac's back there are four USB 2.0 ports and FireWire 800, Gigabit Ethernet, and headphone/microphone ports. You can connect a MacBook or MacBook Pro to the iMac through a Mini DisplayPort and use the display as a secondary monitor for your notebook. There is also an integrated SD card slot so you can easily get photos off your digital camera. Wireless connectivity includes integrated 802.11n Wi-Fi and Bluetooth 2.1.

Apple bundles its wireless aluminium keyboard and new Magic Mouse with the iMac 21.5in desktop. The keyboard lacks a numeric keypad — a deterrent for number crunchers — but it is easy to type with. It uses the same isolated key design found on Apple's notebooks and HP's copycat Envy 13 notebook.

The Magic Mouse is sleek but uncomfortable.

The Magic Mouse is curved and low, so it looks sleek, but it can be uncomfortable to use at first. Like previous Apple mice, the Magic Mouse doesn't have visible buttons, but you can left- or right-click by tapping the top corners. Like the touchpad on Apple's MacBook notebooks and the screen of the iPhone, its surface can be used for finger gestures that control actions such as zooming and scrolling. Unfortunately, the gestures aren't customisable and there are not as many available as on there are on MacBook Pro's multi-touch trackpad. The Magic Mouse’s metal bottom prevents smooth movement and the lack of a middle click (or equivalent finger gesture) severely impairs this mouse's usefulness. We'd stick with a bog-standard, three-button mouse for now. 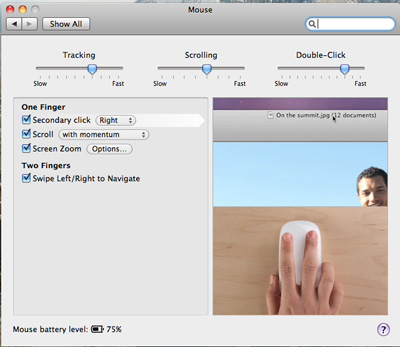 There are only four preset multi-touch gestures for the Magic Mouse.

Both 21.5in Apple iMac models are equipped with a 3.06GHz Intel Core 2 Duo processor and 4GB of DDR3 memory. Our review unit — the entry-level model — boasted a 500GB hard drive and the same NVIDIA GeForce 9400M graphics found in lower-end MacBook and MacBook Pro notebooks. This graphics adapter will suffice for standard desktop applications but won't be of much use when attempting to play games. For an extra $400, the second 21.5in iMac configuration offers ATI Radeon HD 4670 graphics with 256MB dedicated memory and a 1TB hard drive.

Using Geekbench testing software, the iMac yielded a score of 4295 points. This is slightly higher than the 24in iMac with similar specs that we tested earlier this year. Using iTunes, the iMac took just 37.1 seconds to encode 53min of WAV files into 192Kbps MP3; again, a slightly faster result despite using the same processor.

As with all of its computers, Apple bundles Mac OS X 10.6 Snow Leopard. You also get a copy of iLife 09, which includes iMovie, Garage Band and iPhoto software. Apple's productivity suite, iWork 09, isn't included.