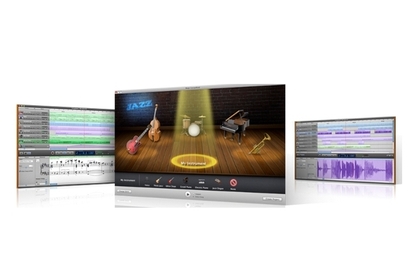 Magic GarageBand is the flashiest, but certainly not the richest new feature in GarageBand '08. Multi-take recording, arrangements, expanded effects, and automation make this version a more capable tool for musicians. While we found little kinks in some of these features, overall they're quite useful. Though not specifically intended for podcasters, those producing podcasts benefit from such new GarageBand features as enhanced and expanded effects and automation.

With the release of GarageBand 3.0 (the version included in iLife '06), iLife's music sketchpad application concentrated most of its efforts at incorporating podcasting capabilities. With the release of GarageBand '08, Apple shifts its music-creation tool's focus back to musicians. Most of the program's major new features - Magic GarageBand, multi-take recording, arrangements, broader automation capabilities, and Visual EQ - nicely augment the music-making process.

During his recent demonstration of GarageBand, Steve Jobs spent the bulk of his time showing off Magic GarageBand, a different, template-driven view of the program that places a five-piece virtual band at your disposal.

To direct that band to play, you select one of nine styles - blues, rock, jazz, country, reggae, funk, Latin, roots rock and slow blues - choose to listen to a musical snippet or the entire tune, and click the Play button. The sounds of a very polished band then emerge from your Mac.

If you click on the Audition button, you can then select one of the instruments - bass, guitar, drums, keyboard and lead instrument - and choose a different instrument to play that instrumental part (horns or violin for the lead instrument, for example).

Doing so causes not only the sound of the instrument to change, but also the part it plays. You can then export the tune to the standard GarageBand view, where you can further edit it.

Musicians seeking a professional back-up band will find Magic GarageBand's repertoire too limited. Although it plays variations of nine musical styles, you're still stuck with just those nine tunes, and musicians looking for greater variety will quickly grow tired of the repetition.

But musicians competent enough to grow tired of Magic GarageBand probably aren't its audience. Rather, it acts as a template - one from which you can view its tunes, snippets or parts in the standard GarageBand interface - allowing non-musicians to get more out of the program and, hopefully, become intrigued enough by the program's other "magic" powers to explore further.

Those musicians who've previously enjoyed GarageBand as a musical sketchpad and rehearsal tool will find more to like in the current version. Apple has introduced multi-take recording, a feature that lets you loop-record multiple takes, as you might do when recording several passes of a solo (you can record almost endlessly, as multi-take recording is limited only by your Mac's hard drive space).

Apple has also ganged together families of loops that can be selected the same way. For example, drag the Basic Drum loop 01 track into GarageBand's main window and you'll find that by clicking on the pop-up menu button, you can choose Basic Drum loop 01‚ from a menu containing loops 01 through 06. This is a handy way to audition related loops and works for both Software Instrument and Real Instrument tracks.

The Arrangements feature lets you mark sections (Verse or Chorus, for example) and copy or move them - sections marked - around your project. This is an easy way to record a verse once and repeat it multiple times. It could use some refinement, however.

For example, if you needed to adjust the end of a section - cut off a couple of stray notes, for example - you might want to treat all tracks under the arrangement bar as a unit and drag the bar to shorten all the tracks underneath it by the same amount. It doesn't do that.

Instead you have to shorten each track and then adjust the arrangement bar so it lines up with the ends of the tracks. In short: arrangements are really good only for moving and copying material, not editing it.

You can also automate a greater variety of elements, including effects parameters - the speed and depth of a chorus effect, for example - as well as reverb and echo amount and the master track's tempo. Regrettably you can't do this in real time with some kind of virtual control - a knob or slider, for instance. Instead you have to draw in the automation curves by inserting control points along a line and dragging points up or down to change the state of that parameter - for example - adding points that speed up and slow down that chorus effect.

GarageBand '08 also allows you to apply a greater number of effects to your tracks and those effects are more configurable now. In the previous version you could apply Compressor, EQ, Echo and Reverb effects as well as two selectable effects such as Chorus, Distortion and Flanger or any AudioUnits effects you installed.

The current version offers four selectable effects. Plus, the Compressor and new Track Reverb effect are configurable, allowing you to adjust the threshold of the compressor or the time and colour of the reverb effect. Previously, these just offered amount sliders from 0 to 100.

Additionally, the standard EQ effect has been replaced by the Visual EQ effect, one that lets you see frequencies represented by a blue bar within four bands - Bass, Low-Mid, High-Mid and Treble. You can drag the bar around to change the EQ within these bands and listen to the results in real time. It's a terrific way to get immediate feedback on how your adjustments affect the sound.

The program also introduces support for 24-bit recording and export, notation printing for Software Instrument tracks, and the ability to normalise tracks on export (balancing the volume). Pros and near-pros who have the gear to take advantage of 24-bit audio - which represents sound more realistically - will appreciate this feature.

The program's notation printing is fine for simple scores, but it certainly won't take the place of a dedicated notation program such as Sibelius' Sibelius 5.0, MakeMusic's Finale 2008 or Finale Allegro, or even the notation features in such digital audio workstations as Mark of the Unicorn's Digital Performer or Apple's own Logic Pro and Logic Express.

Unlike these applications, GarageBand prints just the selected Software Instrument (MIDI) track rather than a collection of tracks on multiple staves and it doesn't support lyrics.

The option to normalise tracks on export - meaning that you increase the overall volume of your file to the point where the loudest parts are pushed just below distortion and other parts are increased in relation to the loudest parts - is welcome, but in our test files, normalising wasn't enough. When processing a podcast we needed the quiet parts louder and the loud parts exactly where they were. You can achieve these results with a compressor effect applied to the master track, but we've found it easier to use GigaVox Media's free utility, The Levelator.