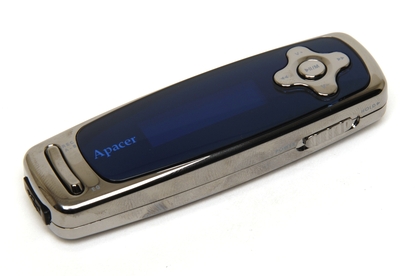 A decent but far from outstanding digital music player, while Apacer's AU581 does the basics, there are much better options out there.

Absolute My Style. We're not entirely certain what this means, but these are the words that greet you as you power down the Apacer AU581, their first foray into the digital music market. Coming in a fairly standard stick-like design, this player does the job but not much more, and sadly falls victim to many of the issues that plague these budget MP3 player clones that have flooded the market in recent times.

None of the problems are massive in and of themselves, but combined they make for a less than desirable user experience. The interface is the source of most of the issues; it is sluggish at the best of times, often taking a second or more to respond to a button press or skip a track (flash-based MP3 players are typically very fast). It is also far from eye-pleasing or intuitive, with many submenu options, such as when sorting by artist the songs appear one at a time in highlighted block text to the far left of the screen.

Another strange feature of the menu is that as soon as you enter it, your current track stops playing. Basically every other digital music player continues to pump out your tunes while you change settings or queue up another track, but not the AU581. It also falls into the trap of sorting files alphabetically rather than by track number, meaning you'll never be able to play back an album in its real order.

Aside from these issues, the AU581 is fairly standard. It comes with an FM radio as well as a voice recorder, but otherwise it's a little bare in the features department. The radio can save preset stations and has the option to record directly to the internal memory; however, reception was patchy when indoors. Meanwhile, the voice recorder operates as anticipated and will do for the occasional recording but we'd recommend a proper Dictaphone for more regular users.

Our music did sound a little flat at times but it wasn't particularly problematic so most users will be thoroughly satisfied with the AU581's performance. A number of equaliser presets are on offer including rock, jazz and pop, which also help tweak the sound to your tastes. It comes with a 3.5mm headphone jack and a pair of stock ear buds, however, as usual they aren't of a particularly good quality so we'd recommend grabbing a third-party pair.

Design-wise it resembles Sony's line of flash-based music players, with a thin, stick-like body that is fairly inconspicuous whether you slip it into a bag or pocket or hang it from your neck. It won't win you any fashion awards, but the purple and silver colour scheme looks reasonably good. The controls, however, are a little stiff, not responding as smoothly as we'd like.

The AU581 utilises a simple drag and drop interface, which makes copying files a breeze, although the process was a little slow despite supporting USB 2.0. The unit supports WAV, MP3 and WMA files and comes in 2GB and 4GB capacities.