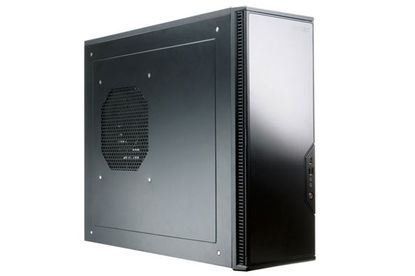 This is one of the most feature-packed cases around town. It's not cheap and it's not light, but if you've got a lot of hardware and like to tinker inside your case as often as using your PC you'll appreciate this bad boy.

Probably the most comprehensive case design to hit our test centre to date; the Antec P190 offers more than most people will need, but just what enthusiasts will love. It's quiet, roomy, has plenty of drive storage, plenty of cooling, a tonne of power and a few other excellent additions to its feature set.

Weighing a solid 23.2kg this steel giant is huge, but it's not surprising. Among other things, adding to the weight is a pair of dual-operating power supplies, which come pre-installed. They are connected via a green and black cable allowing them to work in conjunction; one 650watt power supply operates the motherboard and expansion cards while the other 550watt power supply runs the drives and other peripherals. One of the power supplies is modular, so you can add or remove cables as needed.

A total of five 3.5in internal hard drive bays are available in two separate cages, four 5.25in drive bays and one external 3.5in drive bay. The cages can be easily unlocked with one thumb screw and removed by pulling them straight out of the case.

The P190 is divided into two sections to allow more efficient airflow throughout the enclosure. The power supplies and one hard drive cage sit at the bottom of the case in a separate enclosure, while the motherboard, the second hard drive cage and the optical drive bays reside in the top half. A removable panel between the two halves allows the initial setup to go smoothly; large cables can be fed from the power supply to the components through the open panel space and then compressed together into a small through-hole when the panel is replaced.

There is plenty of cooling included, the least of which is a 200mm side-mounted intake fan aptly named the Big-Boy. At the top of the case reside two lesser, but still large 140mm fans and at the rear is a standard 120mm fan for air extraction. There's also a 120mm fan mounted between the power supplies and the lower hard drive cage drawing air from the grills at the front of the case. All of the included fans have three speed levels and a control, but the two 140mm fans and the rear 120mm fan can be controlled from outside the case using a panel built into the back panel. We love this feature!

If you need to expand on your cooling, two 120mm fan brackets on the front of the case allow for an additional set of intakes. What's especially nice about these are the spring loaded doors that gives quick access to their dust filters for easy cleaning. The 200m intake on the side also has an accessible and washable filter. Another fan can be mounted onto the upper hard drive cage using some supplied brackets, but the cage can no longer be used for hard drives.

There's no removable motherboard tray, but the case is spacious enough to make installation of the motherboard and expansion cards quite easy. An adjustable bendy light (torch) has been installed to make setup and maintenance easier in the dark, though it only runs when the PC is on, which doesn't help when removing or installing components. One of the hard drive cages has a storage box for screws and cable ties mounted to its side, and there's a good amount of space behind the motherboard tray where cables can be re-routed to keep the case neat and airflow uninterrupted.

With the fans all set to maximum speed, the noise is clearly noticeable, but expected. However, thanks to some double layering on the side panels, some dampening material around the edges of the case and some silicon grommets cushioning the hard drives, when the fans are set to low the noise levels are very acceptable.