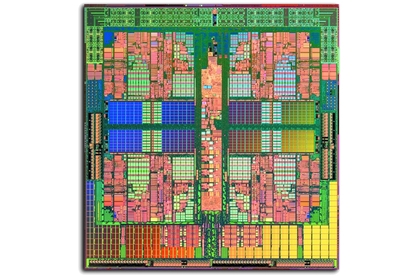 Users already using an AMD platform may want to consider an upgrade to Barcelona, but it remains to be seen if AMD will win over any new users.

The 'Barcelona' core is AMD's first foray into the quad-core CPU market, a market which Intel has had to itself since its introduction of the Core 2 Extreme QX6700 in late 2006. Barcelona is the core upon which AMD's Opteron and Phenom chips will be based, and it's manufactured using the smaller 65 nanometre fabrication process compared to its previous generation of CPUs (which were 90 nanometres).

Unlike Intel's quad-core CPUs, which are comprised of two dual-core chips in the same physical package, but on two different dies, AMD's Barcelona contains four discreet cores on the same die, which means that all cores can communicate with each other and each one has a direct link to system memory. Each core also has 512KB of Level 2 cache, but all four cores can share a 2MB Level 3 cache. Intel's quad-core CPUs don't have a shared cache (each dual-core portion has access to 4MB Level 2 cache), and unlike the Barcelona core, Intel's current quad-core CPUs aren't directly connected, which means that they rely on the front side bus in order to communicate with each other. AMD's design, in theory, should lead to a more efficient quad-core CPU, but, based on what we've seen, it's too early to tell yet whether Phenom will be able to surpass, or even match, the performance of Intel's Core 2 Duo.

AMD's Barcelona core has debuted in its Opteron line of CPUs, which are aimed at the high-end workstation and server markets, and the Phenom will follow for consumer-based PCs. The Opteron CPUs are physically different to the Phenom CPUs -- Opteron uses the Socket F (1207-pin) socket type, while Phenom uses the AM2 and AM2+ socket designs, whereas Phenom FX CPUs which are designed for the Quad FX platform also use Socket F. Phenom CPUs will be able to use low-latency DDR2 memory.

Despite all our efforts, we couldn't get our hands on a Phenom CPU, but we did test a two-socket server, based on two quad-core Opteron 2346 CPUs, running at a sluggish 1.8GHz (the speed of each core) and using 16GB of registered DDR2 RAM. The server ran a very early BIOS version, so there is still some way to go before the Barcelona platform is optimised, but we didn't have any problems getting the server up and running. We installed the AMD64-optimised version of Debian (using a GUI) on the server and ran tests using Blender.

The rendering time scaled well as the number of concurrent threads increased. Using only one thread, the 1.8GHz Opteron completed the workload in 2min 40sec, while eight threads, using 100 per cent of both CPUs, completed the same task in just 24sec -- an overall improvement of around 85 per cent over its single-thread performance.

While we didn't have time to conduct direct comparisons between servers with similar configurations, and against Intel-based servers, the www.eofw.org/bench site (which contains the benchmark that we used) has a list of results that can be used as a reference point when judging the CPU's performance. However, even the reference points should be taken with a grain of salt.

More than performance, however, Barcelona has been designed to be power efficient. It incorporates technology that can switch off different portions of the CPU and memory controller when they're not needed, and each of the four cores can operate on a different voltage, depending on the load. The CPUs are designed to be able to slot into current platforms, so AMD says they offer a seamless upgrade, but BIOS upgrades may be required in most cases. This review unit arrived just as we were going to press. Stay on the PC World Web site for all the latest test updates as we continue benchmarking and updating information on AMD's new CPUs.